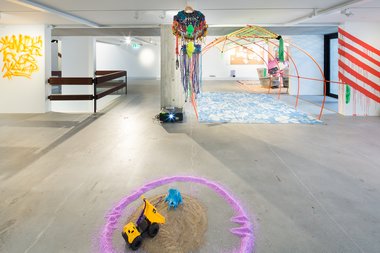 Hitchcock has brought together six creative collectives from around Aotearoa, who, in their own local communities, have been creating spatial niches for themselves to function in, one way or another. The idea is that the cavernous interior of CoCA can provide spaces within a big space that will foster social and critical discourse, and, of course, art.

MAKING SPACE/ Whakarite Wāhi is an incredibly ambitious show, curated by Khye Hitchcock at CoCA. In some ways it harkens back to the sort of challenging and confrontational exhibitions the gallery hosted in the 1970s, but it also addresses a history of patchy representation of marginalised urban communities in such spaces.

That the exhibition/intervention/installation/performance centres on collectives is particularly interesting, not only because that is traditionally where artists from marginalised communities have drawn strength and common practice for indigenous makers, but also because it’s something that the professionalisation and monetisation of art has tended to discourage in the white cubes of the “art world”. When put into that context, it can’t help but subvert it.

There is so much going on, it’s impossible to analyse each part in any great detail (nor necessarily desirable as there are cultural safety elements to be respected as well). MAKING SPACE‘s premise is that humans, being social primates, gravitate together to create a space for ourselves. That can be physical, social, conceptual, cultural or many other forms. In Ōtautahi Christchurch, during the glacially slow regeneration (thanks neoliberalism!), space is hard to come by for artists.

Hitchcock has brought together six creative collectives from around Aotearoa, who, in their own local communities, have been creating spatial niches for themselves to function in, one way or another. The idea is that the cavernous interior of CoCA can provide spaces within a big space that will foster social and critical discourse, and, of course, art.

I have no idea how that’s going to work out, because collectives tend to be their own delicately balanced closed ecologies to begin with, so bringing them together in close proximity can be unpredictable - which is partly the point. There will be cooperation and there will be disagreement, but that’s part of the organic whole of the project, and throughout the duration things will evolve and change with components moving around, being added or removed, activated with performances, and hopefully fruitful collaborations and understandings. By its nature it’s precarious; dependent on negotiated space, wary of turning into some kind of aquarium Reality TV panopticon, skirting the ever-present risk for such attempts to showcase these practices to default to an anthropological gaze.

The huge Mair Gallery has informed the overall structure of layout. The space is primarily defined by two enormous fabric-based works by Mata Aho Collective and a fully functional working studio space where The Social have set up.

Mata Aho Collective is a collaboration of four wahine who met at university: Erena Baker (Te Atiawa ki Whakarongotai, Ngāti Toa Rangatira), Sarah Hudson (Ngāti Awa, Ngāi Tūhoe), Bridget Reweti (Ngāti Ranginui, Ngāi Te Rangi), and Terri Te Tau (Rangitāne ki Wairarapa). They work with fibre to make art that comments on contemporary mātauranga Māori and that exceeds in scale their abilities to create as individuals, and are currently participants in documenta 14. Their MAKING SPACE contributions, Te Whare Pora (2012), alluding to traditional space (and state of mind) where weaving was taught and practiced, and Kaokao (2014), a particular tukutuku pattern woven when children of rank were born and also the mountainside, create a powerful binary of light and dark, and take full advantage of the volume of the space. Te Whare Pora represents a symbolic entrance to a Māori conceptual and experiential frame of reference inaccessible to Pākehā. The pattern Kaokao refers to the warrior’s stance and the birthing stance, and echoes the chevrons on the sleeves of soldiers. The work was inspired by the centennial of the First World War and the representation of women in Māori and Pākehā war histories.

The Christchurch-based collective The Social came into being in the post-quake recovery - a bunch (anywhere between three and forty) of local artists and other creative types, facilitated by Gaby Montejo, Lucy Matthews and Audrey Baldwin, coming together to make some ambitious, relevant art and have some fun, with an aesthetic that is decidedly low fi and DIY on the smell of an oily rag. They have created their own gallery space within the gallery space, attached to their attractive looking studio which to the casual viewer looks a little like the set for a TV show, but that is not to trivialise the seriousness of the endeavour. Their contribution is to do what they always do—make stuff from the found and recycled, and just be. They have a further intervention in the form of an artist residency caravan parked in Christchurch Art Gallery’s sculpture court.

The overall effect is a little like an art fair with a big warehouse-type space divided into booths. Next to The Social, Fresh and Fruity have created a safe space-cum-stage of sorts, challenging gender and other intersectional discriminations in the arts, turning the walls into a kind of materialised social media, physically writing on, or digitally projecting their manifestos on them. Founded in Ōtepoti Dunedin in 2014, but now exists entirely as a virtual entity run by Hana Pera Aoake (Tainui, Ngāti Raukawa) and Mya Morrison-Middleton (Ngāi Tahu).

Moving into the North Gallery, the space is shared by The SaVAge K’lub and the FIKA Writers group.

The SaVAge K’lub, based out of Māngere in Auckland, was established by artist Rosanna Raymond in 2010 and named in allusion to the historical gentlemen’s club, The Savage Club, but without the misogyny and racism. Raymond’s concept drew on the clichés of such establishments, and created a multi-disciplinary kaupapa to explore space, culture, hospitality, communication, and what it means to exist outside of western paradigms in the 21st century. The capitalised “VA” in SaVAge refers to the Samoan concept of a metaphysical space “between” (Wa in te reo) that is activated by human relationships and obligations.

In a sense this is what the whole show is supposed to be, but the K’lub has improvised a Va within a Va, in the form of Siliga David Setoga’s Fa’amalu: to shade, to protect (2017), which is nice. It seems counterintuitive to single out individuals, but I particularly enjoyed the humour of Julian Chote’s Lexus Song Question (2017), a sound work in which a drawn out high note from an opera soprano evolves into the car alarm of the sponsor, and Reina Sutton’s irreverent collages. I liked jess holly bates tote and pepeha (2017) with their protective rings of coloured salt, but I did wonder whether the use of menses in one sacred settler (2017) might be a point of contention with other groups and their cultural beliefs (upon revisiting a couple of days later, the blood was no longer in evidence).

Christchurch-based FIKA grew out of a CNZ workshop for emerging Pasifika writers in 2004, and are a much-needed presence amplifying the voices of Pasifika peoples in often excruciatingly white Ōtautahi. The CoCA iteration, led by Stephanie Oberg, Danielle O’Halloran, Ana Mulipola, and doyenm Tusiata Avia, with contributions by Edmund Whiteside, Jess Marama, Sarah Maindonald, Lupe Asi, Laione Masefau Asi, and Susitina Petelo, has literalised the members’ home writing spaces to create a comfortable and safe space to meet, work, connect and perform in.

The rather cumbrously named Upper Ground Floor Gallery downstairs has been taken over and made fabulous by the South Auckland-based Queer Pacific Arts Collective FAFSWAG. The collective of Jermaine Dean, Akashi Fisiinaua, Tanu Gago, Moe Laga, Sione Monu, Manu Vaea, Pati Solomona Tyrell, and the sub-collective WITCH BITCH, work in various media with very slick production values, telling their personal stories and setting up a dialogue about what it means to be LGBTQ+ and PoC in New Zealand. The glamour is armour and the camp is political. It seems a shame to have them somewhat distanced from the rest on another floor, but it does give them a privileged position of shaking up the world of customers in the café, and given that FAFSWAG’s art, of all the contributors, most closely resembles what you might expect to find in a white cube gallery (though cube painted black in this case), it’s less visually jarring this way.

I said this was an ambitious show. It has given itself a seemingly nearly impossible task of weaving an organic whole out of some very different practices and people, but, despite creaking a bit at the joins, it works.