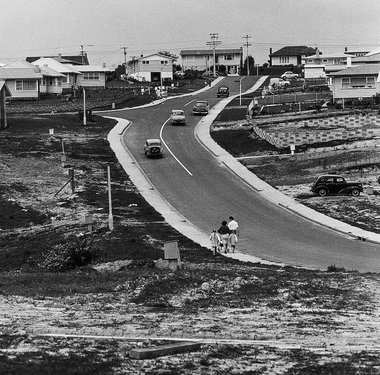 Waite's fourteen photographers can, of course, offer only glimpses of the half-century the show spans, but the overwhelming proportion have produced bodies of work (something real artists do) the historical prescience of which equals the degree of their commitment to this developing culture (something else real artists can do): the roll-call of the photographers here offering a series of stakes in the ground around which a credible and inspiring modern history may be wrought.

Group show
The Us in I: documentary photographs from the Collection

At last the Auckland Art Gallery is beginning to exhibit regularly photographs from its extensive and significant collection. Again, the long corridor on the ground floor has been used for The Us in I, a generally awkward - but accessible - exhibiting space which suits shows such as this where the imagery is mostly on a small physical scale, the long room allowing construction of a narrative which keeps the theme and the viewers moving.

This show is part of a relatively new series of Gallery collection shows called New Zealand Art: opening the present to the ever-changing past/Toi Aotearoa: mai i mua ki te ao hurihuri. As with a previous photography collection show in this space (1) The Us in I has been put together by staff curator Julia Waite and reveals a similar sensitivity to the medium’s strengths, and a readiness to approach some well-known imagery with a fresh and historically-informed contextual eye. Her handling in this new show of such an apparently conventional approach to the documentary mode is reassuring too: showing a respect for the tradition rare in current curatorial practice in New Zealand public galleries where ambition in cahoots with cleverness tends to flirt with the artier end of the spectrum.

The Us in I (a rather clunky title, it must be observed) consists of 46 black and white photographs in public spaces by fourteen photographers (2) and as the labelling informs us: “Dating from the 1940s to the 1980s these carefully constructed images reveal the complexities of life in New Zealand during a period marked by both upheaval and optimism.” Even in the 1980s, when the majority of the show’s participating photographers were starting to be considered as “contemporary artists”, there were very few public galleries willing to exhibit their work in such a configuration as The Us in I. Even now it’s rare. One of the remarkable aspects of this show, and one giving hope as well as reassurance, is that its curator is one whole generation away from the making of the most recent images and so for the curator the period covered is history, not part of lived experience.

This enables a new perspective, not so much on the period covered (because “revisionist” historians have been more explicit, and earlier) but on how photography has been a vital visual element in our culture, employing modes of documenting yet to receive their due acknowledgement among curators and the people who, in Australian historian Manning Clark’s imperishable phrase, “know what’s what”. Photography has its own kaupapa and wairua, but it’s been colonised by the art world in much the same way Pakeha expected Maori to assimilate during the century-plus after 1840. Our way or the highway. It’s become standard for public institutions to sub-title with Maori names, but just how far this ink soaks into the blotter of history and energises current professional practice is highly debatable. The same resistance applies to the medium of photography too.

Waite’s fourteen photographers can, of course, offer only glimpses of the half-century the show spans, but the overwhelming proportion have produced bodies of work (something real artists do) the historical prescience of which equals the degree of their commitment to this developing culture (something else real artists can do): the roll-call of the photographers here offering a series of stakes in the ground around which a credible and inspiring modern history may be wrought.

Modernism’s utopian project was, in part, a denial of history, and still in that significant movement’s penumbra there lurks an unease with the ‘then’ notion of history, trailing in its wake connotations of ‘stale’, ‘old-hat’ and ‘irrelevant’. But for most non-European cultures, untouched by Modernist aspirations, history is a ‘now’, eternally present. Much the same can be said about the medium of photography.

Such an understanding underpins the exhibition policy of the Auckland Art Gallery and the curatorial ambitions of its curators, and partly explains why it remains, easily, the premier art museum in this country. Bravo for The Us in I. More please.