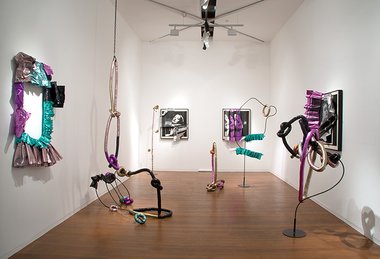 Two shows in particular stayed with me, not least because they counterpointed each other in orbit around a common centre. That centre is hard to define and has blurry edges, but let's call it an oblique critique of sensibility. Taste is a received, rather than an intrinsic quality, and the world panders to its panjandrums of social class and Salonfähigkeit.

Traipsing around the dealer galleries of Sydney’s Darlinghurst is a pleasant enough pastime among the terraced Victorian houses with their wrought ironwork in their prospect of tropical foliage and rainbow flags.

Two shows in particular stayed with me, not least because they counterpointed each other in orbit around a common centre. That centre is hard to define and has blurry edges, but let’s call it an oblique critique of sensibility. Taste is a received, rather than an intrinsic quality, and the world panders to its panjandrums of social class and Salonfähigkeit. Kitsch, for an example, got a very rough seminal treatment from Clement Greenberg (largely, one suspects, and not unreasonably, because of its associations with the aestheticized politics of anti-Semitic and genocidal Nazi Germany and Cold War horrors of the Soviet Union).

If we take a slightly more generous approach to kitsch, we may try to reframe it as emerging from a familiar and relatively universal sentimentality; a natural, comforting and humanistic response to everyday existential angst - an aesthetic security blanket. But what of other such “problematic” modalities of taste, and what if they are equally as complex, and even political in as much as the personal is political? How can artists use this to carve out more territory in the privileged space between artist-maker and art-viewer?

At Roslyn Oxley9 Gallery I was struck by a marvellous show by Sarah Contos, Daughter Universe, challenging not least because at first glance it appears to be, without any irony, camp as Christmas, and I fell in love with it instantly. Camp has long been both a slightly apologetic signifier and shield, and a political challenge, particularly for gay men. I have never been particularly comfortable with Susan Sontag’s assertion that Camp (in her 1964 proto-listicle ‘Notes on “Camp”’) was not to be considered “in terms of beauty, but in terms of the degree of artifice, of stylization”, or that “Camp sensibility is disengaged, depoliticized — or at least apolitical”. That is an anthropological view from the centre, outside the margins.

Contos’ theatrical confections, for all the ruched metallic fabrics, pressed roses, mannequin hands, and publicity stills of Gloria Swanson from Sunset Boulevard (1950), are very much profound, political and beautiful. They fall into similar material territory to Jacqueline Fraser circa 2000. Their frisson comes from their interplay of emotional attraction and repulsion. Without getting into the tired old chestnuts about handcraft and women’s art, the work has a strong feminist backbone in its salvage of feminine tropes (the deliberate artifice, the hyper-feminine drag of it highlights the performative nature of gender) and defiant, escapist riposte to the top-down norms of a (still) patriarchal art world.

Sociologist Andrew Ross, in his book No Respect: Intellectuals and Popular Culture (1989) argues that camp is an act of personal liberation from the constraints of capitalist hierarchy, creating a parallel and independent system of surplus value, glamour and luxury by rehabilitating forgotten or marginalised forms of labour in a distorted echo of the elite. Taste, after all, is only possible through exclusion and the hoarding of cultural capital. It reacts against the vocabulary of minimalism and modernism the way the Rococo reacted against the grandeur, monumentality and classicism of the Baroque (which is, perhaps, why one of the sculptures is named Fragonard). Fabulous.

Around the corner at Martin Browne Contemporary is Linde Ivimey’s The Shape of Things (25 May - 18 June 2017). Here, too, the work has elements of camp in it, but this is subsumed into something darker and more macabre, but at the same time just as beautiful and playful. Animal bones, jewels and feathers form an important part of the artwork, translating into cheeky little faces or aeroplane tails. The effect is a little like being in a Central European ossuary, and indeed the animal bone chandeliers strongly recall the human bone ones in the Sedlec Ossuary in Kutná Hora, Czech Republic.

The majority of the sculptures take the form of dolls, little hoodoo puppets in faded velvet finery that are also conceptual portraits of people who have taken the artist’s fancy. Niloofar, in her pantomime aeroplane with her propeller hands, represents Niloofar Rahmani, Afghanistan’s first female fighter pilot. Carstairs, wearing her boat, is Joe Carstairs, the British power boat racer. Their bone heads, hands and decorations mingle with suggestions of decadence and consumption in the form of the foils and collars from champagne bottles. Titula on her golden throne of foil in her black hoodie with the bone zipper, is a self-portrait. Each keeps its secrets and hides little details in their construction. They would look at home clutched by a child in an Edward Gorey drawing.

Other works have a more fetishistic and primitive quality to them. Prince and Darkness are two humanoid two-headed rabbit creatures studded with donated human teeth. There are resemblances to some of Francis Upritchard’s sculptures, but without so much of the troubling museo-anthropological context. Pusi-Tupi is a two-headed (Pushmepullyou style) rocking, covered in a mesh of chicken vertebrae, that looks like a refugee from the Addams’ Family nursery, and radiates personality and presence. The double heads are just one example of the duality that abounds in the work. There are dolls that are invertible on the well-worn pattern (turn them upside-down, flip their skirts and they’re a different doll) or have oxymoronic names like Happy Accident, Good Grief, and Bittersweet.

The most imposing work in the show is The Horseman, an allusion to Armageddon. A life-sized figure of a child (the “creepy child” trope in full flight), dressed head-to-toe in turkey bone mesh, with cow bones for fingers and wearing a jewelled and feathered diadem, dangles four cartoonish prancing humanoid ponies as marionettes (the Four Horsemen of the Apocalypse). Is the child death, god, named or unknown? The sculptures, for all that they play with certain Victorian-Gothic tropes taken up by subcultural fashion, are more than merely morbid curiosities. They are memento mori that bring the materiality of the body and ever-present mundanity of death, at its most carnivalesque and poetic, into the clean, white cube of the art gallery, and do it with panache. They force us to reconsider are presumptions about taste, content and beauty.