Painting As Object (Once More) 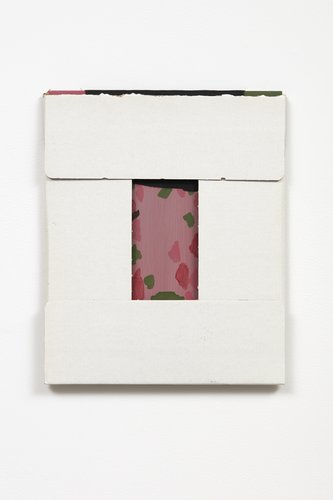 Of course the notion of ‘objectness' of contemporary paintings is not remotely new, as any student of Synthetic Cubism or Constructivism knows, and which is borne out by events like the opening in Christchurch Art Gallery next week of Don Peebles' superb construction reliefs from the sixties. But it is intriguing to see these issues, often discussed by critics like Greenberg in terms of the picture plane, raised again within a new contemporary context.

An exhibition put together to emphasise the painted stretcher or glued on panel as a palpable object (that is looked at, and not through) Materialised is an exciting array of nine unusual works , two of which are from overseas artists in Ireland and Belgium not normally presented in this part of the world. This novelty factor makes them the stars of the show, as their contributions are exemplary, yet really everybody pulls their weight equally. No fizzers anywhere. It’s all consistently good. Very.

Glen Snow contributes a very long, somewhat dry, essay that is out of place in a dealer gallery (non-university) context. Instead generalising about the essays of theoreticians like Isabelle Graw (who looks at painting’s production of signs as an activity that is now ‘medium unspecific’) and Jane Bennett (the intrinsic vitality of materiality) my view is that he should have focussed on the materiality, ‘objectness’, or ‘pictureobjectness’ of the works we see in the space, and what pressed his and Rohan Hartley Mills’ ‘buttons’ when they put this exhibition together - the specific details of each artist’s method that led to their selection. For some of the chosen, like say Kim Pieters, it is not obvious. I think she contradicts the materiality principles with a thin, vaguely rectangular horizontal ‘window’ that , despite its delicate stained and cursive graphite textures, creates an illusory sense of dark blue space far beyond the wall.

Of course the notion of ‘objectness’ of contemporary paintings is not remotely new, as any student of Synthetic Cubism or Constructivism knows, and which is borne out by events like the opening in Christchurch Art Gallery next week of Don Peebles‘ superb construction reliefs from the mid-sixties. But it is intriguing to see these issues, often discussed by critics like Greenberg in terms of the picture plane, raised again within a new contemporary context. (With his chosen writers Snow focuses on artist agency, and indexical or performative aspects to do with the Self, rather than formal properties within materiality).

Both the curators, Mills and Snow, contribute fabulous work. Snow has a gridlike construction of laminated hardboard where different sections have had the outer veneer peeled off, with rubbery flattened blobs of squelchy acrylic and builder’s fill positioned over the front plane and edges. Rohan Hartley Mills has a two piece painting where a small skinny unit hovers above a larger rectangle ostensibly held in position by four pieces of dowel positioned in its corners. The three medium-toned green shapes on the canvases are quite disorienting in terms of lack of alignment and implied, mentally extended edges creeping across the wall. They avoid matching up, and this indifference - a potentially irritating lack of co-ordination - is obviously deliberate; a Godardian or Brechtian strategy of ocular disruption.

Judy Darragh‘s spontaneously created work - using a prism, a wide daub of hot orange, some swirling transparent gel and a bed of milk chocolate texture that shows indentations of bubble wrap - provides a sense of speed and avoidance of extended contemplation within its process. Darragh’s different textures and translucencies work well, and are a clever foil to the silk and oil work by Selina Foote next door along the wall, with its five vertical gaps (in the painted silk) that expose the background wall behind her chopped-up topographic-like contours: cascading diagonal black bars hurtling across the rectangle.

It would be fun to put a selection of John Nixon‘s imposing constructions alongside those of the Don Peebles show that I’ve mentioned. Nixon’s wooden protrusions tend to be centrally dense, and are clustered and diagonal, celebrating an ongoing working process, whereas Peebles’ are more diffuse, cling to a frame, use perpendiculars, and are very cognisant of an intelligent, determinedly curious, moving viewer examining a final end product.

Noel Ivanoff‘s painting/packing case combination - where two functionalities merge - clings to the floor, and is in two parts which are spread far apart. They interact intimately with the architecture, particularly its planar wall or column edges, or vertical/horizontal planar joinings. The method of protection during transport is inseparable from the conveyed object of scrutiny.

AT Biltereyst makes intimate little grid paintings, usually blue on white, that appear to use stencils but which also enjoy showing bleeding ‘accidents’. His designs are compellingly inventive, with lovely negative spaces incorporated, and nice diagonal versus horizontal tensions. The works have an appealing compactness that leads the eye to the frontal plane with its delicate design so carefully constructed.

Fergus Feehily‘s pink and green painting nestles inside a folded cardboard pocket so that it is exposed through a central window with a sliver of a top dark edge peeking over the top - the white cardboard here being torn and beautifully battered. The notion of a cardboard mask or screen being incorporated into the work is intriguingly radical, an alternative to overpainting that really does declare this work to be an object.