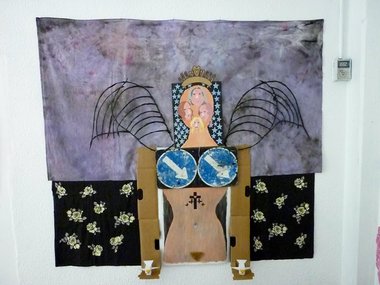 Quotation predominates in this show, both literally and contextually. The former takes the guise of statements, simply written out on rough cardboard or bits of cloth, in crude capitals with a black marker pen - all which have the appearance of a citation. But they are in fact proclamations invented by the artist (he has collected a book full of them), with a little help and influence from English artist and fellow 'slacker,' David Shrigley.

You are passing another fox

Slacker art, if somewhat loose round the edges in terms of medium and craft - bits of old torn cardboard, pieces of dry macaroni, odds and sods of detritus cobbled together slapdash ways - needs to be tight in other ways for the art to maintain credibility. That tightness circles around notions of conceptual ingenuity. The trade-off is sloppy means in exchange for insightful ends.

Take for example, Thursday Night/Friday Morning (anatomy of a crash). The piece consists of a found object discovered by the artist lying on the side of a street one night. It’s a scenario which has all the hallmarks of a Kurt Schwitters creation, the German Dadaist who trawled the gutters for his source material. What Scott found was a broken toy truck, made of wood (one of those homemade jobs) discarded and damaged, but the perfect object (symbolically and artistically) for a slightly distraught artist out on the town and out of accommodation. He took possession of it and proceeded to paint various components of the broken toy in bright primary colours. The end product, slightly rearranged but left dismantled, became a kind of broken down deconstructed abstract sculpture with a nod to the Russian Constructivists.

This altered readymade looks both forward and back, conflating antithetical art movements in an astute and perceptive manner, a modern/postmodern triumph.

Quotation predominates in this show, both literally and contextually. The former takes the guise of statements, simply written out on rough cardboard or bits of cloth, in crude capitals with a black marker pen - all which have the appearance of a citation. But they are in fact proclamations invented by the artist (he has collected a book full of them), with a little help and influence from English artist and fellow ‘slacker,’ David Shrigley. Thus statements like It may prove ethically impossible to grant your request on such a scale possess both an ersatz profundity and an arcane truth, while sending itself up at the same time. Irony undercuts the very declaration via its low-rent delivery which adds to the dialectic. Shades of McCahon - but at a much less grandiose level.

Art historical quotation is directly present in a work that specifically references the neo-classical, Ingres, and his work, The Golden Age, the title which Scott simply appropriates for his own version. But the classical figures in the original painting are reduced to near cartoon ciphers, drawn in marker pen on brown builder’s paper with anything but classical proportion. They are further compromised with the addition of photocopied cuts outs of eyes and mouths pasted on faces, complete with exaggerated genitalia. Cynical generation Xers are well done dreaming of utopias either metaphorically or literally, past, present or future.

The overall tone of the show is one of mordant wit, mockery, punmaking, but definitely foxy, caught in the title You are now passing another fox.

There is no fetishism of the art object here, although the works in contradiction to that do come with a price tag. Scott quotes Jeff Nuttall in Bomb Culture to the effect that a moral tone associated with art is a kind of “sickness”, yet many of the works in the show display an ethical tenor, albeit sometimes an ambiguous one. The work Equal Rats (punning on equal rights) subverts the notion, but the inclusion of a Mickey Mouse figure suggests another level of engagement lurking beneath the cynical humour.

Hold All My Calls is a work that cleverly ridicules the corporate business world by consisting simply of an old wire coat-hanger over which is draped a worn and slightly soiled white singlet, complete with black tie. Other targets include those opposed to same sex marriage. The work simply consists of an old faded yellow clipboard attached to a printed flyer that begins Do you know what is happening in New Zealand right now! after which it launches into a diatribe against reform. The clipboard is the perfect frame and foil for the text.

Scott also has fun with sex. In Thwart Your Imperative, an appropriated illustration from a 1950’s textbook involving two innocent teens, seated opposite each other with their hands covering their eyes, is juxtaposed against a magnolia seedpod that looks very phallic.

Scott shows enormous inventiveness and astute perception with use of Dadaist mediums to deliver, via acerbic wit, commentary on a variety of diverse topics. An artist to watch.