Tricks of the Light 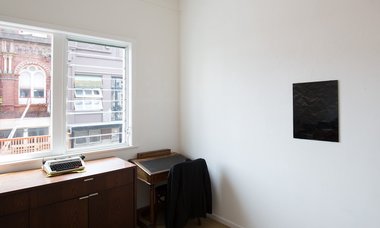 By a spooky coincidence Cauchi's show opened at McLeavey's the same night as people were being evacuated from Christchurch's Port Hills - at the height of the threat to property and lives from the fires spreading so rapidly and unexpectedly over the landscape - later aerial photographs having an uncanny resemblance to this new set of ambrotypes. As Oscar Wilde once observed, typically provocatively, art doesn't follow nature - it's the other way round.

Photography was invented in the mid 19th century as a scientific tool to describe things more accurately and in a less time consuming way. But the better processes became technically in recording the appearances of objects, places and people, the more their substance seemed to slip from our grasp. It’s one thing to delineate the subject-matter but another to fathom what its reproduction might mean to us. A costume expert, for example, may examine a carte de visite for details of Victorian dress, but the person wearing it was definitely someone’s daughter and probably someone’s mother.

Within this gap between evidence and response arose the enduring enigma of photography. Little can be more “ordinary” than around ninety percent of the medium’s subject-matter, yet persistent viewing of the images seems to multiply the possibilities of sheer strangeness. Such “stilled life” is not still at all: it generates an imaginative expansion at a rate to excite bacterial envy.

Ben Cauchi’s work has long charted the parameters of this enigma. He emerged at the end of the nineties, a time of questioning of the medium’s linear progression technically from Daguerreotype to digital, when practices deemed extinct under Modernism were being revived - such as the ambrotypes Cauchi habitually uses - activity which inadvertently caused a reassessment of the very nature of photography and undermined the assumptions on which histories of the medium had been constructed. In 2015 Paris’s Centre Pompidou staged a show called, simply, “What is Photography?” and it’s a good question.

Earlier on, Cauchi didn’t just use an apparently antique process, he reinvented antique subject-matter. This generated a range of unease. Firstly, he seemed to be transgressing the Modernist cults of originality and now. Secondly, in terms of the medium’s signature contemporaneity, he seemed to be stuffing time back into an old bag. But, thirdly, and closer to home (and the bone), his strategy seemed to be picking at the scab of our colonial history. His 2002 Loaded Palm - an outstretched left hand inked with the word “Pakeha” - was an early still for a “cinema of unease” even more uneasy than the one on the Film Commission’s slate.

Over the past decade and a half the range of his seemingly limited imagery may have developed and its subtleties shifted, but continuing threads running through it are a fascination with the way light works and a meditation on the mysterious ways history infuses the present. Formally, his early signature work presented tableaux, small shrines to the mysteries of light and time at the core of the photographic medium, at once offering reassurance of the objectness of things while posing questions concerning their veracity in reproduction. The many backdrops in the images became symbols for the backdrop of doubt raised in viewers’ minds about what might be “true” about Cauchi’s photographs.

In recent years the tableaux have tended to be cleared away and the backdrop has advanced to the fore until it alone has become the apparent subject-matter. Indeed, Cauchi’s previous show at this gallery in 2013 was entitled The Thin Veil, A Subterfuge (1). In Aether this strategy has become a depthless experience: any horizon line has dissolved, there is no left or right, no up or down. The new “fore-drop” lacks any referents of scale or orientation. It’s pretty obvious, though, that the “real” subject-matter is (or was - see how sticky time-wise things can get with this photographer?) intensely creased paper. He’s unlikely to be developing an interest in origami, so what’s the buzz with this paper angle? Forget about the paper: it’s just providing an opportunity to further his explorations of form and light - and quite possibly the intersection of “then” with “now” as well.

Cauchi’s now Berlin-based and this is his second show in the Capital since the transition, and while light behaves largely the same there as here, how history works is a very different dynamic, and this is beginning to show up in his approach. Germany’s capital has claims to be the most politically important centre in Europe right now, and some claims to be, perhaps, the most important centre artistically in the world, and perhaps this platform provides the more global aspect suggested by Cauchi’s new images.

His earlier querying of the colonial project seemed pretty much a local, New Zealand, focus, in part constituting a quiet but sustained rebuke to Pakeha complacency about the long-term effects of exploitation, not just culturally but environmentally. He’s not by nature a scolder though: his approach is much more subtle. By constructing his visual conundrums that undermine confidence in the veracity of photographic imagery there’s a parallel doubt implied in the assumptions of superiority underpinning the colonial project. The two go hand in hand. Cauchi’s signature subject-matter - the games of chance, the sleights of hand, things not quite seeming what they profess to be - are all the strategies of colonialism, but ones whose temporary advantage can turn rancid within a generation or two, reducing claims of progress to accountable sins of the fathers.

It turns out we’re having to pay a big price for the material progress of the past two to three hundred years. The slow build-up of environmental degradation is now rapidly turning into a kind of climatic rage, its implications still not registering with the majority of humankind.

One reading of Cauchi’s eight enigmatic new images may perform a not wholly welcome antidote to this scenario. What the creased paper subject-matter of these ambrotypes can depict is not so much a birds’-eye view of topography as one from the International Space Station, the dark and spare crinklings symbolically suggesting a ravaged, unproductive and unpeopled landscape. It’s perhaps ironic that such a seemingly anachronistic photographic process (2) is capable of seeing into the future.

Last October photographer Edward Burtynsky had a show at Hexton’s Flowers Gallery in London, coinciding with the publication of his book Essential Elements. The exhibition was reviewed in the Guardian Weekly (3) under the title “Looking down on a ravaged earth”, and the critic wrote: the “… Canadian photographer has devoted his career to capturing man’s impact on the landscape from above, elevating the brutish debris of slag heaps and open-cast mines into sublime wall-sized hymns to how we’ve made our mark on the surface of the Earth. … his aesthetic: images are pumped up until the picture plane is flattened into a surface seething with granular detail, or what he calls ‘ the democratic distribution of light and space across the whole field’, a neutrality that encourages the eye to wander.”

By a spooky coincidence Cauchi’s show opened at McLeavey’s the same night as people were being evacuated from Christchurch’s Port Hills  - at the height of the threat to property and lives from the fires spreading so rapidly and unexpectedly over the landscape - later aerial photographs having an uncanny resemblance to this new set of ambrotypes. As Oscar Wilde once observed, typically provocatively, art doesn’t follow nature - it’s the other way round.

(1) Reviewed on this site by this writer: 28 October 2013.
(2) At Christchurch Art Gallery’s current, high profiled photography show The Devil’s Blind Spot one of the supporting texts refers to earlier photographic processes as “anachronistic”. Of course, when the mission of the show is announced as illustrating “a range of strategies to make photographic art in the digital era” it’s strategic itself to downplay - even denigrate - earlier practices which are, more neutrally, simply “historical”. “Gothic” architecture suffered the same fate in the 15th century and, more recently, indigenous people have borne the indignity of being described as “primitive” by their assuming betters. Cauchi’s new work offers its own pertinent rebuke to the shallowness of that “anachronistic”.
(3) 14 October 2016, p.40.