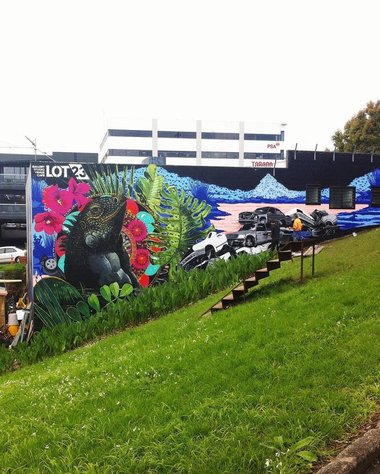 The mural draws from both practices, at first glance seeming closest to Howard-Smith's work. On looking deeper, other recognisable imagery becomes apparent: is this yet another possible future of Carisbrook? Painted over a few days, the mural not only overflows with the lush greenery and immense, godlike animal presence of Howard-Smith's paintings, but it also incorporates the rubble of Novak's 'Brook Project', presenting another utopian future for this disused space.

Remnants of cars pile up in a haphazard heap, fields of rubble stretching endlessly out behind them into the distance - but the sight is far from bleak. Vibrant tendrils of green creep out towards the old machinery, slowly engulfing all in a glorious burst of leaves and flowers. A chimera-god serenely watches from among the leaves.

Not quite a vision of the world as it stands today, but perhaps not far removed. This world does, after all, feel nigh on apocalyptic. Indigenous, environmental, spiritual rights are still being challenged; natural disasters are shattering recovering communities; contemporary, political “democracy” has been exposed, once again, as a sham. In such an environment, surely the search for utopia is at best a dream; at worst hopelessly naïve? And surely to seek it through art is simply futile!

In fact, utopia comes from the Greek “no place”, a neat translation of a complex idea. Utopia originally meant any fictional, non-existent society; over time the word has blended with the eutopia, or “good place”, to mean a society that is considerably better than our current one.

Street-art, graffiti, and other public art forms have a unique ability to form a new version of democracy. In Art and Agenda, the author states that “Instead of searching for more democracy only in the realm of professional politics, [artists can] draw attention to the new atmospheric conditions of democracy, to a complex set of technologies, interfaces, platforms, networks, and media that allow things to become public” (1).

Art in public space delivers politics into the hands of the people. That is, after all, where it belongs - politics is derived from the Greek Politikos, meaning of, for, or relating to citizens. This form of democracy can be as simple as a few lines of paint. Much graffiti consists simply of a tag, a name, painted in defiance: “I am here. I exist“. Other public works actively seek to incite positive change, engaging the viewers/participants in the imagining of a new system, a new structure, a new world. In other words: the possibility of a utopia.

Aroha Novak and Guy Howard-Smith are Dunedin-based artists whose practices, though at first glance wildly dissimilar, intersect through the exploration of utopia. Guy Howard-Smith is a painter, the creator of extraordinarily lush, hyper-realistic images that sit comfortably within gallery spaces. Larger works can take up to two years to complete: no detail is left out, and his vibrant worlds speak both of an idealistic future-space, and the potential dysfunction of seeking such a space. In contrast, Aroha Novak uses a variety of materials in her practice - from mural-based spray-paints to hand embroidery, from knitting to moving images - and her work is often site and community specific. Novak’s work seeks to be activated, physically engaged by the public; Howard-Smith’s allows for more meditative “white cube” viewing. The artists employ two very distinct methodologies and yet they meet halfway, both in their interrogation of contemporary urban systems, and in the resulting co-created public murals they have worked on together (2).

Recently, their work has merged again in the joint show No_Place at LOT23, Auckland. Combining Howard-Smith’s paintings with documentation of Novak’s recent Brook Project, the show culminated in a large, joint mural painted on the outside wall of the Newton-based gallery/studio space.

Howard-Smith’s paintings draw on his childhood spent in the Titirangi bush, as well as wild - and largely fictional - tales his family told him of his father’s upbringing in India. “As I got older and found out that half these tales were completely made up, I built on them rather than discounted them” (Howard-Smith, 2016). The resulting images, drawn from his subconscious, build up into a series of “realistic unrealities”. In these worlds, gods walk amongst humans and nature rules the Earth once more. It strikes me that Howard-Smith’s work follows in the path set out by those such as Ursula le Guin, who use science and fantasy fiction as a mirror to hold up to society. These fiction-based works challenge rather than emulate the apathetic escapism promoted by current media models. Far from being worthless, stories and inner narratives can reveal and encourage a greater understanding of relationships with self and society. They invite curiosity and deepen awareness.

If Howard-Smith’s paintings allow for introspection in their method of making, imagery and gallery setting, Novak’s work looks further outward. The Brook Project focused on Carisbrook, once a nationally significant sports stadium that now exists only in a state of rubble and decay. “The site of Carisbrook was a shared space, but had been bought and sold to private investors - the fences kept people out, psychologically and physically, (but not completely) and the sale of land still couldn’t negate the memories and history of that site… the general public claim ownership through being able to walk through the land whenever they want to” (Novak, 2016). Intending to celebrate the history of the site, as well as re-open a conversation of ownership and potential, Novak created a series of books, left open in community spaces, such as the local library, for the public to write their dreams and imaginings for a possible future Carisbrook. These then became fuel for a series of public interventions, including performances and installations. Novak hand-embroidered words onto flags, referencing the past, present, and possible future of Carisbrook, and hung these on the site fences for the duration of the project.

In the conclusion to an essay, I once wrote that “for art to be successful in a public space, each work must stand alone, influenced by the social and cultural environment around it but open to the scrutiny of a wide variety of people and understandings.” To take an artwork out into the public sphere is a brave act: it opens up a dialogue, which in turn leaves the work vulnerable to unforeseen interpretations and engagements. During the Brook Project, flags were taken from the fences - I hesitate to use the word “stolen” as it implies prior ownership; once the flags were placed into public space, they then belonged to the public, for the public to interpret as they chose. If someone chose to interpret the works as covetable, then that was simply another outcome of an already open project.

In No_Place, there is an interesting contrast at play: Novak’s Carisbrook work, accustomed to being in the open and for the public, has now become document, contained within gallery walls. Down the road at ARTSPACE, as part of the New Perspectives show, a literal enactment of the Brook Project flags hung on another chain-link fence, though this one did not enclose an abandoned lot but lead tantalisingly into a cosy library space. In the LOT23 show, the documentary aspect of the piece was far clearer, with images of the initial flag works now printed to hang on their own flags.

While Novak’s work explores new gallery confines, Howard-Smith’s has ventured outside. Walking from inside the LOT23 gallery to the outside mural, it is as though the paint had crept from the canvases to encompass the world beyond. His utopian worlds, filled with lush rainforests, now grow beyond the white cube spaces. I have to admit I am most drawn to this aspect of his work. The idea that you could come across visions of utopia in a chance encounter, an unexpected moment on the street, is enormously appealing.

The mural draws from both practices, at first glance seeming closest to Howard-Smith’s work. On looking deeper, other recognisable imagery becomes apparent: is this yet another possible future of Carisbrook? Painted over a few days, the mural not only overflows with the lush greenery and immense, godlike animal presence of Howard-Smith’s paintings, but it also incorporates the rubble of Novak’s Brook Project, presenting another utopian future for this disused space.

In opening itself up as a post-apocalyptic study, the mural mirrors the present Carisbrook, where nature - in the form of grasses and mosses - is already beginning the slow reoccupation of this deserted space. Should we use such an apocalypse to lead a new, human reimagining of the space? Or do we surrender our ownership, and attempt to exist in symbiosis?

The very point of utopia is that it can never exist, but that does not make it a futile pursuit. By questioning our current systems and structures through art, artists such as Novak and Howard-Smith refuse to let us fall into complacency. Of course serious change takes more than a few embroidered words or surreal images, but by engaging with these images, by starting these conversations, we can begin to imagine a better world - and sometimes the tiniest catalyst is all it takes. 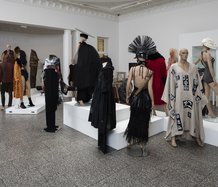