Behind the Bamboo Curtain 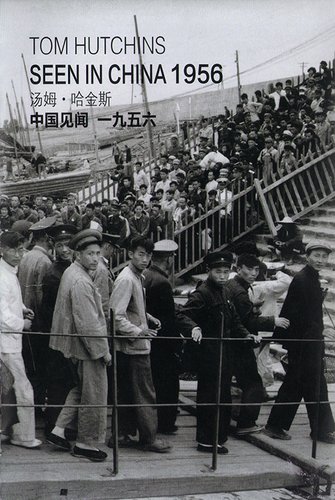 As illustrated by this book, Hutchins’ roving eye overwhelmingly settled on people, and although many of his subjects are clearly curious as to why this foreigner was photographing them, most seem to be taking it in their stride. The style is pretty standard post-war photo-journalism and a testament to the belief of a concerned photographer that the medium could make a difference: from simply providing factual information to showing that most Chinese lacked horns and a tail.

Tom Hutchins photographs
Selected by John B Turner with introduction

China. Where to begin? In 1939 Winston Churchill described Russia as “a riddle wrapped in a mystery inside an enigma” and the same could be said of China. His statement continued though, with “but perhaps there is a key. That key is Russian national interest.” While there is nothing special about national interest driving policy and actions politically, in the 20th and early 21st centuries China’s history might constitute a special case. And for the rest of this 21st century its national interest is bound to impact very significantly on world affairs. For better or worse only time can tell.

This great nation with a long and important history remained essentially feudal until the middle of the 19th century, untouched by political developments elsewhere simply because the Chinese saw no reason to take any notice. China was China, centre of the world: end of story. The “foreign devils” completely de-stabilised the established order in the second part of the 19th century, a situation the Japanese took advantage of in the early 20th, followed by the civil war from which Mao Zedong and the Communist Party emerged triumphant at the end of the 1940s. At that point the country turned inwards once more - perhaps for the task of Making China Great Again via Mao’s revolution - excluding the foreign devils from its hopeful territory.

Some of those sympathetic to the Communist cause had access though, and for New Zealanders the conduit tended to be Rewi Alley. Once Stalin’s excesses became clear after the Second World War the gloss came off the Russian revolution, and many socialists worldwide transferred their allegiance to Mao’s China. The iconoclastic Cultural Revolution over the decade following 1966 took the gloss off the Chinese revolution too, and since Mao’s death in 1976 China has taken a zig-zag course politically, striving to find a workable balance between revolutionary ideals and the seductions of capitalism. Over that time too its borders have become as porous as any others in terms of the movement of people and capital, leading to an astonishing rate of economic growth that, so far at least, seems able to sustain itself. Political progress is another matter, and how the Party leadership deals with a growing, ambitious and impatient middle class, remains to be seen.

Back in the 1950s, as the Cold War drama between the United States and the Soviet Union reached a stalemate, closed-off China seemed a minor player off in the wings. Yet the bogey of Communism prevailed and any “fellow travellers” were regarded with suspicion and subject to surveillance and often harassment.

Australian-born photographer Tom Hutchins (1921-2007), like many non-religious humanists of his time, naturally had sympathies with the socialist cause and was proud to be numbered amongst what used to be called “concerned photographers.” He unequivocally identified as Marxist. Hutchins grew up in New Zealand, Auckland was always his town, and journalism remained the focus of his ambitions. In 1952 he became chief photographer at the then Auckland Star, the city’s evening and relatively liberal paper, until that is, he obtained a visa to visit China in early 1956. That was enough to have his employment terminated - such was the intensity of anti-Communism at the time.

As John Turner’s and William Main’s 1993 New Zealand Photography from the 1840s to the Present profiled (1), Hutchins was a passionate crusader for positive social change. In his part of the book, pages lifted from the newspaper in 1955 revealed Maori housing conditions in what was then a rapidly-growing city, hosting a significant tribal diaspora from rural to urban. The following year he was in China, then less than a decade into its revolution’s post-civil war implementation, clearly keen to get some kind of fix on what was happening but determined to be as detached as humanly possible, letting his documentary approach lead the way rather than his ideological convictions. It was a tall order.

Turner’s new book about this early China work - the first time a substantial amount has been published - reveals that Hutchins did pretty well at remaining a non-judgemental observer. Given China’s massive shift from feudalism to modernism, probably no one knew what new social patterns may have been forming outside of the ideological agenda, so all a photographer could do was look and shoot. Like many documentary photographers before him and since, what he recorded most of all was a time of transition, a people in flux. The book mirrors this rather impressionistic approach, having no discernible sequence illustrating subjects or themes. It could be just a taster though, as Turner appears to have plans for a more extensive publication eventually.

In the mid-1950s American journalists and photographers were actually forbidden by the US government to enter China, so Hutchins’ work there was sought after. He had worked for Life magazine before (2), but in 1957 a portfolio of his China images was published in an article called Red China on the March, the title itself suffused with an anxiety then common in the “free world”, perhaps more starkly expressed by the phrase “red menace.”

At least as illustrated by this book, Hutchins’ roving eye overwhelmingly settled on people, and although many of his subjects are clearly curious as to why this foreigner was photographing them, most seem to be taking it in their stride, giving the work a naturalness and sense of catching daily life as it was happening. The style is pretty standard post-war photo-journalism and a testament to the belief of a concerned photographer that the medium could make a difference: from simply providing factual information to showing that most Chinese lacked horns and a tail.

For us, then, China was a mystery, a curiosity and in terms of daily life here, pretty much a non event. Sixty years on this body of work represents a rare, early connection for us, now, when China looms large on our horizon economically and politically, and people of Chinese origin increase steadily as a major component of our population. Tom Hutchins’ lens seems like an early focus on a new direction.

(2) His first contribution, at 26, was a dramatic view of the fire that destroyed Christchurch’s Ballantynes department store in 1947.