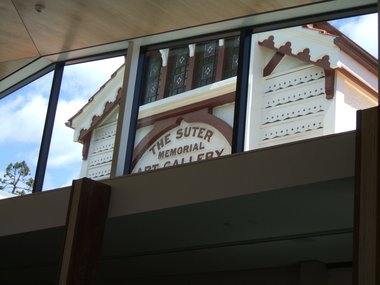 The original Suter building had been much altered over the years and the key decision was made to retain and restore it. Also retained was the adjacent theatre built in 1979. Everything else went. With these two remaining givens, the constraints of the limited site and a need to respect the Queen's Gardens environment were the challenge for the joint team of architects - Jerram Tocker & Barron and Warren & Mahoney. They configured a simple and elegant solution aimed at meeting the needs of a provincial art gallery for much of the first half of this century.

Nelson’s public art gallery - the Suter Art Gallery Te Aratoi o Whakatu - is the latest such institution in New Zealand to re-open after an extensive re-build. Its history follows the pattern of so many public galleries here: founded by an individual or small group of enthusiasts at the end of the nineteenth century and initially a base for the local art society, then a decade or two after the Second World War beginning a physical expansion and passing of control to trained professionals, their more lively and outward-looking programmes an innovation from the often static displays featured previously. By the early twentyfirst century many of these institutions were ready for a second wave of development: either extensive remodelling or complete re-builds.

The Nelson gallery’s founder was Andrew Suter, born in the UK in 1830, and who came to the province with his wife Amelia in 1867 to be the city’s second Anglican bishop. He was an active amateur painter and art collector and founded what became the Nelson Art Society. Prior to his death in 1895 he expressed a wish to bequeath a public gallery to the city and province, so after his passing Amelia set the practical wheels in motion and just four years later a purpose-built hall designed by Wellington’s Frederick Jersey de Clere opened in Bridge Street adjacent to Queen’s Gardens. The Suter is this country’s third-oldest public art gallery, after Auckland’s and Dunedin’s.

Its topsy-like development over the following century mirrors that of most other New Zealand public galleries: more storage, toilets, staff offices, more exhibition space, more storage, a shop, a café, more storage -often off-site - better environmental conditions, more exhibition space, a theatre, and still more storage. To the point where these continual add-ons just didn’t add up. The inevitable question hovered around the choices of somehow rationalising the additions, removing them and starting again, or relocating to a completely new site. Nelson opted for the second.

The original Suter building had been much altered over the years and the key decision was made to retain and restore it. Also retained was the adjacent theatre built in 1979. Everything else went. With these two remaining givens, the constraints of the limited site and a need to respect the Queen’s Gardens environment were the challenge for the joint team of architects - Jerram Tocker & Barron and Warren & Mahoney. They configured a simple and elegant solution aimed at meeting the needs of a provincial art gallery for much of the first half of this century.

The old Suter was a hotchpotch of levels and styles, each exhibition space having little relationship with another, the overall atmosphere being rather dark and slightly oppressive, the impression given by the stained wooden beams and varnished wooden floors. By contrast, the new Suter’s four exhibition galleries are all on one level, are consciously connected by openings between them - beginning in the original 1899 gallery, the aligned openings forming a vista through to Queen’s Gardens - with the new building’s central ‘spine’ being a continuous, wide corridor. It runs alongside them, fulfilling the functions of foyer to both gallery and theatre, of reception, and of an entrance further down to the café and staff offices. The foyer has been named for the late, local artist and long-time Suter supporter Jane Evans.

This foyer/corridor features seven pou (pillars) acknowledging the six principal Nelson iwi, made by local artist Robin Slow of Te Whanau o Mohua to designs based on kowhaiwhai patterns supplied by them. The seventh pou acknowledges all other iwi of Aoteaoroa/New Zealand. The patterns have been lightly sand-blasted into the timber and cannily suggest either something fading or something else emerging.

The generous but not overly large four galleries and the other public spaces are well-lit by natural light (no doubt environmentally-filtered) and this along with lighter-coloured surfaces of floors, walls and ceilings has banished completely any sense of darkness and oppression. While the old Suter did acknowedge the adjacent Queen’s Gardens - almost exclusively by means of the 1979 café addition - the new Suter embraces them fully. The new café’s two outer walls are all glass, allowing extensive views over the adjacent ponds and through the native and exotic trees. (The café’s longest inner wall, also completely glassed, is contiguous with the central ‘spine’ - the ceiling of which is glassed as well - so the new Suter’s coherence is further reinforced by the café’s customers able to see into the building too.) The two galleries furthest away from the foyer have windows looking onto other parts of the Gardens, and the long central corridor space has tall, narrow windows (only about 200mm wide) affording further glimpses of the Gardens as you walk along. So, the overall impression is one of lightness and grace, and a seamless connectedness with the outside world.

Mitchell & Stout’s 2007 Tauranga Art Gallery has the virtue of a greater range of spaces: there is the large two-storied entrance space, a number of connected, medium-sized galleries spread over the two floors, as well as two quite small spaces: one on the ground floor and another on the first floor. The new Suter’s central corridor is presently also used as a space for selling books, ceramics and jewellry, and perhaps in future might be requisitioned for small exhibitions and artist projects that are catered for by Tauranga’s two small galleries. Of course, there is potential for dividing up the four main gallery spaces in Nelson and only time will tell just how flexible these galleries can be in responding to the ever-expanding requirements of, especially, contemporary art. But one extra smaller space would have been a useful addition though.

Incorporating historic spaces is always a risky undertaking: the Auckland Art Gallery’s restored McKelvie Gallery sits awkwardly within the new extension (and the former library wing, the present Grey Gallery, has never really worked as a coherent exhibition space), the colonial church at Masterton’s Aratoi resists integration, and at MTG in Napier the new and old buildings sit together uncomfortably like a couple in need of counselling. The new Suter’s architects, however, have made a surprisingly superb job of integrating the old with the new, possibly because of taking their cue from the proportions of the original building. There’s a nice touch too in that through the clerestory of the spinal corridor you can see the 1899 signage on the upper face of the first Suter at the triangular apex of its façade, a gesture of respect that resonates as a reminder of the bishop’s generosity and vision.

From Bridge Street the entrance is obvious and mostly accessible. As has become common, for easier access there are both shallow steps and a gradual ramp which segue successfully. At the lowest part of the ramp, however, a small tree with low branches has been planted, which performs unhelpfully as an obstacle to be dodged. Perhaps it will eventually grow tall enough to walk under, but at present it’s a rather discouraging object to encounter on the way in. Immediately inside the front entrance there is a list of donors on the wall. Immediately under it is a rack for coats which clutters what should be an open space. Not making provision in the plans for this function seems to have been a slight oversight (1).

As the café is at a level lower than the ground floor - making, nonetheless, a nice transition to the level of the Gardens (and, practically, you can easily see what tables might be available) - there’s a long, easy ramp down to the café’s counter from the central corridor space and parallel to it. But while customers are able to leave the café via the Gardens’ frontage, anyone wanting to return to the galleries must deal with the almost inevitable congestion at the counter, and this situation seems to be something of an oversight too. The Suter café has always been a popular venue, and the wooden rafters of the old one at least had the virtue of absorbing the noise of conversation. The new café is replete with hard surfaces, and consequently it’s much noiser. Perhaps an early artist project might initiate a series of woollen clouds suspended from the ceiling to counter this problem? Clouds are said to be a rarity in what’s claimed to be this country’s sunniest city, so the provision of some artificial ones might add easily to the Suter’s educational outreach.

But these are all very small quibbles in what is generally a very successful architectural achievement. The elegant, under-stated (almost self-effacing) new Suter puts displaying the art first and has thus avoided the pitfalls of fashionable ‘destination architecture’ where function is forced to follow the form: maybe good for marketers and as background for selfies, but not so good for the art. The new Suter’s structure denotes its various functions very clearly for visitors, and at all levels the building offers a welcoming and pleasurable experience. Bravo Nelson.

(1) On this writer’s second visit two days later the coat rack was nowhere to be seen.