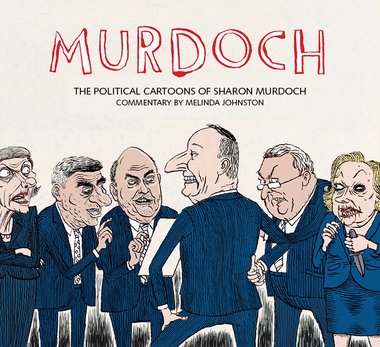 I guess the trick is putting yourself on the same level as the reader or leaving yourself out entirely, and not make assumptions about the audience. With Murdoch, the point is driven home gently and in one blow through judicious visual economy, without any lectures or homilies.

The best political cartoons are high art and one of the last authentic hold outs of allegory. Goya, Hogarth, Gillray, Steadman, Scarfe, David Low (a product of Canterbury School of Fine Arts in Christchurch), and Giles captured the imagination so because not only did they have the quick wit and/or spleen for it, but also the artistic chops to bring it to life without overcooking it. In New Zealand we hit a high point in the 1970s and 80s - Trace Hodgson being one of my favourites, Chris Slane another, and of course minimalist Peter Bromhead on a good day, but then they had grotesques like Muldoon and Douglas to play with.

These days, more often than not, we tend to be lumbered with a self-taught boys’ club who can draw okay, making cheap shots and picking fights; but someone who stands out in the recent crop - harkening back to a true artistry of the political caricature and one-punch visual political statement - is Sharon Murdoch, 2016 Canon Cartoonist of the Year and regular in the pages of the Sunday Star Times and The Press. She’s certainly no noob, being a contemporary of Hodgson (indeed they were once partners) and the Wellington Media Collective in the mid-1980s, by way of the hardscrabble world of underground comics - not a nice place to be a woman. Invercargill-born, too - Southland breeds ‘em tough. There’s a nice interview with her here.

There are so very few women in this business, probably more to do with the old boys network than any stereotypical bumf about women being more empathetic or temperamentally ill-suited to the cut and thrust (that sort of sexist nonsense is easily dispelled when one considers that New Zealand’s most experienced senior political journalist is the redoubtable and indefatigable Jane Clifton). Also, though a big deal isn’t made of it, Murdoch has Ngāi Tahu whakapapa as well, and I can’t think of any other Māori political cartoonists at all (not to say there aren’t any, just to acknowledge my ignorance) - a rara avis indeed. This is especially poignant when you consider the problematics of depicting Māori and Māori issues (intrinsic to New Zealand reality) by predominantly middle-class white people in a very necessary medium, that by its nature, stereotypes and caricatures.

Murdoch’s book, a self-titled collection, is at once striking for how thick it is - over 200 pages, which is a lot of material generated in a relatively short timeframe (roughly six years since first appearing in the Dominion Post). Despite the fact that political cartooning is more about deadlines than aesthetics, Murdoch has an amazing facility for keeping things fresh, with a line that reminds vaguely of early Warhol, Rowland Emett, and Ronald Searle, though in shorter and more awkward strokes, brittle and jerky - more like Quentin Blake, perhaps. It gives her pictures an anxious frisson that suggests to the reader that she is every bit perplexed and worried as they are.

Murdoch also draws on a formidable vocabulary of imagery, everything from classicism to Hokusai. Commemorative pieces, such as those recognising the passing of Nelson Mandela and Ranginui Walker, show that she is likewise competent with more naturalistic, chalk-board-style portraiture. Her virtuosity and versatility puts me in mind of Dylan Horrocks (though perhaps not regularly exercised to his degree of entanglement and mimicry) and although less furiously detailed than Anna Crichton, Murdoch has a similar sharp wit, thoroughly earthed in everyday human experience.

One of the really great things about Murdoch’s approach is that she clearly has an incredible sense of empathy and humanity, even when tackling some truly gruesome subjects like domestic violence and depicting some truly dreadful people. That humanity remains front and centre (despite the terrifying teeth) - there is a kindness and consciousness of human frailty that can be obscured in other socially conscious cartoonists. It often gets lost for example beneath the sanctimony, privilege, over-explaining and virtue signalling in the cartoons of Toby Morris, thus spoiling many an otherwise excellent commentary (particularly when the subject is racism, because there are so many available and articulate Māori voices to listen to), or Sarah Laing, who can make intensely powerful, earnest observations when she resists the siren call of the twee, but her tendency to treat the concerns and experiences of bourgeois urban-suburbia as some kind of universal is often alienating.

I guess the trick is putting yourself on the same level as the reader or leaving yourself out entirely, and not make assumptions about the audience. With Murdoch, the point is driven home gently and in one blow through judicious visual economy, without any lectures or homilies. Although it’s certainly not obvious, it perhaps helps that Murdoch has Ngāi Tahu ancestry: she actually has skin in the game. Unlike many cartoonists of political themes she never assumes that her audience is exactly like her - which in the political cartooning business usually defaults to white, middle-class and mostly male - and knows when to play the outrage and anger as concern en sourdine when appropriate.

I don’t feel there’s any pressing need to justify reviewing such a book on a website mainly dedicated to contemporary art - after all, Paul Little reviewed Ian Grant’s The Unauthorised Version: A Cartoon History of New Zealand (1980) for Art New Zealand (long overdue for an update and re-release). Murdoch’s book clearly sets itself up to be read in a high art context, with an accompanying text by art historian Melinda Johnston. Indeed, Murdoch used to design catalogues for Wellington City Gallery and the gallerist Peter McLeavey, and trained at the Wellington Polytechnic School of Design.

Murdoch’s cred as an artist, as much as a designer, is boilerplate solid. Johnston’s notes do a good job of teasing all of this out, putting it into context. I appreciate this - similar books all too often give their subject a superficial gloss, and here we have some thorough, but entirely accessible, academic rigour; a digestive snapshot of politics in the second decade of 21st century New Zealand, the Key years. Political cartooning exists in a kind of liminal zone between journalism, high art, and entertainment, and it’s always a pleasure to see the good stuff get the respect it deserves.