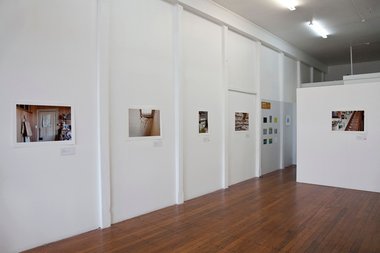 This project has set Matthews something akin to the geologist's task: a gentle peeling away of layers, not of soil and rock but of history and human occupation, and hers is from the ground up. The images depicting the distressed wallpaper record the layering time has revealed: the remaining islands of patterned paper, the scraps of scrim behind, the old newspaper lining under those, and finally the raw kauri boards of the wall itself.

Dunedin-based photographer Samantha Matthews has strong family ties to Fordell, a small settlement at the centre of a farming district about 15 km inland from Whanganui. These ties extend to a branch of the family who occupied a house called Lambhill adjacent to her parents’ farm, a building looming large in the landscape of her childhood experience and imagination.

Built in 1856 and rebuilt in 1881 by an Allison family it’s a typical, rambling two-storied, wooden colonial house with verandahs having French windows opening onto them, with the upstairs bedrooms built snugly into the roof and lit by dormer windows. In 1886 it was purchased by the photographer’s great-great-grandfather whose descendants occupied the house until 2001 - latterly a series of maiden aunts whose reluctance to update the interior (or even keep up with maintenance much) constitutes a remarkable defiance of modernity. For almost 130 years nothing much happened inside Lambhill materially - excepting a slow deterioration of the wallpaper through successive leaks and ravenous silverfish, surfaces worn, and the gradual accumulation of domestically “useful things” whose lifespan has long outlasted any practical use.

Lambhill‘s new owners are committed to preserving the house’s richly layered history, and this is the object of Matthews’ recent project, the ten large digital prints in the show registering “the present, past and future suspended in every room.” (1) In her 2014 show - Don’t quite belong (2) - at the same gallery Matthews revealed a sensitivity to interior spaces almost equal to Laurence Aberhart’s. It’s one thing to take a camera inside, but something else altogether to take the inside into the camera.

The interior images in the previous show were more conventional in that they conveyed a broad sense of the individual spaces. In this show she’s got up closer and more personal with regard to her subject matter, the compressed detail determining a more formal aspect to these photographs which is almost abstract. In several there is the use of a strong diagonal - and/or a series of smaller ones - to hold the image in place. For instance, Skylight, Lambhill, Corner, Upstairs Bedroom, Lambhill, and Dress, Lambhill (3) all deploy this strategy. There is a new assurance in these new photographs announcing a growing maturity of approach and realisation.

This formal advance in combination with such alertness to potent objects is an inevitable reminder of John Fields’ Signature series from the 1970s, forty-two individual vintage prints from which were recently shown at Photospace in Wellington. What Fields achieved so richly with his imperceptible tones of grey, Matthews has scored with a range of muted, natural colours that convey a similar sensibility. The visual noise of neon is for try-hards. Besides, both photographers occupy a space within the social documentary tradition, but it’s a social with a very small “s” - eschewing more politically active crusading for more humble, simple recording of a kind of portraiture where objects and environments speak for the absent subjects. At Lambhill there’s a strong sense of generations that no conventional group portrait could convey.

This project has set Matthews something akin to the geologist’s task: a gentle peeling away of layers, not of soil and rock but of history and human occupation, and hers is from the ground up. The images depicting the distressed wallpaper record the layering time has revealed: the remaining islands of patterned paper, the scraps of scrim behind, the old newspaper lining under those, and finally the raw kauri boards of the wall itself.

There’s another history too in what successive generations have affixed to those walls: family photographs and portraits, a hand-coloured aerial photograph of the property, stained prints of English castles, cathedrals and ruined abbeys, blue and white plates imprinted with similar subjects, bespeaking a connection with British picturesque culture now almost completely broken. Pinned-up postcards on the stairs point to a valuing of local cultural icons as well: Frank Denton’s early 1920s’ image of the Sarjeant Gallery’s façade and Laurence Aberhart’s 1986 image of the rear view.

These depicted objects throughout Lambhill‘s time-ravaged interior speak of daily human presence and of things that sustain it physically and spiritually. Matthews’ focused skill has been translating them into two dimensions, but without any loss of their suggestive power.

(1) From the artist’s statement forming an introduction to the exhibition.
(2) Matthews has had two solo shows at Space Gallery, the second having Fordell as its subject; not as some National Geographic-type survey but as a repository of childhood memories. The second show was covered by this writer on this site: Photography’s Spaces, 2 October 2014.
(3) This image partially depicts a white dress hung up on the wall. Other female photographers such as Janet Bayly and Dinah Bradley have mined the potential of such imagery. This particular photograph delivers a slight shock: the interior could date from anytime over the past century, yet protruding from the lightshade upper left is an LED bulb.