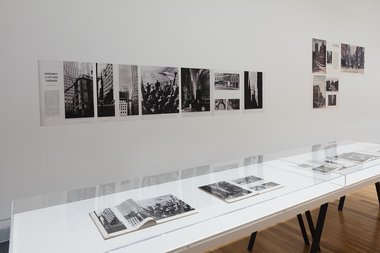 The “nature of photography” is largely what these shows are about (with a sub-text of design focusing on layout, which Lacey's short film pays homage to) and not only how the images have been made, but how they've been used and continue to be re-contextualised. Modernism's cult of originality is here both questioned and turned over by the disc and plough of the past three decades of critical reassessment. Photography's intimate relationship with copies and copying is also a connecting thread running throughout.

Unique in current exhibition practice here the Adam continues a programme best described by the word “dove-tailing”. Also distinctive is their tailoring of the shows to the building’s unique spaces, some of which are not naturally welcoming of art in an architectural scenario where function must often follow form. The Adam’s curators and designers, however, have turned this to their advantage, cannily assembling exhibitions of related themes suiting the spaces and amplifying the connections between both shows and spaces. Ultimately, the sum tends to be greater than its parts, and is certainly the case with the current exhibitions.

Unburdened by any need to be popular or answerable to the marketers and accountants of most other public galleries whose eyeing-up of numbers has a depressing effect on exhibition programmes, the Adam is perhaps freer to be more adventurous with regard to intelligent shows. While some institutions - such as the Auckland Art Gallery, the Gus Fisher, the Govett-Brewster, Wellington’s City Gallery and the Hocken - habitually mount exhibitions both visually rewarding and intellectually stimulating, none is anywhere as consistent as Victoria University’s Adam.

When it comes to photography, most galleries opt for the tired art historical model of the “important” artist who makes images looking more like art should look. Imaginatively, it’s called “art photography”. Notable examples are the recent Fiona Pardington A Beautiful Hesitation, the forthcoming AAG’s big Anne Shelton survey, and coming up on the radar the Dowse’s probably “major” Gavin Hipkins’ retrospective. These outings are likely to tell us more about art gallery culture, curator and artists’ careers than much about the nature of photography. This story was, by contrast, told at the recent Emanations show in New Plymouth.

That “nature of photography” is largely what these shows are about (with a sub-text of design focusing on layout, which Lacey’s short film pays homage to) and not only how the images have been made, but how they’ve been used and continue to be re-contextualised. Modernism’s cult of originality is here both questioned and turned over by the disc and plough of the past three decades of critical reassessment. Photography’s intimate relationship with copies and copying is also a connecting thread running throughout.

Walker Evans is the presiding genius of these shows, but it’s as a magazine photographer - mostly for Fortune in the 1930s and ‘40s - a hitherto overlooked aspect of his oeuvre (1). Bringing his Fortune work to the fore has been the initiative of Englishman David Campany, primarily another photographer rather than a curator in yet a further instance of enterprise originating within the medium itself. But at least such efforts are now being recognised and even supported more widely within the curatorial profession. The next step is its becoming the source of such enterprise itself. It’s a long time in coming….

Evans’s Fortune work is full of surprises: his acute eye for colour, his still-astonishingly perceptive, sharp and fresh layouts, his miraculous ability to convince the magazine’s editors - a journal largely a bible for mid-century materialism - and over a long period of time, to accept his ideas which often privileged manual work and covertly promoted the rights of workers.

In the lower long gallery downstairs actual copies of the magazines are displayed in vitrines with larger reproductions of the relevant pages displayed adjacently on the walls (2). What the images and their sequencing on the page suggest is a kind of Trojan Horse Modernism. America in the ‘30s and ‘40s - and perhaps more especially at the “business end” - was not especially welcoming of of the new modern art emanating from Europe (often seen as “unAmerican”). Artists such as Thomas Hart Benton, John Steuart Curry and Grant Wood were the homegrown favourites. But even though Evans’s subject matter was clearly realist, his simple direct forms, the massing of colour, the artful formalism of their expression were all based on principles of abstraction, principles later blossoming in the work of, among others, Pollock, Newman, Davis and Motherwell.

Modernism’s interest in so-called “primitive” art was part of a rejection of the often vapid realisms of 19th century European art and an attempt to return to (or at least recognise) the purity of human material expression - a further flirtation with the notion of the Noble Savage. In 1935 MoMA mounted a show African Negro Art which included a series of masks it had recently acquired and which the museum commissioned Evans to photograph. In a reprise of her seminal 1981 project After Walker Evans, in 2014 Sherrie Levine reproduced Evans’s work in a portfolio entitled African Masks After Walker Evans, and the images are displayed at the Adam in a line in the long upper gallery. Of course, this is a revival of her provocative query about the nature of originality and the validity of copying, but in terms of our - Western - relationship with “primitive art” a lot has happened since even 1981. For us, here, this includes the game-changing phenomenon of Te Maori. It’s too easy to shrug off Levine’s work as “the same”: as they say, it takes two to tango, and the nature of the viewers’ receptivity is at least half of the dynamic. What was made of Evans’s images by an American audience in 1935 could be (or should be, if “progress” means anything) light-years away from the response in Aotearoa in 2016 to Levine’s still-probing and enigmatic mask images. It’s perhaps odd that this is Levine’s first show in New Zealand, but then again, perhaps it’s been worth the wait given the illuminating context offered by these Adam shows.

Halfway down the stairs separating the Gallery’s upper and lower levels there’s an ample landing sometimes functioning as a foyer to the more internal Kirk Gallery. Here some of the Evans’ magazine work for The Architectural Review is shown alongside some of Patrick Pound’s, the bulk of which is displayed in the adjacent Kirk Gallery. This mix’n’match segue is a useful device for drawing parallels and knitting the separate contributions together. As Pound has admitted, his collecting of popular material such as postcards to support his work has become his work, so that what was his archive is now his activity.

This recycling has become a familiar Postmodern trope, and after two or three decades of it there’s a growing sense that the potential it offered may have been largely mined. That is, in terms of delivering fresh insights into the nature of imagery and our relationship to it. In terms of the ever-expanding PBRF phenomenon, however, it remains a mine of wearyingly inexhaustible potential. Assemble a range of readymades, re-arrange them in artfully formal ways, attach labels with claims impossible to verify - or even make much sense of - find a respectable gallery and, hey presto, scrabble becomes literature. As Freud may have said “Sometimes copying is just copying.” The artist as collector and archivist may induce admiration for qualities of enterprise, focus and even obsession, but whether such activities at even a highly sophisticated level ultimately tick much more than a bunch of boxes on an assessment sheet is for history to decide. There is no doubt, however, that currently it’s a hot topic (3).

Back downstairs, the window area to the left of the Adam’s entry is most often used as an open exhibition space, an inducement and invitation to come in. This time it’s been closed off to show Sonya Lacey’s short film Newspaper for Vignelli. Massimo Vignelli (1931-2014) was a significant Modernist graphic designer who in 1978 conceived of a newspaper called European Journal which never got designed beyond the first page and consequently the template neither completed nor resulting in publication. As a homage to Vignelli’s vision Lacey has completed the project, but not as something to be handled and read. Instead, the flexible and fragile object has been liberated in the open air and filmed as the wind blows it about. The label has it thus: “Casting this design into a turbulent environment is her meditation on aesthetic hope, a consideration of the fate of ‘good’ design in a world of commercial imperatives.”

Seeing this film, perhaps inevitably, is a reminder of the short scene in 1999’s movie American Beauty where a common plastic bag is tossed about similarly in an autumnal breeze. There’s an interaction between the lighter bag and the gathered leaves absent from Vignelli - the grass there remains stolid - and with the latter there’s a lurking suspicion a device such as a leaf-blower may have been involved, as the action is more controlled than in Beauty. Does the worthiness of Vignelli compensate for the greater anarchy and poetry of Beauty? Again, another judgement for time and history. It’s a good guess, though, that Walker Evans’s famous fastidiousness may have been offended by both.

(1) Examining a photographer’s magazine work - generally assumed to be of lower status - could be a trend, perhaps begun by Aperture as long ago as 1984 with their substantial book about Arbus’s magazine work. Launched by a photographic publisher twelve years after Arbus’s sensational posthumous exhibition at MoMA - which featured none of her magazine work - tells its own story about why and how images get looked at. The final sentence of the Foreword is telling: “This book is a roughly chronological record of what she did for magazines. It is about work as a process rather than a series of isolated achievements and about the evolution of a distinctive photographic style that grew out of ingenuity, eclecticism, and the simple necessity of getting the job done.”

(2) There has been some disquiet expressed about the scale and technical quality of these larger reproductions. Maybe some point is being made by the nature of the discrepancy? Maybe the technology involved’s just not up to approaching the quality of the original Fortune illustrations (if that was ever a consideration). And the very thin material nature of the images means the textured walls become part of the experience of viewing them, which may or may not be a good thing. Apart from all of this, the main reason why these larger reproductions are in place seems largely decorative: something to have on the walls.

(3) The Adam’s very next show, featuring Ruth Buchanan’s work, appears on the basis of the pre-publicity to pay homage to the phenomenon.