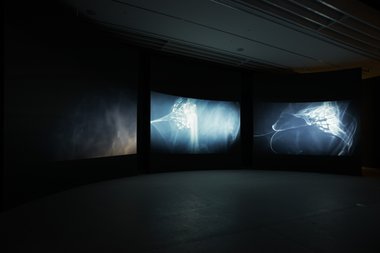 Looking at the four exhibitions, there is an evenness of quality, with no one talent hovering conspicuously above the rest. If anything most of the work seems in this presentation overcooked, too complicated and too striving. Most of the earlier versions of these chosen shows were simpler as installations and more emotionally affecting.

Everybody has an opinion on this event, not only on which artists should have won on certain years, but the nature of the stipulations embedded in the gig itself. In fact - with the latter - more so. It truly exasperates; and AAG’s jury selection (as a narrow coterie) often causes more chagrin than the decisions of the various appointed overseas judges.

This year, the artist line up seems genuinely national and not Auckland (K‘ Rd) local; not because three of the four artists happen to have overt Maori content that presides over ‘Internationalist’ structure, but because one of the artists resides in Christchurch. And the show is now no longer preoccupied with replicating earlier exhibitions in a new architectural context, but instead, gives the artists more creative control over their submissions. On one level it is much more (obviously) sensible now - but on another, reworking projects does have the risk of being overwrought, of over layering - of creating turgidity.

To get a handle on these four works the catalogue is extremely useful. It is larger now, with excellent writing that is lucid and complex. It includes a statement by the jurors for each artist’s original exhibition, a discussion of the work by Natasha Conland in her role as the institution’s contemporary art curator, and a set of pithy interviews with the contributors that makes very good reading. (And still cheap at $15.)

Looking at the four exhibitions, there is an evenness of quality, with no one talent hovering conspicuously above the rest. If anything (for those reasons I’ve mentioned) most of the work seems in this presentation overcooked, too complicated and too striving. Most of the earlier versions of these chosen shows were simpler as installations and more emotionally affecting.

The Lisa Reihana and Joyce Campbell installations are good examples. Since she presented Flightdream in the Sydney Biennale Campbell has included in her soundtrack the read-aloud Mark von Schlegell short story that inspired it. And it is extremely hard to decipher from the cacophonous but gorgeous, swirling, clanging Kolovos guitar - no matter where you stand. I think her attempt to add ‘meaning’ to the work has destroyed it. And the oozing, swelling, watery images are just as extraordinary on one screen as on three.

With Reihana’s beautifully shot video installation (Tai Whetuki - House of Death Redux) with its flickering light on water (and through foliage), she intends to exploit complexity, using two screens where dark images bounce back forth horizontally, and are vertically inverted in the polished floor. Plus the Tupaia narrative she references (that appeared in in Pursuit of Venus [infected]) is deliberately chopped up. Snippets of a dying warrior, The Chief Mourner and Hine-nui-te-pō (Goddess of Night and Death) are intermingled and overlapped. Again, any linear narrative is hard to plot.

Shannon Te Ao‘s video, Two Shoots that Stretch Out is augmented by I Stretch Everything in the End, an installation of buckets of pot plants, cacti and carefully cultivated weeds that was residue from an earlier performance. These scruffy botanical specimens are now presented as an extension of the mammals and domestic birds in the video that Te Ao reads a moving waiata to, a poem written by a wife to her husband who has left her for another woman. The plants are in a separate room from the projected videos, but within ‘earshot’.

With domestic pets the tone and volume of a human voice alone seems to communicate something, and it has often been suggested that plants benefit from soothing music. With Te Ao, the proximity of the plants to his recorded voice may be an issue in terms of the efficacy of his added elements.

With Nathan Pohio‘s contribution - Raise the anchor, unfurl the sails, set course to the centre of an ever setting sun! - there is a similar zone of contention, the distance between the depicted eleven Kaiapoi chiefs escorting the Plunkets in the massive double-sided lightbox installed in front of Auckland Art Gallery Toi o Tamaki, and the solitary Lindauer oil portrait in the clocktower room on Level One, of their relative Hakopa Te Ata o Tu.

Comparing the two: on the one hand we have a man reading a poem to a group of animals and an assortment of over a hundred plants, as an experiment in communication and investigating sentience, and on the other, a family bond is declared (not postulated) between the colonised subjects of a painted portrait and an enlarged newspaper photograph.

Are there parallels? Should one measure distances? This year’s finalists all provide exciting and provocative projects, with many cross-connections. While not as radical as last time with Leach, Denny, Thompson and ‘Uhila, the 2016 works instead embrace the institutional space and ocular/aural sensuality, and throw up some interesting questions. This cluster of shows (and its informative catalogue) offers a lot. We await Doryun Chong’s visit with great interest, for picking a winner will not be easy.

Shannon Te Ao is the judge's winner. A popular choice I think, with this artist building up an impressive body ...

Doryun Chong will announce his winner tomorrow. My personal punt is Pohio, not because I happen to come from Christchurch, ...

My personal punt is Pohio, not because I happen to come from Christchurch, but because of the strategic positioning of his large double-sided image in relation to the Lindauer show and the Hakopa Te Ata o Tu portrait. A clever move.

Shannon Te Ao is the judge's winner. A popular choice I think, with this artist building up an impressive body of much loved videos. Congratulations Shannon.