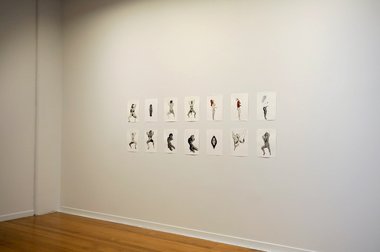 This is territory exclusively limited to the domain of woman artists and for obvious reasons. It would be a brave or perhaps foolhardly male artist who attempted the same. Too much potential for misreading. Too much politically at stake.

The nude, the female that is, has for nearly four decades become a contested site. A plethora of critiques and a certain careful tip-toeing around the subject have been evident in the annals of art history in recent years.

No one other than Fiona Pardington, for example, could have taken black and white discarded negatives of a nude pin-up girl from a 1950’s mag and blown them up into gigantic billboards and been applauded. It’s a place where male artists fear to tread. Too much baggage.

Only someone like Megan Hansen-Knarhoi could have taken images straight out of contemporary pornographic magazines and literally stitched them up into cross formations, entitled Copulation Cross and got away with it. Or Abigail Jensen, who drew on paper four stylized vulva shapes with a text that read “Just fuck it”, attended by a crowd of tally marks.

This is territory exclusively limited to the domain of woman artists and for obvious reasons. It would be a brave or perhaps foolhardly male artist who attempted the same. Too much potential for misreading. Too much politically at stake.

Lonnie Hutchinson has revisited the female nude, currently showing work at Ramp Gallery with accompanying exhibition essay by Linda Tyler. It is not just another attempt to confront the issue of the unclothed female in art, but also a way of attending to the shocking mistreatment of women at appalling levels of human degradation. In doing so, Hutchinson has confined herself to ink and acrylic on paper, small images that focus on simple linear configurations.

These are presented, for the main, in explicit poses, some of which take their reference point from pornographic imagery and thereby come with obvious political overtones.

The first thing to say is that they are hung in two distinct groups on opposing gallery walls; this itself acts as an interesting conversational counterpoint, a division which follows both slight stylistic differences and also difference in the date of composition.

What is also apparent here is a conflation between male and female, something that combines elements from each gender. Boundaries in the process are crossed. This is also stated literally in one of the images of a bisexual figure possessing both male and female genitalia.

There is also more than a hint of ethnic presence in some of these women, an almost aboriginal reference seen especially in one of the darker figures enveloped in what amounts to white striped markings. It calls to mind Max Ernst’s The Beautiful Gardener, painted in the early 1920s and later exhibited by Hitler in the Degenerate Art exhibition next to a text that read, “An insult to German womanhood”. Hutchinson’s figure is therefore full of significant echoes and art historical allusions citing political historical events with their fascist pogroms in relation to women.

On the opposite wall are nudes again from an earlier series, Midnight en Mass (2003-2004). These figures are more ‘conventionally’ portrayed in poses that recall more directly the pornographic genre. Completely reduced to sexual objects, they are also noticeably slimmer than their counterparts across on the opposite wall. An interesting dialectic thus ensues between the two suites, almost a kind of disputation.

Hutchinson’s style for these works involves deft and simple linear brushstrokes, recalling the work of Matisse, and raising pertinent art historical questions about the male portrayal of the nude with its touch of Orientalism and all its implications. The male gaze and the female gaze thus arm wrestle in this second suite of works as the artist takes on, as others before her like Vanessa Beecroft, Elke Krystuick, Sarah Lucas and Marlene Dumas, the issue of presenting the female nude in the twenty-first century with a critical edge.

Some of these drawings more explicitly depict, in their anguished poses, the story of sexual exploitation down this end of the world, quoting the unspeakable horrors that were perpetrated against Polynesian women who were kept as sex slaves in the holds of pearl trading ships in the nineteenth century.

Hutchinson gives these grossly abused women a poignant voice. The title, Light My Fire, comes with an ironic double edge. The song Jim Morrison penned has obvious sexual connotations, but the fire Hutchinson lights is one of blazing moral indignation.

I wondered whether these fascinating images might be related, if only on a subterranean, perhaps subconscious level, to the astonishing ...

I wondered whether these fascinating images might be related, if only on a subterranean, perhaps subconscious level, to the astonishing body art of the now virtually extinct Selk'nam people from Tierra del Fuego. Cf: http://4.bp.blogspot.com/-1LH7HErvwt4/UqznasZVByI/AAAAAAAAHvI/x3YX-PTaM70/s1600/real-final-selknam.jpg