Contained, But Almost Spilling Over 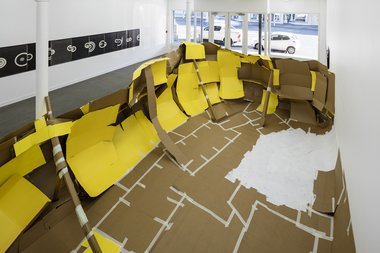 The works of these three artists fit together well with their breaking down of (but maintaining) processual method: an evolving sculptural installation; moving lines on three screens; a gray row of sliced rings - bleached but minus segments - matching at the cut to form asymmetrical pairings.

This intriguing show looks at the processes of thinking around the step by step manipulation of materials, so that time is not covered overor ignored, but celebrated. The end result is not a final stage separated from the steps arriving there, but rather all the sequential increments that gradually lead to it - reflexive moments that declare themselves.

Daniel von Sturmer‘s three videos subtly mock the seriousness of mark making as a final statement. Poured white glossy paint dribbling down over a black field gradually forms a peaked roof while the viewer studies the shadows and reflections at the glistening edges trying to grasp the spatial relations between the different implied (unseen) dark planes that hold the running flows in place.

Another has an apparently huge rolling drum of paper on which the artist places a line of liquid ink from the nib of a handheld pen. The artist removes the pen when the start of the wobbly undulating line returns on the other far edge of the paper. A third has a rotating black disc where a hand holding white chalk allows a circle to be completed. And then the process is repeated, erasing, using a very wet duster held against the turning wheel.

The Gavin Hipkins‘ frieze of exposed black light-sensitive paper show where flat rings and ball bearings were placed on the paper surface which was then exposed to the light. The white areas are where it didn’t reach. With the ball bearings, the flash of light bouncing off their metal sides got mysteriously picked up. As that part of the ball was in the shadow, the reflection must have ricocheted off the sheen of the paper below it, up to the sphere and back again. The sheets of dark gray and darker gray tend to alternate, with the rings being truncated at the vertical paper edges, and butting together at the joins.

Richard Maloy‘s yellow painted sprawling cardboard installation uses a system of buttresses and armatures to bear its own weight, even when the improvised taped-up hollow sculpture nuzzles high up against the elegant Starkwhite columns. Dismantled cartons with facetted sides make Maloy’s dish-like boat form deliciously expressive; it’s strangely regular and rhythmical, and he continues to work on it. Here the cardboard still refers to its origins. Its colour might have changed, and it might be still growing, and continuous, not discrete - but that doesn’t disguise its packaging source.

The works of these three artists fit together well with their breaking down of (but maintaining) processual method: an evolving sculptural installation; moving lines of liquid materials on three screens; a gray row of sliced rings - bleached but minus segments - matching at the cut to form asymmetrical pairings. Each procedual system is under control, but with a sense nevertheless of it almost unravelling; contained but almost spilling over.