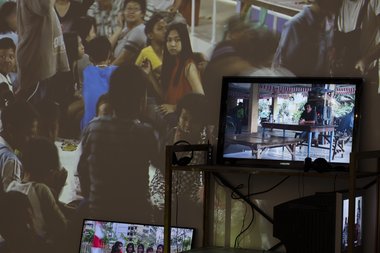 It's a complicated project that focuses on a general subject (the social consequences that sometimes accompany modernist apartment blocks) that has been regularly scrutinised intensively since the late forties, but this time looking more closely at economic and sheltering specifics, and for the inhabitants: searching for strategies of survival.

Dieneke Jansen
Dwelling on the Stoep

This show by Dieneke Jansen elaborates further on the housing theme she has explored energetically in earlier presentations (such as the selling of state houses one she presented via Te Tuhi), amplifying a social crisis that is very much on Aucklanders’ minds at the moment. Her exhibition has obvious connections with the community project developed by Sakiko Sugawa, also at St Paul St, and amplifies other threads about urban resources that came to the fore with the big Christchurch earthquake and the attendant success of groups like Gap Filler, Life in Vacant Spaces, and XCHC.

Dwelling on the Stoep has three sections, globally linked to three cities where in certain suburbs, Jansen has participated with discussions with the residents of large rented apartment blocks. Video material and photos (on real estate signage board) from Jakarta is presented in Gallery One, one installation of 9 videos being exhibited previously in last year’s Jakarta Biennale; videos from Amsterdam are in Gallery Two; and photographic banners from Auckland are in Front Box - along with streamed online broadcasts from Radio NFA (No Fixed Abode): a station focussed on lobbying for the homeless.

Extensive published material (academic dissertations, newspaper articles and timelines) - looking at all three housing communities and the issues confronting residents (Cluster A, Marunda; 4 blocks in Bijlmermeer; Housing NZ’s Greys Ave Tāmaki Makaurau) - is presented in a Dwelling on the Stoep supplement, available for free in the foyer. The title refers to the ground floor entranceways of the Dutch housing blocks.

There is a lot of recorded conversation and story-telling to look at here, and much contextual background reading, but most people I imagine will stroll around and casually read the typed out translations onscreen, zeroing in on various speakers according to whim - when some aspect visually or conceptually hooks them.

Jansen’s bank of photographs of Jakarta’s apartment complexes - mounted on corrugated plastic, occasionally tilted sideways or hung on walls - leans against the long wall as if the shell of a lean-to structure in its own right, and is a strikingly effective contribution. The sideways panels imply the possibility of change.

Of the various video discussions positioned about the two galleries, I found the Marunda video Jokowi’s Hydroponic & Nassarol’s Informal Gardens (2015) the most absorbing, with two resident farmers talking about how they use the irrigation systems and greenhouse donated by an ex-Jakarta governor, the type of fruit and vege produce they develop - and its markets. The video is positioned next to a mounted photograph on silk that slyly mimics the neighbouring plasma screen. It is not obvious it is not a screen.

The published supplement is dense with varied sociological and historical information, and with the three sections on different coloured paper, easy to negotiate with the gallery exhibits as points of reference. When you look at the range of authors, the amount of informed writing found about the three different housing estates is quite surprising.

St Paul St Gallery tends to favour video as the art method of choice and often there is a predictable sameness about the exhibition designs, And this one fits that house style. However the publication, being free and hard to ignore, brings nuance to the exhibition if you tie it in with the visual display.

As you’d expect, the main themes apparent throughout the show are the vulnerability of low income tenants to eviction, their exploitation in general, difficulties in finding opportunities for earning sufficient income, attempts to avoid a downward slide in lifestyle, and efforts to rustle up varieties of community support from neighbours via sharing of resources and discussion of mutual anxieties. It’s a complicated project that focuses on a general subject (the social consequences that sometimes accompany modernist apartment blocks) that has been regularly scrutinised intensively since the late forties, but this time looking more closely at economic and sheltering specifics, and for the inhabitants: searching for strategies of survival.