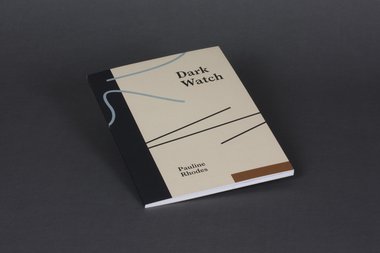 Rather than look at the contents of this book in order of sequential appearance, let's flip it over and start from the back? Why? Because the content of the writing logically encourages that sort of analysis. I think it works better that way to help us see the overall conceptual structure.

I picked up this publication when visiting Kelvin Soh and Anita Totha’s bookshop at the Auckland Art Fair, and when I got home I was delighted I did. It is a thin elegant book with nice heavy paper, that came out early this year after Pauline Rhodes‘s exhibition at AUT. Snappy and elegant with Ella Sutherland‘s distinctive cover design, its collection of essays make it an excellent companion to Christina Barton‘s own more substantial 2002 book (Ground/Work: The Art of Pauline Rhodes) with its longer essays by Barton, Geoff Park and Sarah Treadwell - and superb chronological account.

Rather than look at the contents of this book in order of sequential appearance, let’s flip it over and start from the back? Why? Because the content of the writing logically encourages that sort of analysis. I think it works better that way to help us see the overall conceptual structure.

The last article, Rebecca Boswell‘s contribution, discusses Cones of Possibilities and Impossibilities, a Physics Room exhibition held by Rhodes in June 2014, a densely positioned work in a comparatively dark and compressed space - unlike the St Paul St Gallery show where the bending steel rods with black or red rag tips (and other assorted elements) visually led the visitor towards the large windows in the corner, and the city streets beyond. Using a terminology that Rhodes herself has invented and been using for many years, and which Barton has discussed, the Christchurch presentation represented an intensum and the Auckland one, an extensum. While indoors, both these (spatial) element stabilisers and vector system (with upward pointing rods) reference the landscape Rhodes is fond of - and which she regularly documents to showcase her ultra-temporary, outdoor, sculptural interventions.

Looking at the natural’ and ‘cultural’ materials found in Rhodes’s indoor and outdoor installations Boswell considers part of Elizabeth Grosz‘s book Time Travels: Feminism, Nature, Power (pp 44-47) that dissolves the distinction between the two by attacking the view that nature is timeless and unchangeable. That approach is obviously mistaken now, with conspicuous recent developments in global climate shifts, and work done like that of Peter and Rosemary Grant on the evolution of Galapagos finches. The changes in the earth’s layers, and the behaviour of its inhabitants, occur far more rapidly than previously realised. And that (as Boswell points out) the cones of Rhodes’s Physics Room exhibition title apply to both nature and culture - referring not only to geological volcanic cones but to orange redirecting road works cones too.

Ash Kilmartin‘s writing does not directly address Rhodes’s practice, and although not an ‘art historical’ analysis, is a valuable contribution to the publication. Her text vividly describes the actions of a swimmer in the sea; the physicality (and changing directions) of her movements between the rising edge of an island beach and another offshore island. There seems to be an implied parallel between her muscular limb co-ordination, her acutely visceral sensitivities to the textures of water, air, light and sand, and Rhodes’ own daily activity of long runs through the Banks Peninsula landscape and coastal environs; as well as the spatial theme of Rhodes’ extensum installations that - via their positioning - allude to a body in motion that sequentially interacts with (and is empathetically cognisant of) the sculptural natural forms it comes across. On a temporal level the text has parallels with the previously mentioned outdoor sculptures Rhodes makes outside from recycled components, to be dismantled immediately after documentation.

Charlotte Huddleston‘s essay looks at the community ethics and ecological ideas of Ursula Le Guin, Donna Haraway and Jane Bennett to break down the above distinctions further and to wrap around and expand on Rhodes’ working ethos - where she references different time scales via apt choices of materials. She looks not so much at the intensum /extensum (spatial) separation, but at the outdoor photoshoot versus indoor installation (temporal) divide. These poles Rhodes oscillates between and at times contradicts (as pointed out by Barton), constantly changing much like the oxidization (decaying) process of the rust that features prominently in many of her installations.

Making parallels, Huddleston emphasises Le Guin’s advocacy of humanity having a caring, compassionate, and empathetic relationship with the world, avoiding an exploitative one. Haraway has a similar aim, asking for a relabeling of the current human dominant era of the earth’s history, rejecting the Anthropocene (Age of Man) term, or even Capitalocene (Age of Capital) for Chthulucene (what she calls ‘an obligate symbiosis’), where humans see themselves as part of the world, not outside of it. Huddleston then closes by taking Bennett’s notion of ‘vibrant matter’ to reject the idea of things such as rocks as being inert - that they and humans are all part of the same continuum.

Dark Matter is a modest but indisputably handy publication, that is nicely designed to look at and read. Strangely a lot of contemporary art catalogues and brochures aren’t (being flimsy and floppy, with the point size too small), but this one is a great addition to any library.