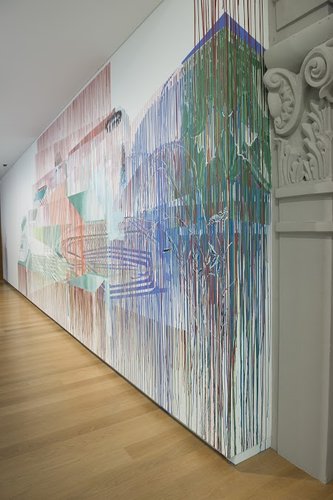 Positioned deliberately on a wall that most artists would consider ‘dead space' - because a nearby staircase prevents viewers from standing back - Gumucio calculatedly frustrates the gallery visitor by incorporating collage and laws of perspective that hint at the anamorphic with a ‘resolvable' viewing position. Stacked terracelike forms dominate his long rectangular wall, the edges delineated by dense cascading dribbles of paint that have also been masked.

One of the more unusual contributions to Space to Dream is a mural painted directly onto the walls of Auckland Art Gallery by Chilean artist Ignacio Gumucio. Positioned deliberately on a wall that most artists would consider ‘dead space’ - because a nearby staircase prevents viewers from standing back - Gumucio calculatedly frustrates the gallery visitor by incorporating collage and laws of perspective that hint at the anamorphic with a ‘resolvable’ viewing position. Stacked terracelike forms dominate his long rectangular wall, the edges delineated by dense cascading dribbles of paint that have also been masked. The staircase’s safety banister seems to pinion you to the side of the strangely tilted image as you strain to decipher the role of the spliced-in collaged figures within Gumucio’s complex, overlaid pictorial space.

Some intriguing copper sculptures in this show also reference limitation, but economic, not spatial or bodily. Patrick Hamilton‘s work is about Chile’s wealth being hugely dependent on copper-mining. He shows two sorts of sculpture that critique Chile’s lack of earning flexibility: one references those tubular devices that can be locked onto a steering wheel so it cannot be turned; the other the spikes used by police to set up roadblocks, that puncture the tyres of any speeding car that crosses them - and which look like razor-sharp anti-trespassing barriers placed on top of high fences - but now here have been transformed into interlocking diamonds.

The clothed and adorned masked mannequin by Bernardo Oyarzún is related in that it is a fierce attack on the consumerist ethos, a mock shopping tourist draped with bags from famous brands, multiple smart-phone-cameras, and various indigenous souvenirs. It is based on Ekeko, the god of fertility and abundance revered by the Aymara, an indigenous nation based in the Andes that lives in Bolivia, Peru and Chile. Oyarzún’s sarcasm is aimed at neo-liberalism, at both entrepreneurial seller and consumer, and particularly at the pressures placed on indigenous communities to vigorously compete in the marketplace.

The three gorgeous photographs by Demian Schopf also reference Bolivian culture, but in this case through an architectural backdrop of self-taught Baroque/ Andean architect Freddy Mamani, as well as worn folkloric costumes and masks. These are wildly eclectic from Chinese dragons to pre-Inca motifs. The three dancers, wearing costumes for the Carnival of Oruro and The Festival of Lord Jesus of Great Power in La Paz, are amazingly varied in the inventiveness and multiple referencing of their garments.

Mamani‘s architecture, with the dancers, is indeed an obvious Space to Dream but with this show sometimes the language provides its own oneiric images. Confrontational activist and poet, Paulo Bruscky, provides a large bannerlike text that sweeps across the wall. Its English translation reads: Poem without a meter. Pure architecture, the poem gauges the parallel between tracks and the height of airplanes.

The above poem really pushes the imagination, but a Lenora de Barros piece found on the other side of the gallery, residue from a performance where the many hammered in nails are just as important as the eight letters they support and act as a foil for, plays with the materials and support used - their physically connected processes.

Juan Castillo‘s two channel video on the other hand has the woman on the right (with closed eyes) imagining images from the texts that hover over the screen. On the left the burning sign that states ‘I give you back your image’ will - through its destruction - reveal the flat desolation and clear sky of the Atacama Desert. Language disintegrates to be replaced by the hitherto hidden landscape. One set of signs replaces another.

In Joaquin Sanchez’s video one letter dissolves to change the meaning of the text. A sentence of ice placed in the sea off the Chilean coast by Bolivian immigrants, comments on a dispute between the two countries over access to the Pacific Ocean. We see it transmute from ‘No se nadar’ (‘I don’t know how to swim’) to ‘No se nada’ (‘I don’t know anything’).

To round off this discussion of words and imagery, in a more traditional manner the 101 year old Chilean poet, Nicanor Parra, uses language that is toing-and-froing in an internal dialogue (often with the blackest of humour) to scorn fixity and emotional constancy.

The fact is that I feel bad
The same pain in my stomach
And the constant dizzy feeling.

What do you mean bad: I feel great!
I’ve never felt better in my life!
I only wish I could feel terrible.

Look carefully and you will see
That I can’t stop laughing.

This extremely complex exhibition, one that is rich in many sorts of content and mood, will repay many visits. It’s the most important international show to come to Auckland for many years, for Beatriz Bustos Oyanedel and Zara Stanhope have done a wonderful job in their very considered selection. Not only is it enriching for the dilligent via the space of Auckland Art Gallery, but it brings dividends through the resources of the Public Library as well.

(1) Not presented in the actual exhibition, but quoted by Edith Grossman in her book chapter here.

The great Chilean poet Nicanor Parra, who was part of this survey, died recently. Here are a couple of obits. ...

Here is a wonderful link to Violeta Parra (also in the show with Lps in a vitrine), singing 'Gracias a ...

Here is a wonderful link to Violeta Parra (also in the show with Lps in a vitrine), singing 'Gracias a la Vida.'
https://www.youtube.com/watch?v=UW3IgDs-NnA

The great Chilean poet Nicanor Parra, who was part of this survey, died recently. Here are a couple of obits.
http://www.bbc.com/news/world-latin-america-42789255
https://www.nytimes.com/2018/01/23/obituaries/nicanor-parra-chile-poet-dead.html?&moduleDetail=section-news-&action=click&contentCollection=Obituaries&region=Footer&module=
MoreInSection&version=WhatsNext&contentID=WhatsNext&pgtype=article