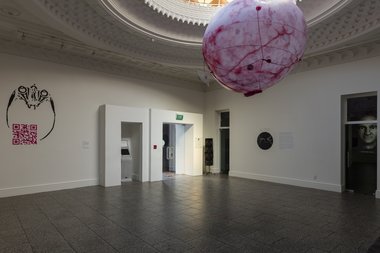 Four decades ago this sort of show would be revelatory, but now it looks anti-climactic, flat and dated. Much of it is vaguely interesting but not wildly so. It is somewhat clinical, yet some works like Stelarc's and Haines', are memorable because of their humour and presence, and Lawler-Dormer's because of the bizarre intensity and detail.

Examining the blurring of boundaries between humanness and machinery or digitally-implemented robotic processes, and utilising projections or moving imagery on monitors, this international group show looks at brain research, facial expression, artificial intelligence and computer science when embraced by artists. Organised by Deborah Lawler-Dormer as part of her doctorate research, Alter: Between Human and Non-human is presented within the ornate decor of the Gus Fisher with an array of plasma screens and headphones, two large projections (one with an interactive keyboard) and two sculptural forms.

Agatha Haines‘ Drones with Desires is a helium-filled weather balloon that looks like a giant eyeball ominously hovering in the Gus Fisher foyer. Covered with sensors and strange whirling finlike sails that flap about, it fascinates as if a disembodied - but apparently endlessly cogitating - brain. Three videos of scans and coloured neural maps of the artist’s own grey matter are positioned nearby.

Nina Sellars‘ wall image presents a large Q-code for those with the right smart-phone and app, presenting online scans of her brain when she was undergoing treatment for a tumour and temporary blindness. As I didn’t have the equipment, I never engaged with the work.

Legendary performance artist, Stelarc, presents a large projected prosthetic head that attempts to engage with visitors by answering typed-in questions by verbally replying. About two thirds of ‘his’ spoken replies (for a ‘robot’) make good sense or are not exasperatingly vague. Because its face often has an enigmatic smile, a half-smirk that occasionally - when tightened lips are then pulled back from the teeth - looks aggressive, I asked, “Do you feel aggressive?” and ‘he’ replied, “As a prosthetic head the body lacks any emotions.” When I also asked,” Do you like to dance?” ‘he’ said, “It is very hard without a body.”

Jane Prophet‘s projections on a 3D printed sculpture, look at the Dutch tradition of memento mori with a head that is half skull, half self-portrait, but with geometric and colourful neural overlays. The video on the wall seems to serve as an art historical contextualisation for the sculpture rather than an artwork in its own right, and doesn’t seem necessary for a regular art audience, but maybe it is pitched towards the ‘science crowd’ instead. The glowing half skull/half head, transforming through permutations in the dark, is sufficiently compelling on its own.

Deborah Lawler-Dormer’s collaboration with Mark Sagar - a scientist associated with the Laboratory for Animate Technologies where he works on an ‘Auckland Face Simulator’ - presents Leah, a projected version of Lawler-Dormer’s own head and face, myopically watching you (approximately) as you move around the small gallery where it is installed. Not much else is happening, so her project seems underwhelming and very low key, especially when compared to Sagar’s own gallery talk where with another version he demonstrated the vast range of expressions achievable - an orchestration of mood and communicative immediacy - or Stelarc’s vibrant and charismatic contribution across the foyer.

Elena Knox‘s Comfortable and Alive (2014), looks at and attempts the process of hypnotism, and is presented in six languages…”See the profusion of red blooming flowers… If I touch you in any way do not be alarmed, as every fibre continues to melt and to melt and to melt and drop down deeper… When I count to five…” The silky voiced, steely eyed ‘Actroid’ (on a split screen; one half inverted) asks for your trust as you acquiesce to her authority and dominance.

Four decades ago this sort of show would be revelatory, but now it looks anti-climactic, flat and dated. Much of it is vaguely interesting but not wildly so. It is somewhat clinical, yet some works like Stelarc’s and Haines’, are memorable because of their humour and presence, and Lawler-Dormer’s because of the bizarre intensity and detail. Overall though, the informative and at times entertaining gallery lectures were more successful than the exhibition.

I agree, Lawler-Dormer. Although several of the pieces appear straight-forward, I think they command a longer attention span and a ...

Lawler-Dormer’s rather magisterial and slightly condescending rhetorical question begins by mentioning critical rigour and then continues with a series of ...

Is it not time that Aotearoa has contemporary media shows reviewed with critical rigour, respect for complex media artistic practice and scholarship and a political awareness of the nuanced and embedded relationships that we have today with technology? This show contained works by practitioners, largely from the last five years, who are knowingly and strategically engaging with current technoscientific art practices. The overall premise for the show was framed for an academic gallery within a university context as part of a doctoral project for an educated audience. The overall exhibition premise is informed by recent theory from the last ten years involving post humanist, feminist new materialist and technoscientific enquiry and displays deep research processes and knowledge exchange moving between the disciplines of science, art and technology.

Lawler-Dormer’s rather magisterial and slightly condescending rhetorical question begins by mentioning critical rigour and then continues with a series of self-privileging and jargon-ridden cliches the office of any “communications director” could be very proud of. The relationship between critical rigour and a press statement is a severely conflicted one, a situation of which Lawler-Dormer seems marvellously unaware. Her belief – which is all it is – that the mere statement of propositions somehow constitutes a kind of critical rigour is wholly delusional.

I agree, Lawler-Dormer. Although several of the pieces appear straight-forward, I think they command a longer attention span and a more in-depth consideration of the ethics of technological advances and where boundaries lie between person and machine.
Particularly the work 'Leah,' would be perhaps more interesting and thought-provoking in terms of who is considering whom, or what, than merely 'underwhelming'.

>>>>>>Can someone please remind my seriously malfunctioning self/system when it was that Aristotle coined the term ‘deus ex machina’, that one time Nazi Party member Martin Heidegger warned us of modern technology, or Donna Haraway wrote her brilliant Manifesto. . . . .

Whatever the case, my image-recognition read outs are reporting a takeover of the art dept. by space cadets.