Paint as Fuel or Food 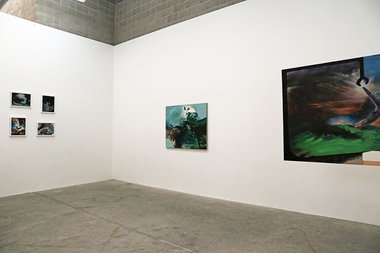 Zhonghao's imagery gleefully riffs on commercial countercultural aesthetics. Elements in the painting often allude to the idea of meng (literally “sprout”, recently adopted on Chinese social media as a slang term for “cute” - inspired by a popular trend to insert small plastic leafy twigs into the hair so that they look like they're growing out of the head). Chunks of imagery become floating signifiers and quasi objects in the complex meme ecology of popular media.

Ilam-trained and now living back in his native China, Zhonghao Chen is an artist fascinated with painting as a process of consumption and indulgence, hence the heavily-loaded brushwork and the palette scrapings set aside and applied after the fact. Paint is analogous to fuel or food for the painter and the painting.

The influence of Chaim Soutine, Max Ernst and Neo Rauch announce themselves. But there are quieter presences - the Qing dynasty painter Shintao (1642-1707) who sought to subvert traditional ink painting aesthetics by deconstructing the classical Chinese landscape into proto-expressionist inkblots, and Theodor Adorno’s Negative Dialectics - the principle of non-identity, “that objects do not go into their concepts without leaving a remainder.” Both might be thought of as connecting through the Taoist notion of being and nothing existing simultaneously, or of absence as being an entity in its own right.

His impish liftings from pop culture find affinity with 1970s lowbrow art and the pop surrealism and massurealism movements of the 1990s. This is a heady brew of postmodern eclecticism, not always as perfectly digested into the chyme of synthesis as it might be.

Zhonghao’s imagery gleefully riffs on commercial countercultural aesthetics (Roger Dean‘s designs for Yes album covers and Chris Foss’ science fiction novel covers come to mind as potential touchstones). Elements in the painting often allude to the idea of meng (literally “sprout”, recently adopted on Chinese social media as a slang term for “cute” - inspired by a popular trend to insert small plastic leafy twigs into the hair so that they look like they’re growing out of the head). Chunks of imagery become floating signifiers and quasi objects (almost folklore-like) in the complex meme ecology of popular media.

The muddy palette, loose gestural slather overwhelming the figurative, the subtopian materials and crude interventions into the canvas-as-object suggest the cheap and cute of mass-produced Chinese consumer culture, the shabby knock-off Disneyland, trapped like flies in the thickly encrusted impasto. They speak, too, of a fragility and optimism. The use of surreal deep-green landscapes as a unifying matrix mockingly hint at the higher aesthetic aspirations of fine art, and the nigh-sacred traditions of landscape in Chinese and Western art, however. Zhonghao’s paintings are nothing if not performative.

It is clear that Zhonghao aspires to the kind of explosive and drama of the early European avant-garde. This is evident in the shaped canvases, exposed stretchers, and expressionistic brushwork, but at times these shenanigans threaten to overwhelm the richly imagined, atmospheric imagery of the painted surface.

If a lesson may be applied from the Tao, these distinct aspects need to be brought into balance. The synthesis is so very nearly there that you can smell it, even touch its hem before it evaporates, which is frustrating. But when it works, it works brilliantly, drawing on pop art, abstraction and landscape, gesture, plain and colour in diverse media, viewed through the fictive scrim of the artist’s playful intellectual process. Again, maintaining a balance between these issues seems to be an issue in ongoing development in the career of a very talented emerging painter who stands in a very interesting place between New Zealand and Chinese contemporary art worlds.