Coleridge and Shakespeare as a Springboard to N*W 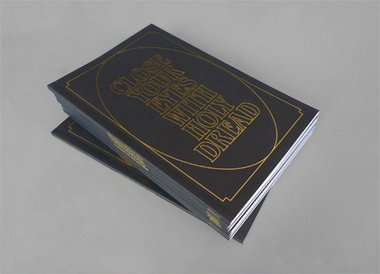 This very interesting little book is a handy introduction to some energetic and thoughtful personalities who might have got overshadowed by other even more dazzling contributors to the exhibition. 'The Shadow of the Dome of Pleasure' was the highlight of Artspace's programme for 2015, an event of national significance, and this accompanying publication tangentially channels that energy towards explorative online keyboarding as an innovative form of poetry and/or criticism.

Close Your Eyes With Holy Dread
Edited by Henry Davidson

Designed to be published in conjunction with the Artspace exhibition, The Shadow of the Dome of Pleasure, that was curated by Henry Davidson, Davidson has here with Close Your Eyes with Holy Dread (the title - like that of the show - a quotation from Coleridge’s Kubla Khan) organised, selected and sequenced a variety of texts (essays, poems and a suite of proposed stories) that connect with the exhibition themes.

While The Shadow of the Dome of Pleasure had its moving image works installed within a dark maze overseen by Alexander Laurie & Biljana Popovic, for Holy Dread DD/MM/YY has designed a dark covered ‘gothic’ booklet that relates effortlessly visually to both the earlier installation and this short collection of texts. And although a couple of the poems were used in performances and videos, there is also a sense that this publication is quite independent. And in relation to the show, physically compact and compressed - as opposed to expansively dispersed.

Both exhibition screenings and readable artifacts however examine the multiplicities of desire and affect mediated through role or performance; fluid effect moving on occasion through different genders, sexualities, ethnicities, human/robot/programmes; behavioural code samplings fragmented, rearranged and shuffled into disembodied streams.

The largest contributions come from: ex-Sonic Youth musician Kim Gordon (five lists of brief ingredients for five stories); LA poet/essayist Andrew Durbin (with this poem); Samuel Te Kani (who recently exhibited in Christchurch, and who here writes on the phenomenology of cinema), Evangeline Riddiford Graham (whose commissioned poem Villanelle was performed at the Pleasure Dome opening by Victoria Abbott, and which is presented in Holy Dread as cursive script font and as painted text, watery bronze brush-writing - hovering and mystical - on black boards); and Holly Childs the Australian writer.

Durbin and Childs have lots to say about commodity fetishism, brand culture and the sociology and dynamic of cyberspace. Shorter - but perhaps more eloquent and more moving - poems come from Hyde, Darling and Graham. Graham and Hyde (1906 -1939) are fantastic manipulators of the sound of words as well as meaning. They instinctively understand the materiality of listened to (while read) language. Some of the other contributors don’t. It’s a rare gift.

Like a symmetrical goblet the publication is bookended by Shakespeare (a quotation from Antony and Cleopatra at the beginning, and Holly Childs’ elaborate riffing on Romeo and Juliet at the end), with Evangeline Riddiford Graham verbally layering references to a poisoned chalice in the centre. It is extremely clever with its juxtapositions and sequencing.

This interesting little book is a handy introduction to a selection of energetic and thoughtful personalities who (flamboyant as some are) might have got overshadowed (so to speak) by other even more dazzling contributors to the exhibition. The Shadow of the Dome of Pleasure was the highlight of Artspace’s programme for 2015, an event of national significance, and this accompanying publication tangentially channels that energy towards explorative online keyboarding as an innovative form of poetry and/or criticism. Some older experimental ‘language’ writers might think that is ballyhoo - that these writers are too young and too internet obsessed, and that their work is merely trendy digital dilettantism.  This booklet (with its unusual mix) however resists that. It insistently presents to curious artlovers the idea that a new form of poetry might be evolving, and that it is well worth taking a serious look.