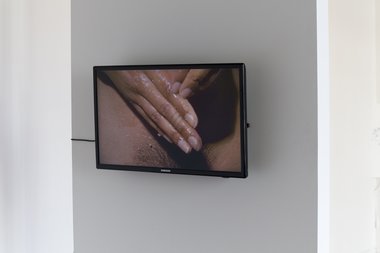 Feminism's origins as a grassroots political movement based upon a relatively unified notion of gendered difference have largely given way to a focus upon the ways in which issues of race, culture, sexuality and class are linked to create unique personal subjectivities. Despite this shift towards intersectionality, key elements of earlier feminist artistic exploration often remain.

Enjoy Feminisms, at Enjoy Public Art Gallery in Wellington, presents eight works by contemporary female artists. The project consists of three “onsite performative/participatory works, and two offsite participatory works,”(1) all of which directly address the “ways that feminisms are involved in the lives and perspectives of these artists.”(2) Wellington has played host to a rich heritage of women-only exhibitions, from 1977’s A Season’s Diaries conceived by Joanna Margaret Paul, to the Women’s Gallery which operated from 1980 - 1984, and City Gallery’s 1999 exhibition Alter/Image, curated by Christina Barton and Deborah Lawler-Dormer. Enjoy Feminisms - in tandem with the accompanying online journal Love Feminisms - points to an enduring desire to create spaces in which the complex issues surrounding feminism can be discussed and displayed in a creative context.

Reading the leaflet which accompanies the exhibition, viewers are informed that:

Feminism in Aotearoa/New Zealand and abroad is often represented in the mainstream media as a white middle-class issue focused around sex and career. But this barely touches the edges of the multiplicity of feminisms and how feminisms have affected all of our lives… Feminisms to these artists weave together the complexities of race, sexuality, class, and nationality.(3)

This, of course, reflects a wider ideological shift within feminist discourse. Its origins as a grassroots political movement based upon a relatively unified notion of gendered difference have largely given way to a focus upon the ways in which issues of race, culture, sexuality and class are linked to create unique personal subjectivities. Despite this shift towards intersectionality, key elements of earlier feminist artistic exploration often remain - in this exhibition for example, the fraught nature of the representation of the female body seems to permeate each of the works.

Within Enjoy Feminisms, a sense of unknowability appears to be at the heart of this representation of female identity. The labelling is minimal, a single label informing us of the artist of each work according to its location within the exhibition space. Titles are not displayed for any of the works, and many are in fact untitled. Fragmentary, evading the viewer’s gaze, treading the fine line between visibility and invisibility, presence and absence, the artists here all engage - to various extents - with the problematic nature of women’s bodies as a visual semiotic.

As you reach the top of the stairs and round the corner to enter the gallery space, Dilohana Lekamge’s video work becomes visible through the gallery’s open door. The image makes an immediate visual impact before the threshold into the space is even crossed - it is at once confrontational and intriguing. Playing on a continuous loop is footage of a naked female torso, cropped from just above her belly button at the top of the frame, and displaying the upper section of pubic hair at the lower edge of the frame. This strategic cropping insinuates the sexualised female body, whilst simultaneously refusing to render it explicitly visible. Rather, the torso acts to frame the woman’s hands as a site of action. Covered in what appears to be a coarse, perhaps salt-based scrub, the hands work to exfoliate each other methodically and obsessively, almost to the point of aggression. The repeated nature of such a small-scale activity implies compulsion, the video’s repeated loop rendering it a discomforting sight.

This provocative activity is counteracted by the stillness of the exhibition’s other untitled video piece. Created by Single Brown Female (consisting of Leilani Heather and Talia Smith), the video is accompanied by a large photographic work which hangs on the wall at right angles to the monitor. Both film and photograph depict a woman whose face is made invisible to the viewer - one with her back turned to us, the other with her face cropped from the edge of the camera’s frame. It is impossible to know whether these are two images of the same woman, or if they in fact depict two separate people. These images are quietly evasive, both disallowing the resolution of the subject’s identity.

In the photographic work the woman is pictured in an earth clearing, facing a forest. The presence of a gentle wind can be discerned in the movement of her hair. The landscape serves as both background of the image, and object of the woman’s gaze. Evading our gaze she remains unknown to us, so too does the woman depicted in the video. Here the trees of the photograph are replaced by a domestic interior of wallpaper and an indoor plant. Curls of the woman’s hair are caught slightly amongst the plant’s leaves and as her body moves in infinitesimal increments the movement of her hair echoes that captured in the photograph. The footage ends with the woman stepping out of the frame, her evasion of the viewer’s gaze moving from partial to complete.

The final piece in the exhibition, Self-Portrait, mixed media on paper, by Sian Torrington, is ultimately the most effective in the small space at Enjoy. Its size - the work covering the gallery’s entire end wall - physically dominates the room. More than its imposing size though, it is the work’s intricacy and unravelling richness which demands our attention. Created from multiple pieces of paper of varying size pinned to the wall, the work is part drawing, part structural installation, and part unresolvable puzzle. The human body is depicted repeatedly; almost obsessively. Isolated parts of the human anatomy are worked and reworked, layers of depictions existing upon one another, evading fixity.

At once vast and intricate, the piece works effectively as an entire composition, each fragment overlapping with the others in a way which creates a visual wall which initially appears a unified work. The closer you examine however, the more definitively the work refuses coherence. Materials are interchanged and worked together. Paper which has already been marked is torn, leaving the ripped edges blank and exposed. These pieces are then structurally pieced back together, some curving away from the wall, whilst others hang flat. The depicted human figure here is also a site of ambiguity, gender is often almost impossible to discern. Mutability is at the heart of the visual enactment of gender here, refusing any artificial sense of coherence. The fragmentary, multi-layered way in which the work has been constructed acts as a powerful material reflection of the depiction of the subject’s identity.

With such a small number of gallery-based works, there is a danger of the show appearing limited in scope. However, curator Jessica Hubbard has cleverly avoided this through making the compelling decision to place residual traces of the performative works within the gallery space. The Dunedin-based all-female collective, Fresh and Fruity, and Faith, Leafa, and Olive Wilson are both represented within the gallery space itself, these physical markers pointing towards a transient performed action which is already absent. However, the utilisation of the internet as a site of documentation - in this instance the provision of filmed material on the Enjoy Gallery blog here - contributes to a richness of discovery regarding these works.

The work of Faith, Leafa, and Olive Wilson - Fili, which was performed and recorded on Saturday November 14, and can be viewed online here - is particularly effective in this respect. Laid on the gallery’s polished wooden floor is a simple blue tarpaulin, upon which we find piles of human hair. Both blonde and dark, the hair is spread upon the tarpaulin in a manner which suggests it has fallen this way rather than been intentionally arranged. Watching the documentation of the performance, we see the culturally specific and deeply personal method by which the human hair of these women came to occupy this space within the gallery. (Since my visit to the gallery, a monitor displaying this footage has been placed upon the tarpaulin for the viewer to see in situ.) That a performance can to some extent be pieced together through a combination of video and the tangible remnants of a physical presence, makes the performance accessible to a far wider audience than that initially able to attend.

The traces left by the absent ghosts of performance echo amongst the onsite works to contribute to a multi-layered richness of experience. The utilisation of new technologies and alternative spaces for display has historically been typical of much feminist practice which has attempted to disrupt the cultural hegemony of the conventional western gallery system. Enjoy, with this multi-layered exhibition experience, has created an extension of such an exploratory feminist practice. 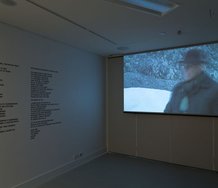 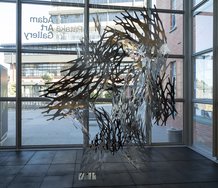