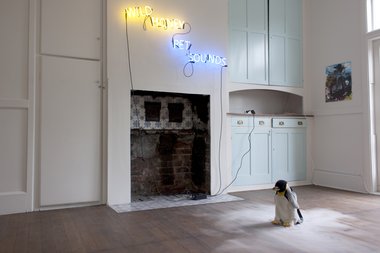 The temperament of both exhibitions is typified by the commentary of Samuel Te Kani and Timothy Webby in the gallery handout: ‘For this exhibition, images are esteemed not for their ability to reflect back to us what is already in place but as strange and untimely fruits.' Fire in a Fennel Stalk and Whether1Owe.3want1it0or5no… hold out the promise of certainties and known-truths, only to rapidly take them away as soon as they begin to materialise.

Curator Bridget Riggir has restored my faith in the good work that such arts professionals are possible of achieving through two exhibitions: Fire in a Fennel Stalk and Whether1Owe.3want1it0or5no… Both are well-conceived and delivered, reading as a single installation and as closely related bodies of work, making their experience as exhibitions greater than the sum of their parts - due to good decision making throughout.

Fire in a Fennel Stalk and Whether1Owe.3want1it0or5no… work as a thoughtful encounter and as a sensory experience of sound, colour, animation and materials, all contributing to a layering of complex and evocative narratives. It becomes difficult to pin down exactly why the texts, installations, videos and paintings of these Auckland-based artists resonate so well together in North Projects.

The temperament of both exhibitions is typified by the commentary of Samuel Te Kani and Timothy Webby in the gallery handout: ‘For this exhibition, images are esteemed not for their ability to reflect back to us what is already in place but as strange and untimely fruits.’ Fire in a Fennel Stalk and Whether1Owe.3want1it0or5no... hold out the promise of certainties and known-truths only to rapidly take them away as soon as they begin to materialise. Te Kani’s short sci-fi story located on North Projects’ hallway wall seems familiar, knowable and misleading: ‘His boss’s name was Garth Hader.’ You have to read it twice to make sure you got it right the first time, but it still seems to be wrong.

Dan Nash’s digital video, A Quiet Weekend in Capri, adds to such trickery. Film samples from computer games, Blair Witch film-pans of a dog being taken for a walk, anime and late 1980s computer games, someone in a car filming their journey from the passenger’s seat, 1950s Armageddon movie clips and much more, all set to a sound track that is difficult to pigeonhole - a bit like elevator music morphed with a rejected Donkey-Kong computer-game track. Yet it all holds together. A sound and vision collage that somehow condenses our life experiences to a fragmented encounter with virtual reality and the real thing, assembled in a way that seems indifferent to any purpose or commentary about such a state.

A Quiet Weekend in Capri is complemented by a series of works on paper by Nash in the main room that appear to be inspired by 1950s movies about space invasions of planet Earth - as conceived and executed from storylines that echo War of the Worlds or Day of the Triffids. Like the source material that Nash appropriates there is an awareness of the charm of a cinematic genre that assumes failure as a given in its delivery, allowing him to position his paintings as a kind of ‘what else did you expect?’ experience.

Nash’s works on paper almost appear to have been made to complement Webby’s installation, Falling, in the adjacent space. Plastic holly plants, floor rugs imitating animal furs in tinsel and paint, all complemented with golden plastic cherubs and angels. Falling may look like a make-piece chandelier that has dropped from the ceiling, but as an installation that initially reads as an assemblage of cheap materials, there is also a spirited enthusiasm for the decorative excesses of Baroque and Rococo. Webby’s assemblage exudes a sincerity and affection for the artifice of this aesthetic, willingly recognising the pleasures of such deception.

And Webby has other things going on through the relationship that this work establishes with the space it occupies. Falling reaches beyond its immediate room to the environment outside the gallery window. The plastic holly on the floor inside resonates with the overgrown plants and hedges outside, hinting at further subtle allusions to reality and its ‘strange and untimely fruits.’

Falling is a thoughtfully positioned site-specific work, representing only one of many perceptive and well-considered curatorial decisions in Fire in a Fennel Stalk and Whether1Owe.3want1it0or5no... A pleasure to experience, these exhibitions are informed by an ‘alchemy for slackers’ attitude that is welcome and invigorating for North Projects and for Christchurch.