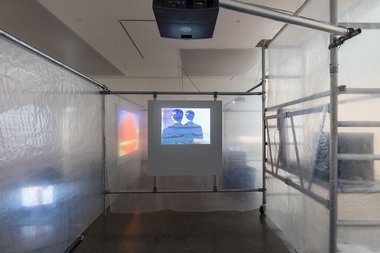 Cullen's design exploits different heights, varied sized monitors and deliberately limited methods of screening and sound control. The rumpled plastic sheeting's translucency helps break down a sense of rigid compartmentalism, encouraging a sense of flowing osmosis where the activity on distant monitors can be easily detected. Almost all the works with an aural component have headphones, except for Rachel Shearer who presents an occasional sustained piano wire strum to match a twinkling starlike configuration of lights on her screen.

Focussing on associative allusions to neuroscience and its interest in the synaptic processes of thinking, and the multiple motor functions of The Brain as an organ, this show - initiated and commissioned by Circuit and curated by Christina Read - presents seventeen extremely varied videos from fourteen artists, shrewdly installed within an approximately ‘brainlike’ structure of gridded scaffolding, galvanised piping and plastic sheets designed by Paul Cullen. Most of the contributors are New Zealanders, with a handful of Australians and one American.

Cullen’s design exploits different heights, varied sized monitors and deliberately limited methods of screening and sound control. The rumpled plastic sheeting’s translucency helps break down a sense of rigid compartmentalism, encouraging a sense of flowing osmosis where the activity on distant monitors can be easily detected. Almost all the works with an aural component have headphones, except for Rachel Shearer who presents an occasional (loud) sustained piano wire strum to match a twinkling (but fading) starlike configuration of lights on her screen.

Many of the groupings are obvious on a simplifying reductive level, especially those involving body actions and linked on diagonally opposite sides of the gridded structure - (Richard Maloy, Laresa Kosloff, Ronnie van Hout) vs (Rebecca Ann Hobbs, Colie Leung, Daniel von Sturmer) - or with an equally balanced interest (looking outward) in the elemental, such as vectored wind (Sonya Lacey, Owen Kydd, Layne Waerea) vs cascading water (Kim Pieters) and radiating sound (Shearer).

Other components are more about cultural layering, cognition and mental organisation. You could say involving the much larger (thinking) cerebrum as opposed to the small (bodily co-ordination-oriented) cerebellum. Aspects of these have parallels with the contemplative ‘elemental’ works mentioned above, but veering away from ‘nature’. Michael Nicholson’s long work is a highly abstract, non-aural ‘musical’ exploration of saturated colour, rich texture, fast movement and disintegrating cellular structure; Megan Dunn uses appropriated narrative material skilfully recontextualised with tweaked colours, added moving layers, unexpected soundtracks and brilliant editing; while Rainer Weston celebrates the pixelated universe of an advanced digital technology that is almost fifteen years after Dunn.

The ‘dissolving’ of the membrane-walled compartments mentioned earlier (through murky transparency) brings to mind the famous medical case of Phineas Gage who in 1848 suffered an appalling injury where a crowbar passed right through his head. That he lived, spoke, and walked around for another twelve years indicates (despite his personality severely changing) that our nervous system is not like conventional wiring or computer circuitry, but something far more complicated and adaptable - even though this case is extraordinarily unusual.

Nevertheless there probably is a sound argument that this show’s organisation is more akin to the structure of a constantly explorative mind than a functional, implementing and mechanistically purposeful brain. And though it is strange to dualistically separate the two, and may be fraught philosophically, this affinity is because of the mind’s ability (as a brain-based attribute or property) to sometimes be aware of a lot of things simultaneously - to restlessly daydream and jump about amongst variously assorted options in a state of distraction - as part of a zigzagging and freewheeling process of problem solving. The type of problem solving that can incorporate spontaneity and improvisation, and that involves not just art, but inherently all disciplines. As brain researchers go, any suggested connections found in this exhibtion are possibly more the conceptual domain of Michael Corballis and Antonio Damasio in their parallels than say Joseph LeDoux - more ‘philosophical’ psychology and less clinical ‘chemical’ laboratory.

With this show, while it is great to see authentic videobased works like Megan Dunn’s that are particular to that medium (and rarely seen now), as well as items by much older artists such as Michael Nicholson, and overseas based contributors like Owen Kydd (or South Island artists like Kim Pieters), some of the other inclusions - such as Ronnie van Hout’s Backdoorman II, Richard Maloy’s Body Arm, and Rebecca Ann Hobbs’ 246 meter bridge have been overexposed in Auckland. Nevertheless this exhibition is an admirable experiment, an unusual method of presentation - with effective sound control, and provocative ideational speculation.