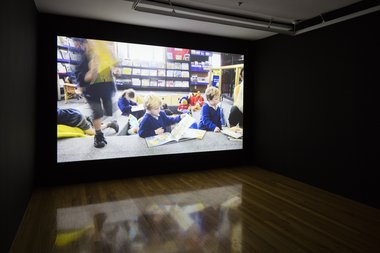 With this show you have various biographical books with certain pages marked with yellow stickers, you have the old photographs of each of the eighteen façades, the framed portrait of Carnegie himself, and there is a recording (part of a video) of the man reading from his tome, 'Gospel of Wealth' (“the man who dies rich, dies disgraced.”). Of the whole presentation, Smith's two beautifully shot videos are the most intriguing.

Using four linked spaces (two for projected videos filmed in the North and South Islands and separately collated; two for tables of biographical books, archival photographs, and photocopied, help-yourself information), Mickey Smith here presents some fascinating history about the American industrialist and philanthropist Andrew Carnegie, and how between 1886-1917 he donated money to build free public libraries as part of a worldwide charitable programme - including libraries in eighteen New Zealand towns and small cities. She examines his personal philosophy, and ties her research in with a zealous tracking down of the original sites - to see what has happened to the original buildings in both North and South Islands, and if they are still being used. And what other unsuccessful New Zealand libraries applied.

I must say that I usually have very little patience with shows that fixate overly on information without some sort of sensual carrot to draw visitors in (to make them pause) for closer examination and perhaps reflection. However all my life I have greatly enjoyed municipal libraries, and because I feel passionately about their value, this exhibition stirred me. This is history that really is pertinent today, especially for places like Christchurch where I’ve heard there are now plans to close many branches down. And Carnegie himself - who as a boy raised in desperate circumstances, took advantage of a free library (for boys only) of 400 books in Allegheny, Pittsburg (the Pennsylvanian town his family migrated to from Scotland to escape poverty) - insisted borrowers pay no charges in the 2507 libraries he paid the materials and construction costs of worldwide.

Smith, an American who moved to New Zealand a few years ago, has discovered that of the eighteen New Zealand Carnegie-funded libraries, six (Hamilton, New Plymouth, Hastings, Levin, Greymouth and Alexandra) have disappeared, one (Westport) is vacant, nine (Onehunga, Thames, Cambridge, Dannevirke, Hokitika, Fairlie, Timaru, Gore, Dunedin) have been repurposed, and two (Marton, Balclutha) still operate. She is a very good writer and her informative account of her tour and visiting of sites (in the photocopied sheets) is excellent reading, especially when tying it all in what she initially discovered about the funding here from Wellington’s Alexander Turnbull Library and the original Carnegie archives.

Andrew Carnegie (1835-1919) is a fascinating character, controversial because of his fraught relationship with unions in his steel mills (in 1892 there were strikes, riots and deaths), yet one who was unusually articulate and vocal about the responsibilities of possessing wealth (he gave most of it away, was picky about the desirable attributes of the recipients, and wrote copiously about the reasons for his generosity and its focus). He was also vehemently opposed to American colonialism and a pacifist who was heartbroken (he refused to speak) with the advent of the First World War. Very few New Zealanders have heard of him - even though he was once the world’s richest man - yet one can understand why Smith has developed this project, especially as she grew up in Duluth where there was a conspicuous Carnegie library she used as a child.

So with this show you have various biographical books with certain pages marked with yellow stickers, you have the old photographs of each of the eighteen façades, the framed portrait of Carnegie himself, and there is a recording (click on this link to the video) of the man reading from his tome, Gospel of Wealth (“the man who dies rich, dies disgraced.”). Of the whole presentation, Smith’s two beautifully shot and edited videos are the most intriguing - not so much as documents about architectural remnants, or accessible book storage - but more about how those spaces are now used for other things, like local orchestra or bagpipe band rehearsals, or coffee houses and pizza restaurants. And even though Smith says in her notes that she comes from a union-oriented family who viewed Carnegie’s actions with deep suspicion, this exhibition definitely exudes affection for this complicated, but indisputably generous individual, and the disappearing traces of his legacy here.

It is outrageous that the university is considering doing this. Specialist libraries are essential for the values that a competent ...

It is outrageous that the university is considering doing this. Specialist libraries are essential for the values that a competent tertiary education stands for. Here is a rally for book lovers (and borrowers) organised for Monday, 12.00 --outside the main uni library.
https://www.facebook.com/events/285962505274715/?notif_t=plan_user_invited&notif_id=1524601504176048