Masochism and Play as Art 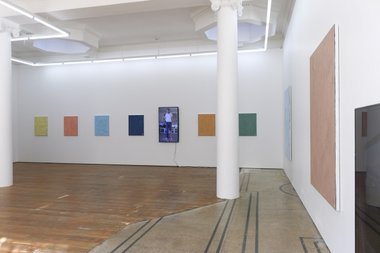 In the background of these three performances, behind Patterson's standing figure, MTV videos on a monitor play highly sexualised pop music, two being sung by curvy pneumatic dancers as a sort of droll foil for the artist's suppressed agony as he tries to control his inclination to yelp. This distraction is a form of penitential flagellation in reverse.

Campbell Patterson here presents an assortment of four videos and nine paintings, plus there is in a corner a stack of free (help yourself) books, each one an anthology of photographs of Patterson’s temporary, crumbled-muesli-bar-on-carpet ‘paintings’, and ‘collaborations’ with his parents’ dog Frieda, where the energetic mutt has disembowelled or decapitated various soft toys.

Self-effacing humour in a domestic setting is one of Patterson’s hallmarks, and - in the Mike Parr, Gina Pane performance tradition - so is masochism. Maybe that is an exaggeration, to claim Patterson enjoys self-inflicted pain. He has a particularly hairy body and three of the videos involve him peeling off very long strips of elastoplast, or multiple (but just as sticky), smaller bands.

Most of us, in such a situation, would prefer to get through the pain of ripping out body hair as quickly as possible, so that the ‘torture’ is all over and done with. With Patterson though, it is prolonged. We see him in new normal music 2 & 3 psyching himself up, shutting his eyes and rocking his head. He is bracing himself for the next burst (with small strips) of yanking off sticky tape.

Sometimes this activity is hidden under his loose clothing, or (with long strips) is visible on his exposed leg - the elastoplast being attached to a long piece of string which he slowly pulls. Some low ends he pulls up (Drag up), other high ends (Drag down) he pulls down. There seems to be some sort of pun about erections going on; a joke about mind over matter and remote control.

In the background of these three performances, behind Patterson’s standing figure, MTV videos on a monitor play highly sexualised pop music, two being sung by curvy pneumatic dancers as a sort of droll foil for the artist’s suppressed agony as he tries to control his inclination to yelp. This distraction is a form of penitential flagellation in reverse. Any low frequency whimpers are hidden by the blaring soundtrack, while the experienced bursts of sharp pain become internalised, even to become pleasurable as ‘new normal music’.

The fourth videoed performance involves Patterson in a gym (itchy gym), standing amongst rows of exercise machines, and scratching (brushing? massaging?) himself with a bristly-headed, long-handled broom. More amusing than the others, but related (those straw bristles look painful), Patterson seems to give his whole (loosely clothed) body a good working over, as if he has a constantly moving, insatiable itch.

Then there are the pictographic paintings, linear configurations that use very thin lines masked out with curly lengths of string - with some straight, others zigzagging. These Last paintings look related to Paul Hartigan’s neons, but are skinnier in line, so skinny that if you stand far enough away they disappear into the background colour field.

Several layers of oil paint have been applied, each layer mixed with chopped up lengths of thread to introduce a subtle surface texture. The pulled-off string as a mask leaves parallel wobbly edges, and each thin line has its own hue and doesn’t relate spatially or cohesively with its companions. Though independent of each other, the lines en masse attain a collective density that doesn’t describe but can formally repeat. They often overlap and contrast (or converse) with their neighbours, hinting sometimes at edges of forms that will never materialise. The curly ones being hairlike, allude to the videos.

That's a fascinating idea. I mistakenly thought the pig was a dog. Painting surface as touch screen is intriguing. To ...

I'm interested to know the relevance of the Farm Heroes pig in the corner of the 'Last Paintings'. It's such ...

I'm interested to know the relevance of the Farm Heroes pig in the corner of the 'Last Paintings'. It's such a specific reference that it makes me think the lines are somehow related to paths being traced by a finger across the mobile phone screen as the game is being played?

That's a fascinating idea. I mistakenly thought the pig was a dog. Painting surface as touch screen is intriguing. To me they seem more carefully drawn than that. Not random. As I said, like pictographs.