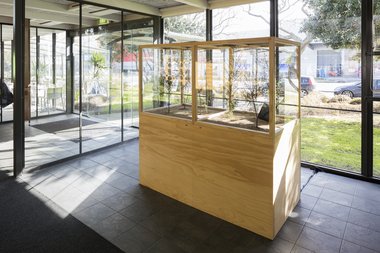 The living stick insects we see are from the original NZ species that then changed from sexual to asexual, not the ones that evolved in England. There is also another variety which has been cross-bred from Scilly Isle specimens and New Zealand examples in a Portacom building in Palmerston North. The artists (Jenny Gillam and Eugene Hansen) and scientists (Steve Trewick and Mary Morgan-Richards) have been curious to see if the Scilly Isle females can breed with New Zealand males.

In recent years there has been more and more collaboration between artists and experts in other disciplines, not just casual friendships where artists and nonartists enjoy each other’s company and share ideas to explore a theme together, but through tertiary institutions at post-graduate levels, or government organisations, where official liaisons are formed that result in joint funding applications for extended projects with committed partnerships.

In this show, artists and scientists collaborate. Not in this display specifically (its setting up), but in the copious research that underpins it.

Leonardo da Vinci with his experiments, inventions and drawings, is a conspicuous example of a multi-talented individual who was interested in a vast range of investigative activities, blending science and art. On a less spectacular level, with the Surrealists there were film makers like Jean Painlevé and art writers like Roger Caillois who were passionate in their studies of animal life, particularly with themes like mimicry or cannibalism that could be connected to human behaviour. Painlevé made extraordinary films about seahorses, jellyfish and octopuses while Caillois theorised at length about praying mantises and stick insects in articles for George Bataille’s magazine Documents. In this country, much much later, Billy Apple is known for his collaborations with medical scientists.

Here in Te Tuhi, the central theme is that of the breeding habits of stick insects, in particular a colony of females which breeds without male participation, a colony from New Zealand which (via eggs on plant specimens) accidently snuck into a botanic garden and nursery in the Scilly Isles, off the coast of Cornwall. In the foyer of Te Tuhi, near the front entrance, we see a wooden vivarium containing about a dozen related stick insects, living (and feeding on) four or five kanuka shrubs. Naturally these oddly linear creatures are extremely hard to spot, as they slowly clamber about nibbling on the leaves.

The living stick insects we see are from the original NZ species that then changed from sexual to asexual breeding, not the ones that evolved in England. There is also another variety which has been cross-bred from Scilly Isle specimens and New Zealand examples in a Portacom building in Palmerston North. The artists (Jenny Gillam and Eugene Hansen) and Massey-based scientists (Steve Trewick and Mary Morgan-Richards) have been curious to see if the Scilly Isle females can breed with New Zealand males. I guess there are a number of questions that can be asked, such as can asexual females breed in solitary isolation, or can they only breed as part of a community of females? If the latter, can females from the two locations breed together (if such a question makes logical sense)?

In the big room, the largest display space in Te Tuhi, we find an elegant textual presentation focussing on the tree types and containers sent from New Zealand in 1908 to Major Dorrien Smith, the founder of the Tresco Abby Garden mentioned above. No one knows which particular plants (all listed with their scientific names on the long wall, with layout done by Adrian McCleland) had the eggs.

There are also duplicates of the Wardian cases (miniature ‘A-frames’ with handles and containing self-watering environments) used to carry the small New Zealand trees and protect them from pollution. These units could be dismantled, stacked and flatpacked for efficient transport and reuse, while the one way ocean journey conveying the plants took, as the title says, 42 days.

Also in the big gallery we find a replica of the Portocom building located in Palmerston North, a Physical Containment facility prefab where living stick insect specimens from the Scilly Isles are kept under strict quarantine conditions under artificial lighting. At the opposite end of the room we see a tree suspended from a hoist in a rope net, alluding to the global transport of plants by sea, and the inevitable ecological risks involved with such projects.