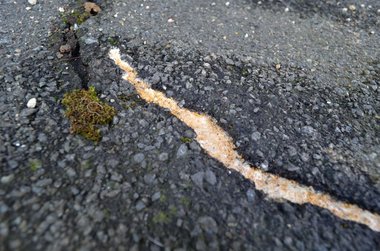 The works are divided between the Blue Oyster on Dowling Street, the footpath and street outside, and Duty Bound (a book binder) on Crawford Street, the latter of which has a history of artistic activity. Geoghegan has decentralised the white cube of the Blue Oyster and facilitated discussions about local histories by initiating a public programme that invites a number of established Dunedin based artists to recall their lived experiences in conversation, as well as performing and showing videos.

A Tragic Delusion juxtaposes the largely unrecorded verbal histories of artist run initiatives in Aotearoa with the work of four emergent artists working within painting, sculpture and performance processes (1).

The works are divided between the Blue Oyster on Dowling Street, the footpath and street outside, and Duty Bound (a book binder) on Crawford Street, the latter of which has a history of artistic activity. Geoghegan has decentralised the white cube of the Blue Oyster and facilitated discussions about local histories by initiating a public programme that invites a number of established Dunedin based artists to recall their lived experiences in conversation, as well as performing and showing videos.

This is incredibly important given the way these histories have become verbal hearsay over time. The artists include Adrian Hall, Stuart Hall, Kim Pieters and Nick Knox. The public programme and the show itself, questions the disconnection between past and current art historical narratives around creative production in Dunedin. The work of Jordaan, Dowling, Taylor and Richards asks how far have we come?

In search of gold, the stone was there all along (2015) calls to mind the foundation of Dunedin’s colonial history from goldrush era wealth to the physical development of urban infrastructure, such as roads and footpaths. Outside of both sites (the Blue Oyster and Duty Bound) Deanna Dowling has poured gold and Oamaru stone into cracks in the footpath. In these gestures she highlights the disintegration of Dunedin’s former status as the wealthiest city in New Zealand, by drawing attention to the very literal way in which the economic structures of the city are cracking. (The reason I first moved to Dunedin almost ten years ago was due to my father’s new job at the now struggling Macraes mine. (2))

The unseen labour of Dowling’s actions also calls to attention the visibility of road works in certain parts of Dunedin, especially around George street and the University of Otago. The use of Oamaru stone emphasises its extensive and prolonged use as a building material in some of the oldest and grandest buildings in Otago. Oamaru stone was used to build both the Dunedin Railway station and the Dunedin law courts, and recently, the area beyond Princes street has been undergoing a process of ‘beautification’ or gentrification too, especially on Vogel street.

In the gallery, these subtle gestures are presented as a short film of stock images Dowling took of the pouring of the gold, and of limestone quarries in Oamaru and Dunedin. There are also a number of shots of a building built in Oamaru stone which sits between both spaces (on the corner of Queen’s gardens and Vogel st) and has largely been left to degrade, yet a wall of public graffiti art by Jon Thom sits in the background (3).

Within Duty Bound, Robyn Jordaan presents a selection of large scale MFD cards. These cards are hand cut and presented as a series of aces of every suit, so as not to present any form of hierarchy. The use of blue and yellow describes both the University of Otago’s sponsorship of the Highlanders and the gentrification of the University and the surrounding North Dunedin area. The University has been ‘redeveloping’ both the campus and iconic ‘scarfie’ locations, while raising the prices of courses, and reducing various departments such as Design.

These cards will move throughout the duration of the exhibition and are representative of the way in which we must play our hand in the game of money/life as it exists within the capitalist framework. Yet, without hierarchy it is a game that anyone could play and succeed. Jordaan’s practice can thus be described as ‘performative sculpture’ and much of her work analyses the effects of gentrification through the use of her body to physically move objects.

Jordaan does not make performance. Her gestures are mundane explorations of space based on chance encounters with objects and motivated by corporeal concerns of space, class and economics. Often they are situated within an absurdist sense of humour. Although action and making-based, her work is nuanced and centred around conversation - as is evident throughout the body of work she presented for A tragic delusion.

Moving objects between both spaces, as well as exploring the more derelict industrial area and the grand, old buildings which surround it, Jordaan’s gleaned objects are repurposed into a sculptural context. These subtle actions inform the way in which the artist engages with space through the potentiality she sees in disregarded objects. Many of her actions recall her video work Three tokens doesn’t dry the clothes (2014), as well as Agitprop (with Dan Sanders) at Fresh and Fruity (2014), Paying Homage as part of the City Ups festival in Christchurch (2014) and People Way (2015).

Traversing Particles (2015) by Tomas Richards is centred around the body and the physicality of gestures, much like Jordaan’s work. Inside the Blue Oyster gallery, Richards had a selection of the floorboards removed. In the same way that public institutions tape out a space around an artwork to protect it from visitors, Richards taped around these exposed floorboards. Over the duration of the install and the first week she, with the assistance of Jake Fairweather carried out a series of similar movements transporting dust, rubbish, and debris between both spaces.

Traversing particles exposes the way we often view art works as precious and ignore the potential of waste. Richards works on a muted scale; his gestures are subtle and small, such as taking tiny dust particles from Duty Bound and placing them around the edges of the window frame at the front of the gallery. He also made a sound work in Duty Bound doorway which sampled a sparse array of street sounds and pieces of conversation.

In a performance work alongside Adrian Hall, Richards methodically polished the floors of Duty Bound, while Hall responded to both Richards’ actions and the sound work softly permeating the space. Richards’ actions made one think of the architectural histories of these spaces, as well as deconstruction processes and actions, and the social and physical labours of space. Like Dowling and Jordaan, Richards’ labour was largely unseen and a simple gesture, rather than a performative spectacle.

Dismissing the notion of a ‘finished’ art work, Cobi Taylor’s work dealt with scale, traversing between painting, installation and sculpture. Both Definitively Unfinished 1 and Definitively Unfinished 2 were site specific with Taylor repurposing cut glass from the Blue Oyster and vinyl skin from a Les Mills billboard (4). Taylor transformed these discarded objects through painting, dragging, cutting and dispersing a range of materials across each, including indian ink, latex and acrylic.

Although her concerns may seem founded in painting, the processes were situated in the body. One could imagine her body physically navigating each of these works. I thought too of the irony of a Les Mills billboard being remade through Taylor’s sporadic patterns of movement, which then invited the viewer to touch and walk upon. Again her labour was unseen; it was by chance and the exploration of potentiality in objects and materials that she created her work.

A tragic delusion analyses the history of sculptural practice, by starting with its building blocks, and drawing attention to the tragic remains of Dunedin’s grandeur. Geoghegan allows for the differences between each individual artist’s‘ practice, but consolidates each output within shared concerns around bodies, objects, space and hierarchical symbols of class, history and economics. This exhibition is formulated between the dichotomy of tragedy and delusion, yet this delusion is celebratory. A tragic delusion celebrates the freedom of exhibiting beyond white walls, and is contextualised within the significant output of various ARIs active throughout New Zealand in the 70s, 80s and 90s.

(3) The area especially around Vogel Street has recently begun a process of ‘regeneration’ through council commissioned public street art and the now annual Vogel Street festival.

(4) The Blue Oyster is located a few doors up from the Les Mills gym. Patrons of the gym are forced to engage with the space by walking past. They are almost subliminally implicated within the Blue Oyster’s audience. 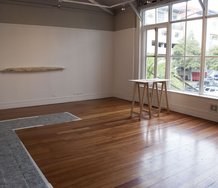 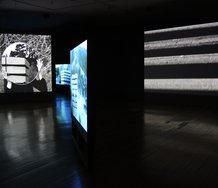 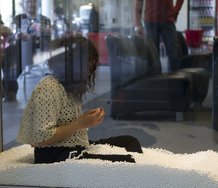