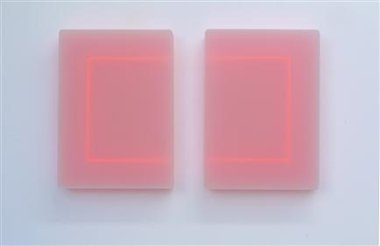 The ‘embedded' thick ‘hot' lines are very difficult to photograph. They intrigue because sometimes crisp and sharp turns to blurry and smudgy, and contained and tidy turns to flared and streaky. The intensity of the colour (and its morphological behaviour) is based on the distance of the ‘drawing' edge from the outer perimeters of the acrylic slab-box.

Although Kāryn Taylor is an Aucklander who has participated in several group shows in the North Island, and had a solo exhibition in Wellington, this - surprisingly - is her first presentation as an individual artist here in Auckland. Her work, in its interest in translucency and surface, is distantly related to the practices of Esther Leigh (in this country) and Larry Bell (in the States). It encourages omnivorous looking: frontally, from underneath, above, and the sides.

Taylor’s works consist of boxlike containers made of translucent acrylic that has been carefully cut, meticulously layered, and then assembled into flat forms that are akin to shallow trays. The internal Perspex-like sheets used have the chromatic properties of fibre optic rods where light seems to have been absorbed through the sides and squirted out the edges to create an intense fluorescent glow. Thus the pink works (especially the largest ones), from a distance, look like rectangular slabs of milky coloured wax (or soap) that have been plugged into a power-socket to light up an orange hot-wire buried inside.

The ‘embedded’ thick ‘hot’ lines are very difficult to photograph. They intrigue because sometimes crisp and sharp turns to blurry and smudgy, and contained and tidy turns to flared and streaky. The intensity of the colour (and its morphological behaviour) is based on the distance of the ‘drawing’ edge from the outer perimeters of the acrylic slab-box, with those borders facing the centre of the room being pale gray (reflecting gallery walls), and the back verso planes - set a small distance out from the hanging wall - generating a bright, reflecting, pink shadow.

Some of Taylor’s vertical pink rectangles are organised in separated pairs, where the glowing lines of the two units interact (spatially compress and mimic) as you move from side to front and past. Other acrylic works (horizontally aligned) use overlapping grey and pink trapezoid forms and seem to reference the perspectival studies of Josef Albers. There are also a few entirely grey works that have no glowing lines at all, containing carefully positioned folded drafting paper where its triangular planes are illuminated by raking light approaching from the side.

Less compact are Taylor’s linear projection pieces where painted planes on the wall, or painted pieces of plywood, have moving lines that slowly sway or rock upon a corner fulcrum or upper horizontal edge, as if the form were extending towards the viewer and being foreshortened. The front window display of a row of coloured vertical fluorescent lights is even more disorienting. It has them clicking on and off in a sequence of waves that move out from the centre (to their sides) when you enter the door. You are only aware of this movement through the amplified clicks and what you see in the shop window reflections on the other side of the street.

With the recent Light Show at Auckland Art Gallery, and the James Turrell survey in Canberra, it is surprising that a civic institution hasn’t put together a national ‘anthology’ of this variety of perceptual research, featuring artists like say Taylor, Shin, Leigh, Culbert, Roche and Hartigan. It is an area that seems deserving of far greater public acknowledgement.