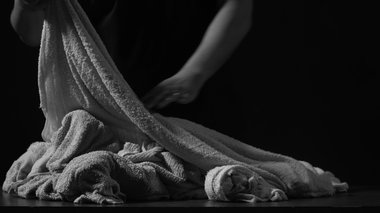 In the third and last section (also black and white), we see a bench top on which a performer lays - one at a time - a sequence of watersodden towels, flannels and cotton bathmats, building up and moulding a form. Using the different varieties of soggy fabric, he kneads, pokes and tucks the material to evoke a wonderfully dramatic hill form. As he progresses, this changes, his intention becoming ambiguous.

Shannon Te Ao
A torch and a light (cover)

This new three part black and white video, A torch and a light (cover), by Shannon Te Ao, recently shown at Te Tuhi,  will be making an appearance next week in the NZIFF, at the Academy on Tuesday and Wednesday afternoons, in Circuit’s short film selection, Place Unmaking. Like his earlier works it references landscape forms and mammalian life, is beautifully shot and has a strong sound component.

It begins with darkness and the spoken translated lyrics of a beautiful precolonial waiata that - in their old fashioned ‘Biblical’ English - sound a bit like Thomas Hardy in their mood of romantic longing. The poem has the male narrator describing the night sky as he pines for his spouse whom he has just terminated a long relationship with, and whom he has left with the elders of her whanau.

The second section, in black and white - after a period of darkness and silence - silently shows the metal wall of an abattoir with its riveted seams, lead pipes and stark industrial ambience: at rightangles to the lens and slowing panning from right to left.

In the third and last section (also black and white), we see a bench top on which a performer lays - one at a time - a sequence of watersodden towels, flannels and cloth bathmats, building up and moulding a form. (There is a range of cotton cloth types and sizes, like what you would find in a hotel guest room.) Using the different varieties of soggy fabric, he kneads, pokes and tucks the material to evoke a wonderfully dramatic hill form. As he progresses, this changes, for his intention becomes ambiguous. In light of the waiata we have just heard, we expect him to transmute the horizontal form into an image of a woman, perhaps sleeping with her back to us.

We also wonder how he can see what he is doing (it must hard to see while reaching over the heap - does he have an angled mirror or a monitor by the camera?) as the performer introduces the last two towels that are now darker in their charcoal tones. He fiddles with the loose towelling on the outer edges on the table, squeezes, pats and prods the floppy, slippery protrusions, pushes and strokes part of the ridge at the top, turns right and casually walks away. We hear his footsteps fade as he saunters down the hall.

I’ve looked at this video several times now and conclude - after a conversation with a friend who was with me - that the final image possibly represents a lion or a dog. However it might be that Te Ao wants interpretation of the final form to be open, and that the evolving process on the bench - the continuum of making, the Godlike modelling - is the point: not achieving a recognisable image. The squishy watery sounds (plus even the occasional squeak of rubber soled shoes) add a lot to this fascinating, strangely moving film.

So what can one make of it overall? The poem, the wall and the towel sculpture appear to be conceptually disconnected, and Te Ao seems to want them to stay that way. This structure reminds me of a glorious Lou Reed song that also consists of three separate parts that, in terms of narration, float independently. Street Hassle is romantic, callously pragmatic, brutal and piercingly wistful (all of these things), yet when the lyrics  are analysed, it is like a disjointed collage - though the music is unifying. Te Ao’s work has none of the vicious nastiness of Reed - it is all tenderness, not partially - and it stirs while being ideationally fragmented. A torch and a light (cover) is the best work I’ve seen from Te Ao. Like Reed at his greatest, this seven minute film has real emotional impact. It’s absolutely haunting.