Counting Off the Waves 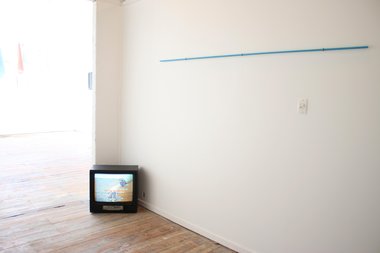 Beneath the Rebar a television monitor plays on a loop, a five minute video in which the game Jenga is played out between two protagonists, referencing in its blocklike architectural formations, the ideals of functionalism and by association, the Platonic vocabulary of pure eternal forms.

Modernism for the last few decades has been given rather a bad press, ever since July 15, 1972, at 3:32 PM when a housing project in St. Louis was detonated, blowing to pieces the hopes of all those utopian fantasies generated during the first half of the twentieth century. Every theorist can quote chapter and verse to explain why the dream failed, why there shouldn’t have been a dream in the first instance, why all totalizing systems were merely another face of fascism.

Personally I like a good totalizing system. So does Stephen Hawking. And this is where it starts to get a little foggy and fuzzy. Science, the hard stuff, never really bought into the relativising shtick, (Einstein apart), unless they were followers of Feyerabend and his epistemological anarchism. They were questers for Truth, seekers after the absolute, in pursuit of some neat and complete package where all equations added up without remainder. Perfection: like a Bauhaus teapot or Mondrian painting.

Lately there has been a softening between the two camps, or at least a willingness to engage with each other. Hamilton artist, Karl Bayly, in his recent exhibition, Ninth Wave Theory (a scientific sounding title), explores the shady territory between the triumph of reason and the victories of deep scepticism.

He sets the tone of this journey by quoting another journey from Douglas Adam’s The Hitchhiker’s Guide to the Galaxy. The particular citation concerns the question of navigation using the “Infinite Improbability Drive”, a new method of instantaneous travel across interstellar distances.

The problem with such haste through multi-universes is one can never be sure where one will end up or what species one will be on arrival. It’s ambiguity and relativity personified. The method was invented - according to the writer - following research into finite improbability that caused hostesses’ undergarments at parties to jump one foot to the left “in accordance to the theory of indeterminacy”. Respectable physicists, Adams added, distanced themselves from such shenanigans because it was a debasement of science, but “mostly because they didn’t get invited to those sort of parties.”

When venturing out on such journeys across the universe, it was prudent practice, apparently, to make sure one always had a towel. There is such a towel in the exhibition, hanging off a tap fixture attached to the gallery wall. Entitled Wisdom from 1978 (Don’t Panic), it has a generically hospital look complete with a blue embroidered line running down the centre, put there by the artist. It represents a horizon line, a form which is echoed in other works from the show and linked to the idea of navigation. The towel also sports in a corner, several yellow embroidered spots that resemble stars, another navigational reference, specifically repeated in the work Milky Way.

The horizon line quickly becomes a central motif in the show. It appears in another item, New Horizons, which consists of a blue painted Rebar (steel reinforcing bar) attached horizontally to the gallery wall. The product figured prominently in twentieth century architectural construction, employed in reinforced concrete and by extension here, it becomes a metaphor for Modernism, given its “make it with new materials” mantra. The title itself, of course, embodies the forward hopeful utopian vision of Le Corbusier and his pals.

Beneath the Rebar a television monitor plays on a loop, a five minute video in which the game Jenga is played out between two protagonists, referencing in its blocklike architectural formations, the ideals of functionalism and by association, the Platonic vocabulary of pure eternal forms. It also monitors in its final collapse - when the blocks topple at the end - the failure of the machine aesthetic which would, according to the dreamers, one day “rise toward heaven from the hands of a million workers like the crystal symbol of a new faith.” While this emblematic trope unfolds, a text that mimics movie credits scrolls down the screen. It includes a list of inventors, their inventions and dates of invention that connect to all the materials used in the show: the Rebar, acrylic paint, light bulbs, fabric and the like.

Bayly thereby addresses the frisson between ideal and reality without discounting the importance of either. Neither the dream nor its failure is privileged. Both are recognized, but in this recognition of failure there exists the presence and acceptance of vision, the need to strive and the acknowledgment of its various accomplishments, albeit tempered by imperfection. In failure there is success. Without vision, the people perish.

Newman’s colour field stuff was, of course, wrapped up with ambitious notions of the sublime. The work was a grandiloquent attempt to penetrate into the final mystery of things, to uncover metaphysical secrets, comprehend the ultimate truth of the matter - life, death, tragedy and the rest, to go bravely where none had gone before. Dashper reflected a later generation who were a little nervous about such modernist claims, seeing them as hubristic overreach.

Bayly responds, as a representative of an even later generation to these warring factions. In Structural situations (red, blue yellow), he has taken three separate 1.2 m long pieces of wood and stained them with paint in the Newman/Dashper colours and placed them hard up against the gallery wall, horizontal along the floor, (another horizon line). Against the wall they hold a line of sand, positioned between wall and wood. The sand was initially level with the height of the wood but subsequently spilled out a little at each end, undoing the impeccable parallel equation. Perfection is thereby thwarted because of the indeterminate nature of sand played off against the hard edged abstract form. And yet, for all that, some of the sand held.

Again, the artist explores the perception of modernist failure. Perhaps no immutable eternal Platonic forms exist, geometric or otherwise, but the utopian impulse is not thereby negated. To think so would be to simply spit the dummy. The mission to transform society must continue, otherwise it falls foul of the critique of Habermas who sees postmodernism as a form of passivity and quietism, offering no resistance to the status quo.

Morrissey (The Smiths) sings, “There is a light that never goes out,” and this expression of optimism, from an otherwise miserablist, is embodied by Bayly in a fourth part of Structural situations, a light-box made in the exact same shape and size as the painted wood pieces, shinning on the floor as a kind of modest beacon of hope.

The title of the show itself, Ninth Wave Theory, refers specifically to a work called Study of 1850 painting by the Russian/Armenian marine painter Ivan Aivazovsky. The nautical painting depicts an image of sailors clinging to the wreck of a ship, (Raft of Medusa-like), that has survived a storm, although waves continuing to roll. A Turneresque sky is aglow with reds, yellows and blues and Bayly reproduces this scene on the wall of the gallery to become a kind of hopeful horizon. The “ninth wave theory” refers to an idea that waves grow larger in a series up to the largest or ninth wave, after which the series begins again.

Bayly is a ninth wave man, hanging in there after the crash of the biggest wave, not stupidly naïve or hankering for some modernist ideal but yet still clinging to the possibilities of a dream. His eyes are on the horizon, hopeful but not stupidly romantic, realizing that there are failures - but not yet ready to relinquish and let go of the debris. The beauty of survival conjures the image of the cowboy who rides off into a red and yellow sunset, licking his wounds, mission accomplished or perhaps not, but still in the saddle.

Or alternatively, hitchhiking improbably through the galaxy where there might be places somewhere that moderate utopian fantasies are still extant and the hostess’s knickers may, if one’s lucky, leap sideways according to the theory of indeterminacy. All is not lost, except the knickers, one hopes.

Bayly has constructed a complex set of works in this show that each cleverly interrelate and build up an engaging and sometimes humorous picture that conceptually explores where modern and postmodern can find some rapprochement.