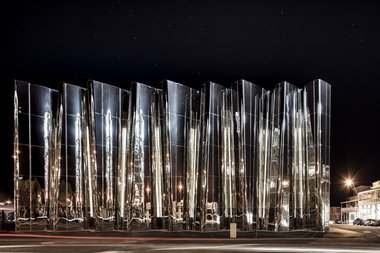 With the new architectural arrangement there is a strong sense that the Lye Centre has hijacked the Govett-Brewster, that the Govett is only a mere annex to the Lye project. This view is supported by the way Patterson has removed the double doors that were opposite the base of the Billy Apple staircase, so that the Lye Centre hogs the attention of visitors when they pass through the entrance foyer, and are forced to turn left to look up the sloping ramp towards the tilted concrete Devon Street wall slabs and high cathedral-like ceiling.

With its official opening last Saturday morning, the latest transmutation of the Govett-Brewster Art Gallery is now open for public inspection, alongside its dazzling new neighbour and partner (by virtue of sharing the same director), the Len Lye Centre. New Zealand Aotearoa’s art communities will watch Simon Rees with interest as he straddles both camps, the enthusiatic Lye experts and the contemporary art cognoscenti, while he woos a new - national and international - audience for both, attempting to attract them to Taranaki.

Resplendent in Devon Street West with its stainless steel coating, doubled floor space and strikingly rhythmic Andrew Patterson design, it is natural that the Lye Centre has a high public profile, not only through the spectacle of the new architecture, but also through the easily marketable, charismatic individuality of Lye himself, and the exuberant physicality of his work. Yet there is an argument that the role of the Govett-Brewster, as a ‘flagship’ for contemporary art, a phenomenon that is constantly changing in the breadth and complexity of its definitions and models, is far more important as a symbol for a particular way of ‘liberated’ thinking, and that the agendas for the two institutions are so different they cannot possibly overlap. If you compare a male Modernist studio-based artist like Lye with any currently active, ‘relational’ community-minded, process-oriented artist who is uninterested in lasting objects - you’ll see my point.

When it opened in 1970 the Govett-Brewster - like this new building that it has been absorbed into - was conspicuous as an example of destination architecture, a picture theatre converted into a series of galleries that would attract contemporary art pilgrims. Now however, as a centre for art debate and research - and provider of new ideas (new questions / new solutions), new sensualities, and new semiotic juxtapositions - the Govett’s significance may well have been usurped by university galleries like the Adam, St Paul Street, or Auckland City’s Artspace. These days, exciting high profile international shows, of obvious historic and social relevancy, are required to attract art punters to Taranaki if the Govett has any chance of proving it has not gone past its ‘used-by’ date.

Whatever the case, with the new architectural arrangement there is a strong sense that the Lye Centre has hijacked the Govett-Brewster, that the Govett is only a mere annex to the Lye project. This view is supported by the way Patterson has removed the double doors that were opposite the base of the Billy Apple staircase (inadvertently destroying its raison d’etre), so that the Lye Centre hogs the attention of visitors when they pass through the entrance foyer and shop, are forced to turn left, and look up the sloping ramp towards the tilted concrete Devon Street wall slabs and high cathedral-like ceiling - before moving up to the Lye Fountain exhibits.

This view of the Lye Centre ‘colonising’ the Govett-Brewster is aided by the fact that both Paul Brobbel and Simon Rees - the curators of the centrally positioned shows, Len Lye’s Jam Session, and Our Hearts of Darkness - have used large matte black walls on which to hang two dimensional works or project film. Without vibrant applied colour on the walls of one or other institution, the two shows optically merge, and most visitors would have encountered the Lye projects first. A more chromatically contrasting, ‘parallel’ and balanced presentation of both venues would have been better, so that on a visual level the spatial layout, floor plan, and wall elevation of both institutions could be celebrated, their different ambiences and emphases more appreciated.

Thinking about the intricate Terry Boon designed additions (1997) that were destroyed to construct this much bigger venue, it is tragic that the various exhibit-friendly nooks and crannies (like the layered mezzanine catwalks) for exploring visitors to discover have been lost, for despite its exhilarating exterior and high ceiling, Patterson’s mirrored building is ‘meat and potatoes’ internally, being comparatively uncomplicated. Yet in fairness it is difficult to assess the new venue only from its first presentation. It will take a couple of years for Rees and Brobbel to carefully explore the new complex’s flexibility and ability to spatially surprise the regular punters. To see if visitors can be kept guessing with changing wall positions, panel colours, innovative layouts etc.

Looking at the two collection exhibitions on display, it is a shame a spectacular overseas show wasn’t organised to pump up the changed building even further. However Paul Brobbel’s two Lye presentations work well: Four Fountains makes nifty use of projected light on four rotating (a stop/start, shunting staggering cycle) sculptures that with their stems of bending rods and sizes that vary from intimate and table-sized to massive and seemingly tubular; Jam Session, in Gallery Three, a space apparently shared by both institutions, presents a wide selection of Lye’s ‘greatest hits’ - samples of direct films, kinetic sculptures, photograms, soundtracks, drawings, paintings, and notations for kinetic sequences.

Simon Rees’ curatorial project has a clever title, Our Hearts of Darkness, deftly modifying Conrad’s novel’s title for community relevance, but the choice of works, exemplifying resistance to mono-cultural conformity, and advocacy of difference, is over ambitious in its reach - and too sweeping. Some artists like McCahon, Hotere, Clark, Shelton, Fomison and Hohaia fit in well thematically with their hard-hitting, pointed statements, while others like et al, Smither, Intra and Fraser appear strained in their rhetoric and limited conceptual efficacy, seeming shallow, mischievous and wilfully oblique in such an earnest context. Some of the latter were included at the last minute because there were technical problems with Lye’s Trilogy, yet that work (while Rees was organising his own show) should not have been included in the Govett-Brewster space in the first place.

Still, one mustn’t forget the role of NPDC, a significant partner in all of this, for a general truism would be that the local district council is far more likely to endorse the marketing of a single artist with a distinctive ‘brandable’ persona than the vagaries and abstrusities of contemporary art, even if the latter has a sizable following. Because Lye was particularly interested in his work having an emotional impact on the visitor’s body through the manipulation of their senses, a big chunk of the wider national and international art community will be attracted to his endeavours - and perhaps not those (for example) more rarefied, process driven, or ‘dematerialised’ information-based projects found in cutting-edge institutions (ostensibly) like the Govett-Brewster. If this opening show is an accurate indication of things to come, then perhaps that is a good thing, and realistic economically.

Thank you for those comments Fiona - should have picked them up also in this piece here: http://www.thebigidea.co.nz/news/columns/mark-amery-visual-arts/2015/aug/168223-cheek-by-jowl

I think it is intended to present Trilogy occasionally in its usual G-BAG site. It has been rebuilt (the motor ...

There are 2 pieces of information missing here that you have not addressed yet. 1. The Len Lye work - ...

What's the problem? New Plymouth has both the big shiny thing to attract the spectators and the nerd factory next door. It's really an architectural expression of what's been going on at the GBAG for decades. The summer road trip to see Len Lye sculpture and whatever else was on in the gallery.

The relationship between McCahon and Te Uru is an example of keeping a separation between a major artist and a public gallery, it's just that it's a bit more subtle. But when was Len Lye about subtle? He was all about being the loudest in the room.

As for the relational artists who produce ephemera, why the need for bricks and mortar and institutional re-presentations? Why not leave the exhibition spaces for people who want to exhibit?

I guess there are two other points to be made:
(1) Can the legacy of Len Lye be milked much further than what it has? Most art enthusiasts are familiar with his corpus of work. Are there many surprises left to astound the general art audience as well as the 'faithful'?
(2)The Govett-Brewster needs space for its own agenda, part of which is not only displaying stuff but initiating research and debate. But maybe other (more recent) institutions in other cities are now doing that more effectively?

Simon might be dealing with the tall wobbly stilts of tourism (right foot) and contemporary NZ art culture (left foot), which is perhaps hardly easier than the aforementioned "straddling".

"Tomorrow will be the same ... but not the same as this", is being chanted in the background. Tomorrow in New Plymouth sounds very interesting for the time being.

But also in the distance someone is always singing "climb every mountain ..."

There are 2 pieces of information missing here that you have not addressed yet.
1. The Len Lye work - trilogy or flip and twister .. the big first LL artwork that always hung on D deck in the G BAG gallery is not showing at the moment - I regard this work as one of the main large kinetic works by LL. I was looking forward to seeing it again. It cannot be shown in the new 11 milllion $ LL centre as it doesn't fit into the space currently occupied by the fountain works. If it is to be shown there will need to be design changes made, either to the G BAG D Deck or the new LL centre. It looks like the G Bag D Deck will be Trilogy's future home and not the purpose built LL centre.
2. The sponsorship by an oil and gas company and naming rights by Todd Energy of the centre has not been raised as an issue.
The debate needs to occur. How ethical is it, to walk through the named rights galleries energy foyer, sit in the energy education centre?.

I think it is intended to present Trilogy occasionally in its usual G-BAG site. It has been rebuilt (the motor was worn out) and the LLF are still tweaking its mechanics. I've also been told that the entire architectural complex can be used by either institution for thematic purposes: that it is a fluid arrangement. Time will tell.

Re the situation with Todd Energy sponsorship, gallery visitors will obviously make up their own minds. They can boycott such spaces if they wish, and put comments in the visitor book etc. Nobody is compelled to visit these display areas.

Thank you for those comments Fiona - should have picked them up also in this piece here: http://www.thebigidea.co.nz/news/columns/mark-amery-visual-arts/2015/aug/168223-cheek-by-jowl