Saying It with Flowers 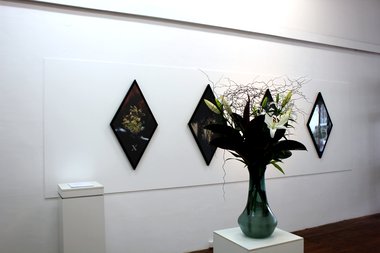 Barlow’s view of current “progress” around issues concerning Māori could be described as one of ebullient scepticism. He’s Sonny, not Sunny. And while this current work is also about memory and loss, it’s less specific than Parekowhai’s and a lot darker, both visually and conceptually. Barlow’s flowers are a mix of the real and the fake, but his chosen medium of photography – itself about replicas – is, ironically, unconcerned about the difference.

One of the better jokes of art history is the remark attributed to academic painter Paul Delaroche who exclaimed in 1839, on hearing of the new invention of photography, “From today painting is dead.” In the Famous Last Words department we have something similar here. Three or four decades ago distinguished academic Sidney Moko Mead declared there could be no such thing as contemporary Māori art. Well, down at Mangatainoka they’d say “Yeah right” to that.

Post-WWII urbanisation of Māori is a story both complex and endlessly fascinating, and the ways in which customary practice evolved culturally - the cultural always lagging behind the social (just look at what Māori achieved in the fields of literacy and farming, for instance, very early on) - is a very specific and telling chapter in the bigger story. Pakeha assumption of material, intellectual and moral superiority so jolly decently segued into an unquestioned belief in the necessity of assimilation, a policy advocated by the dominant race, from Gore Browne in the 19th century to Jack Hunn in the 20th.

A comprehensive account of Māori resistance to Pakeha “civilisation” has yet to be written. (Civilising being perhaps often well-meaning, but always ignorant). It’s still a decade or so away, present consciousness of it being pretty much confined to the area of land confiscation. But it threads through our history like dark seams of coal beneath our feet. Māori never hesitated to graft onto their own culture those elements of European culture of obvious advantage to them: but, they did the choosing and they did the grafting in their own way, an approach continuing to the present day. At least, by the dawn of the 21st century, the burden of Pakeha good intentions has largely been lifted from them, even if claims for self-determination are still more likely to be misinterpreted than not.

Just as Māori - mostly out-numbered, nearly always less powerfully armed - out-manoeuvred imperial troops in the Land Wars with their innovative trench and tunnel fortifications, and their ability to melt into the night, their survival since has often depended on such imaginative responses, and - more than mere survival - a more partnered relationship with the dominant culture has engendered a sometimes surprisingly refreshing takes on established European traditions. At first glance, for instance, Michael Parekowhai’s 2001 series of 12 photographs - The Consolation of Philosophy/Piko Nei Te Matenga (1) - looks like a standard (albeit rather pretty and over-lit) contribution to the long European vanitas tradition of still life. But these extravagant vases of flowers are not at all what they seem. Firstly, these vivid blooms turn out to be made of silk and plastic, and, secondly, the arrangements are mute memorials to members of the Māori Battalion lost in WWI, the images’ titles being places in France and Belgium, sites of battles such as Amiens and Passchendaele.

A group of these images was exhibited at Christchurch’s Jonathan Smart Gallery a year later, and a review by Justin Paton appeared in Frieze 67, May 2002. He takes up the story:

To arrange scentless, unwilting silk flowers is to commemorate stilled lives (silk is what military colours are made of). To seal those bouquets in a photograph is to make something twice stilled, twice removed. It is not just death but homelessness - the distance between body and land, an especially sacred relation for Māori - that those images mark and mourn so beautifully. The photographs are, you realize, virtual tombs, interring not bodies but absences. The exhibition is their mobile cenotaph.

The feeling of expansion and increase in one small room is amazing, like a closet opening to reveal a choir. Art is the camouflage here, and Parekowhai working under cover of those high-gloss photographic surfaces, surrounds his audience with something unprecedented - a memorial you don’t have to disengage the brain to be moved by. The harder you look at these silky bouguets, the more they bristle with generous intelligence. It’s the kind of ambush you wait and hope for.

Sonny Barlow’s Floral Dis-order seems in many ways a reprise of this work, although, unlike Parekowhai, he offers few clues as to what his artistic intentions may be. He’s part of Whanganui’s Super-Wairua Collective (2) and his involvement there may provide a few leads as to his motivation here. Barlow’s view of current “progress” around issues concerning Māori could be described as one of ebullient scepticism. He’s Sonny, not Sunny. And while this current work is also about memory and loss, it’s less specific than Parekowhai’s and a lot darker, both visually and conceptually. Barlow’s flowers are a mix of the real and the fake, but his chosen medium of photography - itself about replicas - is, ironically, unconcerned about the difference.

This apparent (and only apparent) difference is highlighted at a precise point in the exhibition where the Roman numeral-numbered sequence is interrupted/disrupted by a real vase of flowers on a plinth - VI - which, according to Space’s director, is meant to be viewed from the front (3). Only one view allowed has an echo in assimilationist policies stretching back well over a century, so this apparently attractive botanical bunch at the centre of the gallery, so easily perceived as just a decorative element of the show, is actually freighted with raw memory and irrecoverable loss.

This deliberate contrast of real flowers with photographic images of them accidentally mirrors a strategy taken at last summer’s major survey of photographer Yvonne Todd’s work at City Gallery, Wellington. One of the galleries displayed ten of the stylish gowns worn by Todd’s subjects in their portraits, themselves handily adjacent on the walls, setting up a conversation between the respective realities of real things and the realities of the same things appearing in real photographs (4). In setting up this contrast Barlow claims that what is real for one group is not always the reality for others, with the apparent seamlessness of some Treaty settlements masking significant cultural differences going unacknowledged. What looks like order is just the continuance of further dis-order.

The word claims here has some resonance. Much as putting a match to gunpowder, linking “claims” to “Māori” tends to produce a similar reaction in certain Pakeha circles, but Barlow’s claiming is of a different order. He’s claiming the right to be heard, for a start, and the right to present a quite alternative viewpoint - a view not necessarily shared by other Māori, particularly those more involved in what might be termed the “settlement business”.

As with deploying the vanitas tradition (invented to remind us of our individual mortality) to issue warnings about a race’s cultural survival, Barlow’s use of the photographic medium is not to provide some kind of window on the world. No, he freshly wields photography like a patu, brandishing it in our faces, suggesting not everything in the garden’s rosy, and, unless note is taken by everyone, these shadowy blooms he so tenderly depicts could so easily become re-fashioned into wreaths.

(1) “When our heads are bowed with woe”, a traditional lament for a fallen chief.
(2) See this writer’s piece Packing a Punch on the exhibition, The River Goblin, posted on this site 21 April 2015.
(3) Mercifully there is no “X” on the floor, as at Te Papa now, to indicate the best position for a selfie posed against an artwork.
(4) See this writer’s piece on the Todd show, Art New Zealand 153, Autumn 2015, pp 64-67.