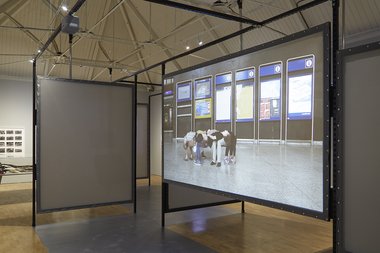 Returning to London on the train, I realise I have never thought so much about my own relationship with public space than while living here in this city of over 8.6 million. Mostly you mimic the behavior of those around you, following the etiquette of public space. You ignore your fellow commuters with a determined kind of obliviousness as you're pushed up against one another on the street, train, tube, bus. But there are moments that pull you out of your own space, and remind you that you are surrounded by millions of other walking, talking, private lives.

This is the second iteration of an annual exhibition series at Modern Art Oxford, where each exhibition acts as a kind of ‘test run’ or precursor to some of the ideas likely to emerge over the following year of programming. This year’s exhibition focuses on the public realm and our individual engagement and collective occupation - physical, digital and conceptual - of that space. Wandering the streets of Oxford it struck me that, here, the notion of public space is a particularly interesting one; with much of the city hidden from public eyes behind great stone walls, locked doors and gates, the preserve of those few who walk the hallowed halls and grounds of the university. At one point in Oxford’s history a wall was even built to keep council estate residents out of a wealthy development. The Cuttlestowe Walls were only demolished in 1959, the former location now only evidenced by a historic blue plaque.

Test Run: Performance in Public features both older and more contemporary works, with a programme of live performance scheduled throughout the exhibition.

Jeremy Deller’s The Battle of Orgreave (2001) is the first piece encountered upon entering the gallery, set apart on its own in a darkened room on the ground floor. This film documents Deller’s project to produce a reenactment of the 1984 clash between police and striking miners in the town of Orgeave in South Yorkshire. The sheer complexity of coordinating eight hundred people, including historical re-enactors, former miners and policemen, many of whom had been involved in the original conflict, makes this piece of work astonishing. What’s more surprising is the level of commitment and enthusiasm of those participating, with some miners even taking roles as police officers, playing out specific moments from the conflict from an entirely different perspective.

I couldn’t help but wonder what the reaction would be to a similar project in Aotearoa. How would the New Zealand public respond to a call to reenact an event in our recent history, such as the 1951 waterfront dispute or even the 1981 Springbok rugby tour protests?

Upstairs, the rest of the exhibition occupies a relatively small space given the number of artists represented. But it works despite, or perhaps because of, this close proximity that sees projections, photographs, and vitrines jostling for attention. A series of metal structures define the space, functioning as both dividing walls and projector screens.

The work of New Zealand-born, Berlin-based artist Alicia Frankovich is projected onto one of these screens. Sisyphus Now (2014) was originally performed as part of Le Mouvement: Performing the City in Biel/Bienne, a city on the language boundary between the French and German speaking parts of Switzerland. Set in the Biel/Bienne train station, six performers act out gestures of greeting and farewell, frantically embracing and kissing one another. They collapse backward, bent in half, each resting on the knees of another in a tight circle. One performer begins to laugh, and then they are all laughing, the human structure jiggling and shaking until it eventually collapses. They walk hurriedly back and forth, slinging bags over shoulders, turning quickly on heels. They point fingers, raise and cross arms as if directing traffic, or people. These movements mimic gestures from the everyday but presented here they are abstracted, drawing attention to the performative nature of our own lives, where each gesture is part of a unique choreography.

Performance work is predominantly defined by its ephemeral nature, its relationship to a particular time and place often inherent in its making, with the original experience witnessed by only a few. As is the case with many of the works in this exhibition, Sisyphus Now is presented through video documentation. Various onlookers and a rush of commuters no doubt surround the performers, but in the film we see here the screen is relatively empty of other people; for the most part the six figures are alone on screen. People pass in and out of shot to check timetables or walk with heads held high, eyes straight ahead, determined to ignore the spectacle. A woman with a child in tow barely looks up to acknowledge what is happening just in front of her, but the child stops and looks around at the performers and then one imagines, at the faces of those off screen who are watching, trying to gauge what is happening, and not yet attuned to the etiquette of public space.

The exhibition also features documentation of British propmaker, artist and performer Bruce Lacey‘s performance work The Laceys at Home (1972), where his entire family set up a room at the Serpentine Gallery in London, conducting everyday domestic activities in full view of an audience. This work is shown on a small old-fashioned television, set at a low height, so that you almost need to bend over to peer in at the black and white figures moving silently around on screen. Described by Lacey as ‘live sculpture or living theatre’, this intimate portrait of family activity actively dismantles the barrier between private and public realms.

Lacey further explores his fascination with the dynamics and conventions of daily experience in The Lacey Rituals (1973), where each family member took it in turn to film and perform a daily ritual. Watching a clip from the film, you see Lacey’s young daughter trying to navigate the line between natural and performed behaviour as she carries out her daily routine of making breakfast, asking the camera, “should I really pour the milk?”

I’m particularly drawn to those works in the exhibition that were produced by women artists in the 1970s, when performance was increasingly emerging as a form of protest in the UK alongside the Women’s Liberation Movement. As a reaction against the gendered constraints placed upon women by society, the female body is often at the centre of these works, presented as a site of contestation. In Rose English‘s Quadrille (1975), six women dressed as horses dance around an outdoor area marked out as an arena. Wearing aprons, leather harnesses, horse tails and hoof high heels, the women move around the arena in a series of gestures reminiscent of dressage, lifting their legs high, turning one way and then another in the circular space of the arena. Their bodies are restricted, their movements heavy, slow, made ungainly by the hoof heels. The work is presented here by video and photographic documentation, a vitrine holding the aprons, harnesses, tails and heels.

English artist and photographer Gillian Wearing has described her working process as a form of ‘editing life’, examining individual and collective experience. Wearing creates portraits that illustrate the chasm between our innermost private thoughts and that which we present to the world, and the attempted transgression of these respective realms. Dancing in Peckham (1994) plays on an old television hanging from the ceiling in the gallery. In this twenty-five minute video we watch the artist dancing exuberantly in the middle of a shopping centre in South London. There is no music playing; the only soundtrack comes from the people in the shopping mall, from whom Wearing’s activity solicits indifference, or momentary curiosity before they continue, caught up in their own private lives.

The works in this exhibition are often intrinsically humorous, but they are also provocative and overtly political. One need only look at Pussy Riot or Pyotr Pavlensky to see how performance continues to act as a powerful, sometimes dangerous, form of protest, offering a platform for provoking social and political dialogue. The cover of the exhibition guide asks ‘what can you do in public?’ The answer I suppose is anything, but the response to and implications of this action is where questions of conformity and conflict arise.

Returning to London on the train, I realise I have never thought so much about my own relationship with public space than while living here in this city of over 8.6 million. Mostly you mimic the behavior of those around you, following the etiquette of public space. You ignore your fellow commuters with a determined kind of obliviousness as you’re pushed up against one another on the street, train, tube, bus. But there are moments that pull you out of your own space, and remind you that you are surrounded by millions of other walking, talking, private lives. A friend recently saw a middle-aged man and woman, who had the outward appearance of strangers, engaging in some kind of silent role-play on the underground. He watched as the woman took a seat beside the man, and moments later gently placed her hand on his leg. He surreptitiously took a photo of the pair. Their eyes stare straight ahead, their faces blank and expressionless but for a small trace of a smile at the corner of the man’s mouth. Her hand rests on his thigh and his sits stiffly on top, the photograph capturing a perfect moment of public transgression and personal connection.