Braunias Friezes (on Paper and Wall) in Christchurch 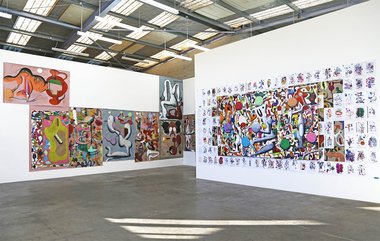 Anti-Groovy looks like a body of work in which Braunias has been more than pleased to expose the processes of making and something of the challenges of the decisions of doing so; lines tail off or are in the process of being erased, worked over or tightened, as they seek to gain control of the negative spaces of the surfaces that they define and occupy. Braunias' art serves as a reminder that everything is a work in progress; an act of exploration and discovery.

Featuring works on paper, drawings, a limited-edition publication, and work completed in situ at the Jonathan Smart Gallery, Mark Braunias’ Anti-Groovy feels like full and frank disclosure. An admission and a celebration about making works of art and the limitless pleasures of modernism - even in the second decade of the 21st century. Braunias proves that he can deliver such sentiment with disarming confidence. There is a surprising and welcome intimacy to all the works in Anti-Groovy, offering the gallery visitor a closer look at the gestures, marks and evidence of the artist at work.

The estimated 150-170 works that make up the exhibition all represent evidence that Braunias is a compulsive thinker and maker, continually reconsidering and refining his imagery, processes and means of production. There is a robust confidence as well as an element of excess and indulgence at work in this exhibition that is entirely pleasurable. In Anti-Groovy, Braunias’ trademark biomorphic forms and figures exist within a labyrinth of images, in a constant process of reinventing themselves in a multitude of aesthetic and philosophical punchlines.

It is a curious and intoxicating brew - evidence of a mad-cap looney-tune genius and a refined orchestration by an old-master dealing to colour and form. Anti-Groovy looks like a body of work in which Braunias has been more than pleased to expose the processes of making and something of the challenges of the decisions of doing so; lines tail off or are in the process of being erased, worked over or tightened, as they seek to gain control of the negative spaces of the surfaces that they define and occupy. Braunias’ art serves as a reminder that everything is a work in progress; an act of exploration and discovery.

Anti-Groovy is just that, an acknowledgment of the skill and gravitas of the artist as serious taskmaster - making work that is outside popular conceptions of simply having a good time - even if that is an inescapable element of taking in this show. Certainly, this sense of reflection and drawing attention to the seriousness and joy of making art seems fundamental to a work like The Twelve Apostles. Largely completed on the walls of the Buchan Street gallery, a frieze of holy figures form a queue and semi-circle over three adjoining walls. Their procession begins on large sheets of paper and then, almost without noticing, becomes part of the surface of the wall itself. Like all Braunias‘ figures and forms, The Twelve Apostles are similarly in a state of evolution, seeming to literally step off the surface of the picture plane into the reality of the gallery space.

These Apostles form a kind of impromptu disorderly parade, existing in a state of being half-formed and still forming, and certainly with little evidence of control over their own will. That clearly resides in the artist’s hand. All Apostles are heading in the same direction: to implicit freedom from the artist’s pen and paper, into a ‘promised land’ of the real world. It feels like a linear narrative about destination and fulfilment, yet equally it undermines such certainties in the weirdness and chaos of its detail. Negative spaces on the gallery wall become positive, figures tumble ungainly towards one another and space is pushed forward from the surface of the wall. With a deceptive lightness of touch, The Twelve Apostles gets to the core of the promises and deceptions of the experience of art.

And then there is that painting, Anti-Groovy. Who once said that the problem with New Zealand painting was the predominance of black in the work of far too many of our artists? Too much angst and gloom? In its contrasting tonality and simplification of forms, Anti-Groovy could be the unwanted mutant off-spring of Colin McCahon’s Angels and Bed (1978). Yet, although Braunias’ painting may have something of the manners of McCahon’s series, his intentions seem closer to graphic artist Basil Wolverton as the thinking person’s mad-scientist. Indeed, this exhibition has the look and feel of a science-fiction laboratory in which all the test tubes and experiments have been ran-sacked, lying strewn on the floor, coming to life again in new and unanticipated forms and guises - knowable yet unfamiliar and perplexing, and surprising and challenging in the most sincere and serious of all possible ways.