The Anxieties of Imagined Surveillance 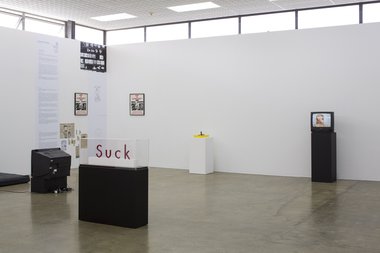 'Imaginary Audience Scale' is Misal Adnan Yildiz's title, the Imaginary Audience Scale being a psychological test devised to evaluate the degree of self-consciousness an individual has within a community (referring to the mental development of adolescents), and how much they believe they are being watched by peers, strangers and family. It is not about reality but delusional fantasy.

What is Vogue? It is knowing how; knowing who; knowing when.
Martha Rosler.

This exhibition is a continuation of the Billy Apple® show, Suck, but with nine other artists (many from the seventies) now added to radically change the exhibition’s inflection. Imaginary Audience Scale is Misal Adnan Yildiz’s title, the Imaginary Audience Scale being a psychological test devised to evaluate the degree of self-consciousness an individual has within a community (referring to the mental development of adolescents), and how much they believe they are being watched by peers, strangers and family. It is not about reality but delusional fantasy.

This is a very amusing heading for an art show, especially as it pertains to the art community (or loose cluster of overlapping art communities), implying there is a handful of alleged leaders (or ‘gatekeepers’) that guide a group ethos or various intellectual trends, and then there are also the impressionable, highly self-conscious, followers - anxious about their taste and how it is perceived.

It is even funnier still when you look at Yildiz’s subtitle for this show in its free, twenty page catalogue: a sceptical approach to exhibition making. Where might such scepticism lie: in what direction for exhibition making?

Maybe this take on an ‘imaginary audienced’ artworld is excessively reductive - possibly a variation of Pierre Bourdieu‘s notion of ‘distinction’ and the social formation of bourgeois taste, developed through the appropriate decoding of art signifiers acquired through conformity of class values and attendant education. All this as subject matter for an art show and its construction. Or is Yildiz just laying his bets both ways, using two parallel titles (one sincere, one ironic)?

The most obvious reference to a social matrix is the wall drawing by Stephen Willats, with its dense grid of floating squares and multi-vectored linking arrows. Willats’ practice has a lot in common with that of the Australian Peter Tyndall, another artist preoccupied with drawing grids to represent the sociology of the art world.

The scale of the community you and I participate in is alluded to in the other wall drawing within this show, a famous work by Lawrence Weiner, AS FAR AS THE EYE CAN SEE. It’s outside the back of the Artspace premises, a work that in this context tells you that your sense of being a small fish in a sea of inter-connected artlovers is absolutely right. And that your taste can be watched, even long distance - especially if you or others discuss it on a blog.

So, thinking about self awareness within communities, much of this presentation is also about sexual inclination. There are the Apple works - now repositioned, with an added bronze banana - and there is the mischievous, anti-conceptualist mockery of the 1974 video by Natalia L.L.. The women here taunt the easily shockable by ‘fellating’ bananas, hotdogs and pretzels, as well as teasing priapic hetero male viewers’ infatuation with the mental, as art cognoscenti.

Yoko Ono’s group of friends having their bums videoed is not about desire at all but more about matter-of-factness and the prosaic, while Martha Rosler‘s excoriating attack on Vogue magazine fits in tightly with Yildiz’s theme, the sociology of fashion consumption (the need to conform) being an apt parallel to adolescent mores.

The photographs of John Miller document a series of public protests against racism, led by the Polynesian Panther Party in New Lynn in the early seventies. The varieties of racism cited are quite specific, especially those of subtle exclusion. One placard has the caption End Police Racism Against Polynesians altered to End Polite Racism Against Polynesians. Two of Miller’s images are about anger caused by the closure of a local dance hall used by young people, about having something of great social value that was then taken away.

Art and Language (via its Australian member Terry Smith) re-present a set of works from the mid sentries shown in Auckland Art Gallery, that were censored at the time by the then Mayor, Sir Dove-Meyer Robinson. Featuring newspaper cuttings and posters referring to the former Australian Governor General (John Kerr), the former New Zealand Prime Minister (Robert Muldoon), and the former Prime Minister of Australia (Malcolm Fraser), their nicknames on the posters - Cur, Piggy and Prefect - were ordered to be blacked out, even though those names made up the publicised title of the exhibition. The order was motivated not by pragmatics but by a need to be publically seen to be protecting the exalted status of politicians.

The pages of Len Lye’s early notebooks reveal investigations into various Gaudier-Brzeska sculptures discovered in museums. Lye’s drawings and commentary explore the methodology of this pioneer French modernist, as well as various tribal exhibits from Samoa, New Guinea and Aotearoa. In this show we see his research interests as methodically structured conceptually, like related elements in a family that he is now a part of.

Bruce Barber’s documentation of the burial of five urine samples (his own) on Rangitoto in 1972, accompanied by the setting in concrete of a plaque stating its presence (Urine Dispersal Stasis), is uncharacteristically funny, a unintended lampooning (piss take) of plaques bearing pompous language. This is presented as a nihilistic gesture (as if from a naughty boy) possibly attacking scientism - but packaged as mythmaking. Barber’s contribution is probably not meant to be amusing (it lacks irony), but has been contaminated by the irreverence of the Natalia L.L. video in the adjacent room.

Turkish artist, Ayşe Erkmen, completes the show with a fascinating contribution, a video of an expert coffee ground reader, who examines both the inner sides of the enquirer’s small cup and the grounds tipped onto the centre of its delicate white saucer. He chats in his library with the artist/subject about the images he detects in the wet brown sludge, images depicting people she is likely to meet on an up and coming journey, and the city she is visiting, Auckland. The point of the work’s inclusion seems to be the cordial relationship between the visitor and the intellectual/fortune teller, especially the way he coaxes snippets of information out of her that he can build his speculations around - so that he looks prescient.

This is a clever, thoughtful - but also slyly humorous - show that needs several visits, so that relationships between the varied contributions gradually become manifest. A surprising extension of Suck.