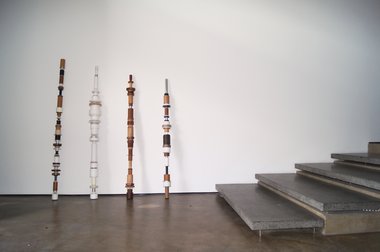 In this Bath St. show we see Anton Parsons employ plastic, wooden and metal bands with different thicknesses and diameters, using this idea to make two sorts of work: one long and leaning against the wall at an angle; the other short and hung firmly fastened - like vertical light fittings.

In this country one can discover some hybridic descendents of two unusual sculptors of fifty years ago: Andre Cadere and his portable banded poles (early seventies) and the very different, leaning, painted planks of John McCracken (mid sixties). From them there is a link to Peter Robinson, Anton Parsons, and to a lesser degree, Natalie Guy - with their use of vertically leaning stems.

Robinson of course is well known for his cut-out, modular felt rings on long rods, but in this Bath St. show we see Anton Parsons employ plastic, wooden and metal bands with different thicknesses and diameters, using this idea to make two sorts of work: one long and leaning against the wall at an angle; the other short and hung firmly fastened - like vertical light fittings.

Parsons’ contribution here has something in common with that of Matt Henry in that the six shorter works play on art deliberately looking like furniture or office accessories. Their overt lack of functionality is highly ambiguous interpretatively. You can perceive them as either amusingly dumb (a variety of whimsical but cretinous nonsense to add to the decor), or smart (a form of sophisticated abstraction).

For his ‘drop down’ discs Parsons exploits a range of textures, surfaces, edges, translucencies and sizes. They are very inventive and beguiling, and held in position (as a sequence) by their rigid vertical core, effortlessly repay close scrutiny.

Chiara Corbelletto‘s six bent polyprophene wall reliefs impress with the tension from their unfolding but restrained, cut-out, geometric forms. There is a suggestion of process-driven, mathematical continuums - all held together with tiny plastic bolts. These springy grey and blue silhouettes, a hybrid of botanical or anatomical protuberances and industrial robotics, allude to the morphologies of cut sheet-metal while clearly being soft. The contours of their carefully considered cut-out hole shapes provide dynamic negative tensions while the positive elements double as an exoskeletal armature.

While we find here a great selection of works by both Parsons and Corbelletto, Purvis and Osmond in comparison seem under-represented. They lack the quantity of work to sufficiently build up steam to compete with the other two artists. And although it might be argued that one special item from a single individual can blow away a plethora of works from another, here the imbalance affects your reading of the whole group.

Kevin Osmond‘s three works present circular panels of MDF with fine lines cut in with a fine router. The spiralling, meandering, fingerprint-like formations have thicker lines on the outer edges and get thinner towards the centre. Coloured in with metallic paints, they look (mistakenly) like a variation of sgraffito, as if the bottom layer were applied first. Of the three, Inner Space 3 is the most successful, its complex wandering line matched by minimal colour variations. This way the linear textures and vectors are accentuated but not confused. Another work, more zigzagging than spiralling, has an angular, spiky ambience like a jagged traversing wave moving horizontally along a wire.

These works of Osmond’s, as flatly carved reliefs, are quite solid with mass. They are very different from the rest of the show, and don’t really fit in - being dark and hefty, not spindly or skeletal.