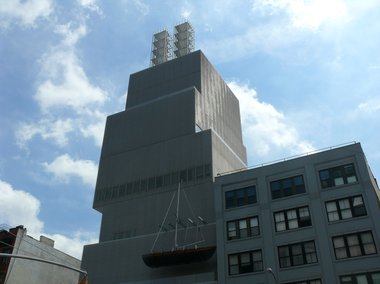 As the cost of living in Brooklyn climbs, more people are pushed out of the neighbourhoods experiencing the greatest rent-hikes (like Bushwick and Williamsburg), and seek rents they can afford in less affluent districts, like Bed-Stuy. Although these new arrivals might be moving because they were priced out, if they are white Americans, they are thirteen times as likely to be able to pay their rent (and as rent rises, keep paying it), than their black neighbours. So who do you think the landlord will be leasing to?

Every three years, New York City’s New Museum hosts an exhibition dedicated to early career artists. The Triennial, self-characterised as having a “predictive, rather than retrospective, model” invites artists to introduce themselves; this year’s exhibition, entitled Surround Audience, is themed around the navigation of identity in the one-click-away contemporary world.

The Museum opens at 11 am - around the same time that the Bowery Mission, a few doors down, opens its soup kitchen, and the hungry line up along the pavement. The queue is not visible once you step inside the Museum’s beautiful glass and metal walls, where through the grace of public and private funding, the New Museum is able provide its (paying) visitors with access to the work of fifty-one young artists. Housed in a museum, their artworks are archived, and protected from the hunger of history by the power of curatorial sanction. History, effectively, is caged, and ready for the inspection of those privileged with the money and time to gallery-hop in one of the most expensive cities in the world.

One artwork, however, does take you back into the streets. Eventually they introduced me to the people i immediately recognised as those who would take me out anyway is a performance piece by Luke Willis Thompson (Auckland), winner of the 2014 Walters Prize. Eventually takes the audience on a choreographed walk, or “pursuit”, following a performer through New York City, to an unknown destination. The performance runs twice a day, and, unlike entrance to the show proper, is free, although one needs to have at least one pass on a subway card.

I attended the performance on a Thursday morning, with two friends. “Just to let you know,” warned the Museum staff, “the performance could take up to an hour, and you might end up anywhere - in Brooklyn, or the Bronx.” Undeterred, we followed the security guard’s direction to step outside, and join the performer who was waiting there. She paid us no attention, but at precisely 11.30, she started walking towards the train. As we followed, she didn’t look to the left, or to the right - she acted like we weren’t there at all.

At first, we followed the performer as closely as we could, and inspected the splattered tiles of the subway stop with grave attention. We watched the performer for clues as to how we should behave. One of my companions tried to speak to her. She turned away.

The train took us to Myrtle-Broadway, which was my old stop when I lived in Bed-Stuy, Brooklyn. The Myrtle-Broadway station is above a particularly busy traffic junction, with a ‘Mr. Kiwi’ hawking cheap vegetables at its apex, and a Popeye’s restaurant on the other side, wafting the smell of fried chicken across the street. The cars drive fast. Last year in June there was a fatal hit and run at the junction, and a flashing yellow police sign lit up the street, asking for information.

Despite the busyness of the junction, the pace is slower than in the Bowery. The performer moved deftly through the crowd, turning on her heel to maneuver around an enormous woman dressed in turquoise and gold, with a blonde weave trailing down her back, like an urban mermaid, glued to her phone. A train roared above, and two women holding sodas argued in front of a tiny cherry tree, flowering pink, and much too short to provide any shade. It was getting hot. A man in a baseball cap leaned on a wall outside a laundromat, and called out “Hola Mami. ¿Como estas?” with a wink.

We started to experiment with our assumed role, now trailing the performer, now keeping an eye on her from the other side of the street. After all, there were no instructions, so perhaps we should be playful, we thought. Then the performer crossed in front of us, and we followed her into a supermarket car park. Outside the supermarket entrance, beside an enormous stack of dried goods, she turned to face us. “The performance is finished. Thank you,” she said, and disappeared into the supermarket.

After being invited to contribute to the Triennial, Thompson spent three months living in Brooklyn, preparing the performance. The piece he has created lets the city do the talking: even the various routes are collaborations with the performers, each of whom is a New York resident. But the directorial choices Thompson does make visible are crucial in directing the audience’s gaze. The woman we followed through Bed-Stuy was black, as are the other performers in Eventually. Our audience of three, that Thursday, was white, and we ‘pursued’ her through a neighbourhood that is traditionally known as the heart of black Brooklyn.

When I moved into my first home Bed-Stuy in early 2014, I heard a teenager whisper to another, as I passed, “There’s a white girl in your building?” Her voice was incredulous, but by the time I left the neighbourhood, nine months later, I had lived in two households of white people, and the changes in the makeup of the streets was noticeable. Since then, our neighbour, P, who lived with her eight year old son in the apartment under ours, has been evicted, after failing to pay her rent for six months. Perhaps the people who move in next will be another family of colour, people from the neighbourhood. But perhaps not - as the cost of living in Brooklyn climbs, more people are pushed out of the neighbourhoods experiencing the greatest rent-hikes (like Bushwick and Williamsburg), and seek rents they can afford in less affluent districts, like Bed-Stuy. Although these new arrivals might be moving because they were priced out, if they are white Americans, they are thirteen times as likely to be able to pay their rent (and as rent rises, keep paying it), than their black neighbours. So who do you think the landlord will be leasing to?

Commentators have described Thompson’s piece as confronting “tricky issues,” and “needling.” I would argue that Eventually itself asks very little of the audience - just to wait, to walk, to follow. But even asking a little, in New York City, means asking a lot. There are three inescapable New York conversations: race, money, and real estate. In embracing his work’s locale, Thompson cannot avoid these topics, and does not try to. Instead, he provides a route. And this route illustrates all too clearly that race, money and real-estate too often mean the same thing: they mean walking a path determined by somebody else, speaking without being listened to, and being looked at without being seen. This is what it is to live inside history: to be swallowed alive. This is the walk of the Invisible Man. Eventually asks that you leave your peanuts at the gallery door, and walk with him.