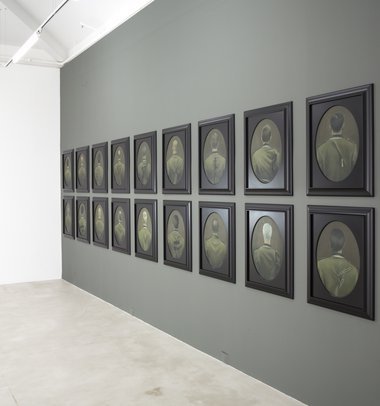 Knowing the uniform source affects your interpretation of these portraits….or does it? Is a person's character automatically tainted because they are wearing a Nazi uniform? If they were in New Zealand uniforms would the attendant philosophical premises drastically alter, or is the private interiority of the contemplative individual (its comparative inaccessibility) versus the public exteriority of an identifiable uniform the issue that is really at stake?

In this, Heather Straka‘s first exhibition at Trish Clark’s gallery, she presents two related installations of ‘realistic’ oil painted portraits: one (The Asian) stacked vertically on a high grey wall; the other (Somebodies Eyes) horizontally aligned. Both have small white rooms that, serving as adjacent annexes, display key supplementary material - and as they are on opposite sides of the building, there is an appealing symmetry.

The Asian (2009) was first shown in Dunedin in 2010 with sixty images, and then presented in Pakuranga at Te Tuhi a year later. Here in Clark’s space, in conjunction with Somebodies Eyes on the opposite wall, it looks very different from both earlier iterations. This time the full set of portraits of a Shanghai poster girl (now fifty-one copies [not fifty-nine as initially] made by Chinese artisans in the village of Dafen and painted from an earlier work of Straka’s based on a poster) is not displayed in its entirety, only thirty.  That ‘earlier work’ is presented next door with the remainder, in an open crate.

The installation of two rows of portraits (painted from behind) that make up Somebodies Eyes 1-20 (2015), show a group of men and women dressed in overlarge military tunics, apparently Nazi in origin. Like The Asian the project seems to reference the individual’s relationship to the larger group, how they can be perceived in isolation and how their own thinking can be free of stereotypical limitations.

Knowing the uniform source affects your interpretation of these portraits….or does it? Is a person’s character automatically tainted because they are wearing a Nazi uniform? If they were in New Zealand uniforms would the attendant philosophical premises drastically alter, or is the private interiority of the contemplative individual (its comparative inaccessibility) versus the public exteriority of an identifiable uniform the issue that is really at stake?

Also, because their backs are towards us on this long wall, it seems that Straka is presenting these soldiers as suitable targets for an attack? She is teasing…or is she not? If we shot at them while they were facing us, would that be any less cowardly?

Frontally in our imaginations, as opposed to from the back, these soldiers look better dressed than how we see them here. The rear views reveal that the baggy serge tunic has - in most of the paintings - had its slack (sagging around the shoulder blades) folded under and hidden through a system of fastened (traversing) duct tape strips, clothes pegs, safety pins, sewing pins and clamped bulldog clips, and so these ‘ostensibly hidden’ items become symbols for vanity and perhaps social control. Through methodical repetition they take on a loaded, overtly metaphorical, presence in this show, akin somewhat to Dutch still life.

We are seeing here a type of painting that links up to ‘realistic’ painting’s own history, an updated model, a very distant cousin to say Jude Rae’s still lifes featuring gas cylinders and fire extinguishers. As individual works Somebodies Eyes are not nearly as interesting solo as when seen collectively in a group. This is because of what they are wearing (the repeated khaki format) and the fact they are meticulously installed in a grid formation, like a platoon.

The last aspect of this show to think about is its title which is so strange because of its seemingly poor punctuation. Should Somebodies Eyes really be Somebodies’ Eyes? The title also suggests Some Bodies, Somebodies and Eyes, Is, Ayes; connecting with issues of corporeality, grouping, character, looking, and self affirmation - all topics conjured up in the twenty or so images of soldiers’ backs, and accentuated by the constantly reoccurring pegs, clips, tape and pins which provide a clever and enigmatic trope. 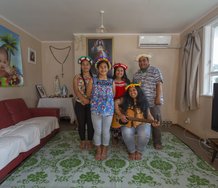