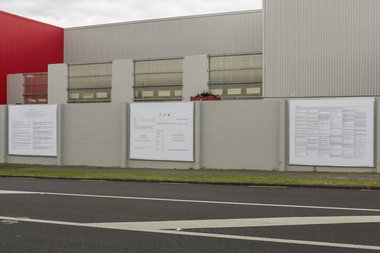 I must admit I initially thought that Roberts was a community conscious dietary fanatic who was trying to reach a larger audience in Pakuranga and get them to choose what they eat with more care, to pick more sensible foods. However on second glance it seems she is smirking at popular food and healthcare writers like Michael Pollan and Dr Joel Fuhrman. These she seems to regard as extremists because they are over-obsessed with purity in what we consume.

Bryn Roberts
Why Can’t We Eat the Sun?

With these three Reeves Rd billboards, Bryn Roberts, the publisher of the Auckland experimental Auckland magazine ISON, presents a suite of complex texts that are a bit like over-intricate concrete poetry with their shapely lists, overlaid grids and very large outlines of transparently lettered words. They are made to be examined up close, really close, and because there is so little colour, they don’t even attempt to entice you over from the other side of the street. In fact with their indifference to sensuality, they are a little like giant colouring-in books that wait for you to bring over a jar of water, a brush and some cakes of paint - and go crazy inside the whopper shapes.

Apart from the big hollow words which say YOUR BODY / FLOOD / WITH NUTRIENTS, you can’t really tell from the far side of the street that these elegantly organised configurations are all about healthy diet, calories, trace elements, and recommended (or scorned) varieties of food. The information has to be sifted through quite carefully, especially if you want to decide if the presenter is an extremely earnest nutritionist, or some smart arse taking the Mickey.

I must admit I initially thought that Roberts was a community conscious dietary fanatic who was trying to reach a larger audience in Pakuranga and get them to choose what they eat with more care, to pick more sensible foods. However on second glance it seems she is smirking at popular food and healthcare writers like Michael Pollan (who provides the title) and Dr Joel Fuhrman (who provides the detail). These she seems to regard as extremists because they are over-obsessed with purity in what we consume.

However it is not clearly obvious that Roberts is motivated by satire, and certainly most passersby will read these hoardings with utter seriousness. We are often bombarded with such explicatory material and almost all of it is dead straight - not remotely humorous. Maybe it is only the language and befuddling methods of marketing Roberts is having a go at - or their faddishness and cultishness - and not the desire to encourage sensible eating?

So looking at a broader issue, can these three large panels really be tongue-in-cheek? The seventies literary theorist Wayne Booth argues that irony can never be self evident, that it requires carefully devised clues provided by the artist or author to tell us when not to accept a statement at face value (1).

Then after you’ve realised that something peculiar is happening - that there is a reference being made to something beyond what is in front of you - how do you reorient your interpretation? Irony does not of necessity involve ridicule. Quotation that seems like caricature is often not motivated by scorn but can have affection mixed in, not critique. Many discussions of the Pop art images of Lichtenstein and Warhol for example explore this mixture, that quoting or replicating images of consumer items can mean an affectionate fascination with the marketplace or aspects of art history, and not an attack on those processes. On this subject, theorist Linda Hutcheon for instance distinguishes between parodic satire and satiric parody (2): the former being scornful, latter being respectful, perhaps playful and non-judgemental.

With Roberts the obsessive density of her diminutive text makes it hard to figure out the nuances of her intention, if there is an inherent pattern (or motivational logic) driving the design. The first panel on the left espouses Intermittent Fasting, with a series of questions and answers in small print. The middle one has three coloured images of stomachs and basically is about salads as ‘the main dish’, while the third hoarding on the right deals with Phytotherapy, focusing on the natural nutrients in plants.

Mixed in with the overloaded bombarding of information are curious little formulae like H=N/C (Health=Nutrients/Calories) that make the project seem like a paper in mathematical research. It is a puzzling endeavour for sure, one that could be taken as a form of contemporary dada geared to generate effect and not articulate argument. A form of mischievous nihilism even, planned to provoke any response and spark off conversation.