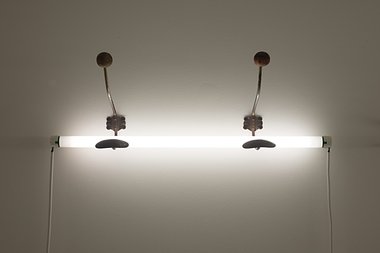 Because Culbert spends a large part of his life living in France, and because the exhibition blurb has a prominent quotation from Ian Wedde discussing Culbert's enthusiasm for Duchamp, there is a suggestion that Culbert's use of coat hooks alludes to Duchamp's 1917 ‘coat hook work' Trébuchet (Trap), and that there is more going on than just Culbert playing around with formal variations to be enclosed in stark illumination.

In this, the first solo show by Bill Culbert for Hopkinson Mossman since Crockford closed, we see two light installations in the two adjacent galleries, each one consisting of a traversing, head-high line of illuminated forms, joined together as linked up, but discrete, components. As is well known now in terms of the Culbert ‘brand’, a large percentage of those components are fluorescent tubes.

In the smaller Gallery One we find Lightline, a row of such tubes held high glowing on three walls, resting horizontally on coat hooks. These coat hooks are of several types (with knobs, loops, or curved bars) - sometimes painted, sometimes just metal - varying in number (2 - 5) according to the length of tube they are holding aloft.

And because Culbert spends a large part of his life living in France, and because the exhibition blurb has a prominent quotation from Ian Wedde discussing Culbert’s enthusiasm for Duchamp, there is a suggestion that Culbert’s use of coat hooks alludes to Duchamp’s 1917 ‘coat hook work’ Trébuchet (Trap), and that there is more going on than just Culbert playing around with formal variations to be enclosed in stark illumination. Beside of the obvious link to Readymades, there seems to be punning about the ‘coating’ properties of light, its interaction as ‘coverer’ with form.

Also, the rows of hooks are reminiscent of those found in old fashioned Edwardian cloak rooms, those dark and gloomy alcoves with dank walls outside lavatories, but now (in Culbert’s model - with a slightly comical assortment of hanging devices) transformed into hosting a suspended, piercingly bright, line.

The other work, Straits, features a sculptural form Culbert has been exploring since 1990, where a row of empty oil containers is pierced horizontally by a glowing fluorescent tube so that the colours of the translucent plastic forms can be showcased on a wall. As with Lightline, there are ten discrete works, here with five squat bottles each, their colours selected from black, blue, red, ochre, orange, cream and grey options. Because there are no greens, purples, browns or whites, there is an emphasis on hot and sometimes harsh complementary combinations, works composed according to contrasting chroma, tone or bottle alignment.

These bottles appear to be initially clear or white but stained by coloured dye within the liquid oil. Or else the dye has stained the translucent plastic previously to their being filled up. The thin colour on their insides is streaky and tactile, at times reminiscent of vertical brush marks, while many containers have a pale vertical line along one seam and an uncoloured circle on the upper outer surface of their screw cap. Often the handles have a darker tone, due to the added criss-cross texture on their grip, and we can see coloured reflections on the ridged surfaces of adjacent bottles - neighbourly chromatic crossovers, as it were.

Some might argue that perhaps Culbert has made too many of these coloured bottle/fluorescent tube works, while others would claim he seems to be still discovering qualities that excite him and which he can develop. Like say, Walters’ koru paintings (at the end of his career) or Albrecht’s later ‘hemisphere’ paintings, there is an area of debate about whether an idea stops being interesting through over-exposure or energy-drain, reaching a definite ‘use by ‘date - or if newly discovered nuances that an artist chooses to accentuate can revitalise a series, and pull back (reel in) an audience who may have moved elsewhere.