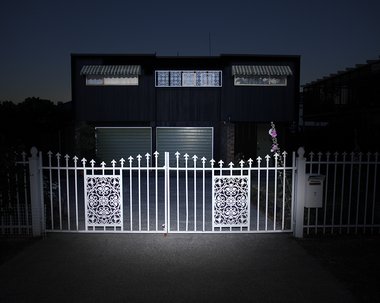 The attempt to depict night in Western art has an interesting history. It emerges in the 14th century with Giotto's generation taking the first, faltering steps towards something we call realism. The subject matter was wholly religious though, and telling nativity stories called for caves, stables and shepherds in the fields by night. Initially, the foregrounds were lit as if by day while the skies grappled with varying degrees of sour, dark blues. It took another hundred and fifty years for artistic observation and technique to advance.

Recent photographs by Greta Anderson
Day for night (stills for The Members, a film about a benign cult located west of a city in NZ.)

By its unique nature the medium of photography has an intimate relationship with light. Recent work by photographers such as Darren Glass, Andrew Beck and perhaps Joyce Campbell has made something of a virtue of this connection. And while a convincing case could be made to add Greta Anderson to this list, it would be fairer to say she was plumbing the depths of darkness. For anyone following her work it’s clear this focus forms only a small part of her oeuvre, but it’s been of a recent, more focused interest for her, and is the unifying context for this exhibition of three sets of three prints.

Her artist statement is unusually pertinent: “The Members is a film never made about a fictional cult based on my own experiences as a child. I spent from age 9-15 living on a west Auckland commune. In this series the characters from my memory and imagination use everyday objects and domestic animals as symbols for bigger concepts. The dairy cow/bull becomes Taurus. The houses are temples and locations for meditation and group therapy. This is all fairly suburban. The elements of everyday life are made special by the camera. This attention to the mundane was as much a practice of the early surrealist, Magritte, as it is now in my own photography. I like to look back at these legends.”(1)

Fictional film stills go back to 1977 when Cindy Sherman began her seminal and influential series which eventually amounted to sixty-nine images. While Sherman’s work commented on filmic construction of narrative, the equally fictitious strategies of movie-making and the fictional sensation of a moving image for the viewers, Anderson’s project is both more personal and imaginative. Her use of the term “benign cult” would indicate a residual degree of affection for a lifestyle that most of us would regard as strange if not actually abhorrent. Handing over one’s life-direction and decisions to the self-styled gurus usually running such outfits is not something many of us would ever contemplate doing - even without exposure of the horrors of misused power and the related sexual exploitation happening in many of them. Whether the staged darkness in Anderson’s images here amounts to “symbols for bigger concepts” in this sense must be left for individual viewers to decide.

The attempt to depict night in Western art has an interesting history. It emerges in the 14th century with Giotto’s generation taking the first, faltering steps towards something we call realism. The subject matter was wholly religious though, and telling nativity stories called for episodes involving caves, stables and shepherds in the fields by night. Initially, the foregrounds were lit as if by day while the skies grappled with varying degrees of sour, dark blues. It took another hundred and fifty years for artistic observation and technique to advance, allowing for an image such as Geertgen tot Sint Jans‘ Nativity c1490 to convincingly match foreground with background into an integral whole.

Over the following century ubiquitous religious subject matter was taking on a more domestic cast; still tethered to Biblical stories but expressed more personally. In terms of a night-time context, perhaps the apogee of this kind of intimate painting was Georges de la Tour’s practice in the 1630s and ‘40s. He did for darkness what his near-contemporary Vermeer did for light. A more exact contemporary was Caravaggio - an Italian shooting-star to the Frenchman’s more stable celestial body - one of the most innovative visual artists ever, who took the notion of realism to a dramatically new plane. His works were religious in title only: otherwise they were profanely but profoundly earthy, and his darkness more emotional and psychological than having much to do with the daily light cycle. In this way he was a precursor of the Romantic movement, a latter stage of which is called Realism by art-historians, and which in turn became a cradle for the birth of photography.

Early photography needed light like a sponge needs cream. Everything about the technology was primitive and plates needed long exposures for the image to register, so the idea of any sort of night photography was, practically, unthinkable. The nearest anyone came to depicting darkness was a by-product: the American Lewis Rutherford’s images of the moon in the 1860s and Englishman J H Nasmyth’s similar subject a decade later. But it was more about the darkness of deep space than the earth’s daily light cycle. By the 1880s, however, the technology had progressed to the point that, for instance, American photographer William N Jennings could make successful images of lightning flashes.

The 1880s also witnessed the birth of a much-maligned photographic movement called Pictorialism. It was an attempt by photographers to lift the medium from the mundane level of the documentary approach to the perceived higher level of art, so that any sort of raw depiction was spurned in the quest to create a mood. And the subtle gradations of tone and the suggested mysteries offered by night-time images fitted the bill perfectly. Edward Steichen’s 1904 The pond - moonlight is a classic example. Made precisely when Cubism was born - a time not only re-writing art but re-formulating the whole discipline of art history to reflect the values of Modernism - images such as Steichen’s didn’t stand a chance to be taken seriously while that great 20th century movement prevailed. “Straight” photography had no time for mood. Such was the force of this militant purism that Pictorialism’s manipulations were not regarded as being even “proper” photography but as some kind of aberration not really true to the medium.

With the demise of the Modernist framework, Pictorialism is now being regarded more sympathetically and assessed more thoroughly. Not only that, but in the past two or three decades both night-time as a subject/context and a more psychological sense of darkness have made a come-back in photography. These phenomena are not unconnected. It’s easy to recall the sense of unease meeting the appearance of, say, Peter Peryer’s early portfolios of Mars Hotel and Gone Home in the 1970s, and even Anne Noble’s early ‘80s Night Hawks series. They just seemed a bit bent somehow - not “straight” at all.

However odd and aberrant such work may have seemed at the time, it signalled a sea-change in photographic endeavour, and one those trained both intellectually and practically under Modernism still harbour reservations about. The old doubts about Pictorialism’s manipulations are now expressed as concerns about contrivance, which affects photographers across a whole range of practice from, say, Gregory Crewdson and Bill Henson (whose Paris Opera series is Caravaggio re-incarnated), to, here, James K Lowe and Yvonne Todd. Anderson’s a second-generation Postmodernist, so for her such concerns in no way inhibit her practice of stage-managing - at least to some degree - the entire spectrum of her oeuvre.

Anderson does two things with her darkness. Firstly she exploits it, using what light there is to foreground those details of her subjects she wants to emphasise - sometimes just barely perceivable outlines, their sinuous elegance undisturbed by any visual clutter. Her photographing a black swan at night is almost the down-under version of Alphonse Allais’ notorious 1883 painted gag First Communion of Anaemic Young Girls in the Snow which was a blank white canvas. But, as Peter Dornauf pointed out in a piece on this site recently (2) “The night is another country” and Anderson is its intrepid explorer.

Secondly, she highlights her darkness, literally, by using artificial lighting. As well as illuminating her preferred subjects, this strategy also illuminates the limitations of photography’s supposed realism, “the real” and “the artificial” being natural opposites. But, of course, it’s only real-ism, and since the artificial has its own reality, it’s as a legitimate subject for the camera as any other. That Anderson can present this conceptual complexity through such seductively simple images is a testament to her skill and a guarantee the images will maintain some length, avoiding Peter Schjeldahl’s chillingly-phrased destiny as “period décor”.

Half a century ago in the mid-‘60s famed photo-journalist Brian Brake successfully fulfilled an awkward assignment for Life magazine, taking about 18 months to complete. For a series on ancient Egypt he was required to photograph the enormously light-sensitive tombs of pharoahs with their painted muralled walls. In her essay in Te Papa Press’s 2010 book on Brake, Australian photo-historian Gael Newton quoted Life editor George Hunt: “He praised the photographer’s dedication to securing a picture by describing the technical expertise required to light the (previously unphotographed) Sennefer’s tomb. For conservation reasons the tomb could be lit only with a small battery light; neither flash lights nor hot studio lamps were allowed. Brake used a complex process of multiple and long exposures assisted by ranging a torchlight progressively over parts of the tomb until a complete, seemingly natural, image was constructed. It was the first tomb interior to be photographed in this way.” (3) In the ensuing years, as photography has been freed from its job of documenting, skill has taken on an entirely new, more personal cast. Brake was fighting the darkness. Anderson illuminates it.

(1) Magritte was hardly an “early surrealist” and many of the early, foundational surrealists were reluctant to acknowledge him later as a “true” surrealist at all.
(2) Three Artist Show in Hamilton, EyeContact site, 20 February 2015.
(3) Gael Newton, ‘The Colour Photo Essay’, in Brian Brake: lens on the world, Te Papa Press, Wellington, 2010, p.180/1.