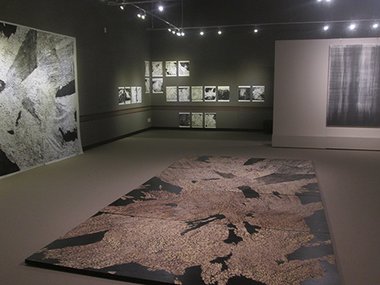 What is interesting about Keckes' woodcut images is the sense of obsessive markmaking - a bit like wood whittling or podding peas - where the hand takes pleasure in its own auto-pilot activity and leaves the mind behind. There is an attractive compulsive element where there seems to be no interest in preplanning or compositional structure, and cumulative positional elements evolve unforeseen, where directional patterns of gouged pockmarks whimsically chop and change.

On the far side of the large central courtyard within the Fo Guang Shan Temple - the spectacular Buddhist complex in Flat Bush, East Tamaki - one can discover on the righthand side, the Fo Guang Yuan Art Gallery, the hosting site for Irena Keckes and Nim Flora Chan’s Dialogues and Evocations: a conversation between woodcut printmaking and gestural (or calligraphic) painting.

As a gallery that is not a pristine ‘white cube’, but one with dark walls that maybe are more suited for suspended unfurled scrolls than stretched canvases or pinned up sheets of heavy paper, this venue - with Keckes and Chan’s show - has a surprising sculptural component through Keckes’ grid of inked plywood ‘plates’ ( on the floor as if a Carl Andre) and Chan’s line of rolled up scrolls on a table (like say,Walter de Maria’s brass rods). It’s an awkward installation, for contextual information about the art practices (videoed interviews and inked plates) is just as dominant a presence as the exhibited artwork - becoming a distraction.

Although Keckes’ very large print on cotton, Black Print #12, is impressive from a distance (its impact is considerable), close up her large images on thick paper - Black Print #10, and A thing without a Title - are far more satisfying. The impressions that the plate under pressure leaves on the soft paper - both inked and un-inked embossed indentations - have a delicious tactility.

What is interesting about Keckes’ images is the sense of obsessive markmaking - a bit like wood whittling or podding peas - where the hand takes pleasure in its own auto-pilot activity and leaves the mind behind. There is an attractive compulsive element where there seems to be no interest in preplanning or compositional structure, and cumulative positional elements evolve unforeseen, where directional patterns of gouged pockmarks whimsically chop and change. Where the unconscious mind leads to discovery upon the paper surface.

Yet it is almost as if the artist were indifferent to making a printed image at all, as if chiselling on flat wood is itself the fixation that provides meaning. (Assuming meaning is sought, and in the Zen Buddhist context of ‘no mind’ it may not be, judging from the processual action or final printed artifacts indicated here.) If one wanted to intellectualise and apply metaphor, it could be a satire on the addictive qualities of repetitive art production.

Keckes’ flowing clusters of inky marks, though they are very European in textural flavour (they could be a variation of Die Brücke) - as the show’s title indicates - have a dialogue with Nim Flora Chan’s investigation of Chinese and Korean calligraphy, even though formally they are worlds apart. Not only are they black on white versus grey, but comparing the two is also like contrasting scattered gravel with feathered strokes, or coarse straw bristles with soft silk tassels. One is strident and raw, the other delicate, finely wispy and understated. The two varieties of visual sensation press different emotional buttons.

What they have in common is a relaxation about mark control, an embracing of an element of chaos. Though this is obvious in Nim Flora Chan’s splattery calligraphic works like Flying Black, flying white, flying blind #3 (lots of affinities with Max Gimblett), or gridded (but wild) Brush walk #1 where opposing directions in ink application have been superimposed, some other works are comparatively tight - like the beautifully cascading and simple plane, Used Soot #1.

As I’ve already indicated, in terms of installation I would have preferred seeing less explanation and more finished works on the walls, particularly the scrolls. The information about working methods and theory (for their PhDs at Elam) could have gone somewhere else, if deemed absolutely necessary - but for the casual visitor I don’t think it is, as the physical processes and mental attitudes for example seem self evident.

If more room were available, the ‘voices’ of these two types of artwork would be heard more effectively, and interact and converse better than they do now. Despite the gorgeous attractions of the surrounding temple, the gallery itself doesn’t provide the running meterage wall requirements necessary for a fully articulate ‘conversation’ to take place. The spatial issues make the exchange too constrained and it doesn’t take off. It lacks momentum.