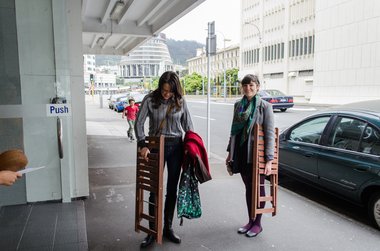 The event began with the approach. Participants were directed to a space downtown in the central business district, and requested to bring their own chair to sit on. In drawing near, I was already marked: a woman hailed me as I carried an old blue primary school chair down the street, having guessed correctly that we were headed towards the same place. In this relatively desolate area of Wellington, it was easy to see who else was attending as they appeared in the distance one by one, holding seats of many kinds.

Artists, chefs, and furniture designers
Concoction: an experimental collaboration between food and art at 11 Whitmore St.

I had made sure of what to say to him before I came to the table. “The Amanita Phalloides,” I said to him, “holds three different poisons. There is amanitin, which works slowly and is more potent. There is phalloidin, which acts at once, and there is phallin, which dissolves red corpuscles, although it is the least potent. The first symptoms do not appear until seven to twelve hours after eating, in some cases not before twenty-four or even forty hours. The symptoms begin with violent stomach pains, cold sweat, vomiting - ”
“Listen,” Charles said. He put down his chicken. “You stop that,” he said.
Constance was laughing. “Oh, Merricat, she said, laughing through the words, “you are silly. I taught her,” she told Charles, “there are mushrooms by the creek and in the fields and I made her learn the deadly ones. Oh, Merricat.”
“Death occurs between five and ten days after eating,” I said.
“I don’t think that’s very funny,” Charles said.
“Silly Merricat,” Constance said.
- Shirley Jackson, We Have Always Lived In The Castle (1962)

I wasn’t sure whether to eat the mushrooms. In art, as in most things, there is usually a catch.

Concoction‘s mission statement:
“Deviating from the conventional feast, the event uses the universality of food to spark conversations ranging from rituals of nourishment and social aspects of the dining table to critical implications of food production.”

The event began with the approach. Participants were directed to a space downtown in the central business district, and requested to bring their own chair to sit on. In drawing near, I was already marked: a woman hailed me as I carried an old blue primary school chair down the street, having guessed correctly that we were headed towards the same place. In this relatively desolate area of Wellington, it was easy to see who else was attending as they appeared in the distance one by one, holding seats of many kinds. The initial flows became palpable as each arrived, a convergence of strangers within the same space. An early attempt at a seating plan was genially relinquished.

Despite the collagic nature of Concoction, the presentation was slick: five tables of different shapes neatly laid with placemats and cutlery. These tables were made by multiple artists and craftspeople (variously, David Aravena & Chris Winwood, Matt Fanning, Tim Larkin, Duncan Sargent and Derek Winwood) in response to the curators’ request. Similarly, the artists were asked to respond to notions of food and power: Lear (2014), a video work by Cedric Barford, was split across a corner of the room, with a short looped clip of a jar of indeterminate, trickling goo. The video, initially somewhat opaque, revealed itself to be a contemplation of the potentially toxic canola oil, often used in cooking, and a comment on the dynamic of food-that-is-not-food.

A collection of small paper sculptures (Outer Cycle, 2014) by Kathryn Tulloch was spread throughout the room.

Four courses were served by Samin Son (artist), Riah King-Wall (artist), Amber Sturz (chef) and Maria Hunt (chef). Son’s contribution consisted of small baskets of plain unseasoned rice, as well as two wall hangings (Five/Seven Fish Swimming Upstream, 2014). King-Wall’s carefully curated platters of mushrooms were placed on the tables, providing an attractive counterpoint in form and colour to Tulloch’s small-scale paper sculptures. In turn, Tulloch’s sculptures fared better from being presented more definitively as centerpieces for the tables, where they could be observed, as opposed to the placement on pallets in corners of the rooms which seemed awkward and incidental.

Nevertheless, there’s a great deal of charm in the anti-monumentality of the show: in being encouraged to share space with objects and artworks at a more tempered pace than usual, without the seriousness and “sacredness” of artworks placed in a white cube space, and in favour of a relaxing, hospitable and homely environment. There’s a clear parallel here between Concoction and Gesamtkunsthandwerk (both the principle and the Gamper, Uprichard and Fritsch installation) in their properties of world-making, as well as the emphasis on the domestic, on craft, and on collectivity. To characterise the “domestic” as an exclusively feminine approach is clearly problematic, but the “homeliness” and motivation of nourishment in Concoction read to me as a positive disruption of the hard-edged and frankly masculine minimalism of most contemporary white cubes. It’s a format I hope to see more of.

One particularly engaging element of the show was the assorted contributions of young artist Riah King-Wall, which succeeded in weaving together modes of engagement. In King-Wall’s accompanying text, which serves as a bridge between her large-scale wall drawings (Amanita Muscaria and Tricholoma Ustale, 2014) and the mushrooms served to guests, the artist discusses the division of history in terms of “mycophilic and mycophobic nations: ie, those for and against the consumption of mushrooms”, a light-hearted suggestion of “perhaps one way of dividing the universe”, not unlike Michael Stevenson’s Barbas y Bigotes Sin Barbas y Sin Bigotes (2011). Like Lear, the work considers food-as-poison, or rather, poison-as-food, in terms of Western eaters’ poor understanding of mushrooms and their toxicity. Multiple conversations among the diners returned to the heaped platters of many different kinds of unusual (to Western eaters) mushrooms.

In considering Concoction, a useful reference could be Anton Vidokle’s discourse on the difference between a chef framed as an artist (as in Ferran Adrià’s inclusion at Documenta11) versus an artist who cooks: “it is interesting to note in comparison that Rirkrit Tiravanija cooks and is still recognized as an artist, though in reality he is only an average cook.” In this way, among others, the project differentiates itself from a group show or straightforward dinner function in favour of a curatorially motivated presentation. Neither the rules of art engagement nor the nitpicking critique of restaurants need apply (Shame not more people dining as lacked that crowded atmosphere; We needed Soya sauce to jazz up the rice; A Big Mac Burger combo would have definitely been more enjoyable: Service was poor, and they had run out of the oyster starter.).

While evaluation of food requires an entirely different set of codes and attendant reliance upon words like moist, unctuous or stodgy, none of which I’m prepared to engage with, I can say that the food was good and all diners seemed to enjoy it.

It’s a curious phenomenon. Pop-up diners are, by now, relatively well-understood, with their way of creating a small and temporary ecosystem (usually with a prix fixe menu) contingent on the materials to hand, and for the purposes of conviviality and restoration - so what is there to designate this experience as different from that, or indeed, from a conventional café or restaurant? What roles are attendees expected to fill? What scripts are they expected to select?

In Concoction, elements that I might expect from a café or restaurant were missing: for example, there was no music, which could have been a useful shortcut towards forming a relaxed, ambient environment. The lighting was - inescapably - harsh and dreary fluorescent tubing. These aren’t criticisms, but differentiating characteristics. Creation of these conditional spaces is reliant upon using the materials to hand, and frequently upon leaving no traces behind.

Food, in this space, becomes a portal: if you feed them, they will come.

This is much more a curatorial project than a group show, and I have investigated it as such, especially as all involved artists and collaborators have been assigned roles in the production of the event. To discuss the show otherwise would be to reduce it to merely an assemblage, simply the sum of its parts, and thereby miss the punctum of the event, which is the vacant and anticipatory space that the circumstances set up. Even in viewing the show during the day, as one might reasonably enter a gallery to peruse a collection of works, it reads as a placeholder for a past event wherein all disparate elements were interwoven. Though the plates have been cleared away, the space functions not necessarily as a show in its own right but as a stage or arena upon which something like a mise-en-scène is laid out, awaiting the movement of bodies within it.

Ultimately, Concoction‘s convergence of artworks, performance, constructed furniture and constraints of environment served to produce a network of gaps in which attendants could move about, connect, relate and engage in discourse, which circulated around both food and art. What better way to facilitate discussion of art than by putting people inside it? 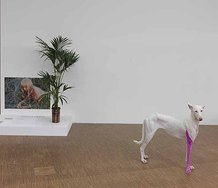