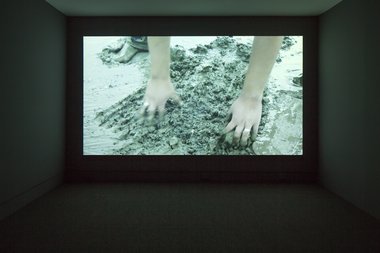 Te Ao (Ngati Tuwharetoa) is filmed in the Waimea estuary, Whakatu (Nelson), bodily involving himself through arm and hand movements with the dark silty mud - gathering and digging it up, scraping and spreading - actions performed in tribute to the great explorer Rakaihautu who came to the South Island from Hawaiki circa AD 850, landing in Whakatu.

Set up in Te Tuhi, this continually running film screening programme is presented alongside the adjacent exhibition reviewed yesterday, some other supplementary films, and a weekend of performances on Old Mangere Bridge held at the end of November. Most of the eight films here selected by Eu Jin Chua, a senior lecturer at AUT, allude to Auckland’s southern Manukau harbour by implication (exploring parallel historical and ecological themes), for only one specifically depicts it.

That depiction is actually a backdrop to a dancer, Amelia Lynch, as she performs ‘dancehall‘ moves while purposefully striding the 246 metre length of the Old Mangere Bridge - whilst being filmed by Rebecca Ann Hobbs. With its soundtrack by Pieter Keyesz, this is a remarkably thrilling film, demonstrating the fluidity of Lynch’s supply twisting torso, rapidly flailing arms and bending knees, accompanied by a changing pace when Hobbs’ camera races ahead - only to slow down just in time to stop Lynch slipping out of the lefthand edge of the frame.

This colour film reminds me of Pina, the great Wim Wenders film on Pina Bausch, but is just as breathtaking and inspired - though much much shorter. Also the background activity, like people fishing, or passing cyclists, really enriches the normality of Lynch’s and Hobbs’ art. It is a fantastic juxtaposition.

Peter Wareing‘s black and white contribution, made on a stony Nelson beach, is quite different. Not really environmental in focus, it celebrates the history of painting, specifically Barnett Newman (the split screen provides a central referencing ‘zip’) and Titian (a crumpled reproduction is found amongst the driftwood). Despite these references this project is very much about the materiality of photography and sound, with the film flipped sideways to formally accentuate the central edge, being partially played backwards, and accompanied by a raucous soundtrack of spluttering motorcycles on a speedway track.

This film, like many others Chua has picked, can be found on the Circuit website. The method of split screen is also a crucial element in Lucy ‘Aukafolau’s project, Invisible Territories, a work that has two sections, one of a boat approaching in daylight two small jungle-covered islands separated by a narrow channel, and the other, filmed at night, of the loading of goods and disembarking of passengers at ‘O’ua Ha’apai, Tonga. The two butted together screens become symbols for points of geographical location (or boat and wharf) - and the sea that separates and links them.

Turkish/Bulgarian film-maker, Ergin Ҫavuşoğlu, contributes Poised in the Infinite Ocean, a film with a three part screen that features a gripping text written and recited by journalist William Langewiesche. It deals with the dangerous life of sailors working on rusty iron ships that are badly maintained and easily pulled apart by storms. Hauntingly poetic images of a house at night, an approaching storm and a searchlight in a grille are dramatically lit as they tangentially link up with the Langewiesche voiceover. This was one of the peaks of Eu Jin Chua’s selection.

Sarah J. Christman‘s contribution is a two part film based on the activity in the Gowanus Canal, located in Brooklyn, New York. She films gorgeously coloured (but toxic) mud samples taken by another artist, Jenifer Wightman, then some oil slicks on the water surface and the contaminated canal bed with its small fish, and then finally a barge being loaded up with scrap metal with a digger. I felt the film lost its way with the barge inclusion, that the earlier section was really hardhitting and sufficient by itself.

Shannon Te Ao and Iain Frengley’s Untitled (After Rakaihautu) was first shown in the admirably selective Waikato Art Award put together in Hamilton by Caterina Riva a few years ago. Te Ao (Ngati Tuwharetoa) is filmed in the Waimea estuary, Whakatu (Nelson), bodily involving himself through arm and hand movements with the dark silty mud - gathering and digging it up, scraping and spreading - actions performed in tribute to the great explorer Rakaihautu who came to the South Island from Hawaiki circa AD 850, landing in Whakatu. This legendary chief is believed to have travelled south through Te Waipounamu, ‘shaping and creating landscapes as he went.’

Murray Hewitt‘s very short film of the sparkling waters of Petane, Hawkes Bay, has a voiceover where he has sardonically taken words from John Key’s State of the Nation speech and recontextualised them (but keeping their sequential order) to make a ecological, green-sensitive advocacy. Though made perhaps in the spirit of optimism it comes across as black humour.

The longest work in the series is Wolfgang Lehmann and Telemach Wiesinger’s Sea, made with digitally transferred 16 mm film. With stroboscopic flicker and dissonant string soundtrack, the images feature shots of the sea and its endless vista of rippled waves. Sometimes these black and white images are inverted or tilted over or even played backwards. The first five minutes is fantastic but the film soon becomes repetitive and tedious, something that with its shrieking musical score by Misato Mochizuki - and a length of fifteen minutes - might be intended.

Eu Jin Chua has organised a mixed bag of films. The Hobbs and the Ҫavuşoğlo works are exceptional, so this is worth making a special trip to see.