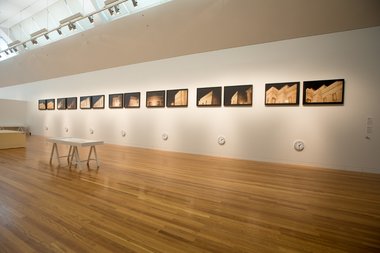 There are the beginnings of an excellent show in Framing the Museum. You'd think there'd be plenty of work from the last 30 years to include in an exploration of art's relationship to the museum. Instead exhibited is a largely familiar range of works from the late 70s and early 80s.

Te Papa is looking tired. The wear and tear on the furniture is visible. As if emphasising the point, a dinosaur skull has temporarily replaced the Britten V1000 Racing Motorcycle on display in the Level Four cafeteria. Te Papa is feeling its age.

I needn’t harp on. About the reduction of space and place devoted to contemporary art - we’ve been there. The museum’s leadership and its staff turnover - we’re all over it. A new broom, chief executive Rick Ellis has arrived.

When I visit a beautiful bouquet of white lilies is in the foyer, touchingly in tribute to the late marvelous Jonathan Mane Wheoki. Its freshness buoys me. Mane Wheoki inspired. As Head of Visual Arts and Culture he bought some strong thinking to the rehang of the national art collection as Toi Te Papa, notably bringing Maori carving and painting into the exhibition weave of our art history. As Roger Blackley commented recently in a tribute to Mane Wheoki, “an unofficial apartheid remains customary in New Zealand”. Mane Wheoki was bold in bridging Maori and Pakeha worlds.

Here though I look at contemporary aspects of the current hang of the national collection on Te Papa’s fifth floor - work from the last 30 years. Right now, boldness is again required. This time, to better reflect art over recent decades.

Just as the published history of the shifts in art in New Zealand since the ‘80s remain scant, analysis of it at our national museum within the context of art history have been cautious. Even in relation to 2011-12 exhibition Collecting Contemporary - with its focus on recent acquisitions - Peter Ireland commented in these pages about the “difficulty of getting “a fix on” what the show’s about beyond a general showcasing.” Since then, we’ve seen a welcome faster turn around of exhibition spaces (currently every six months), but a lack of connecting past with the present, and to really get stuck into meaning remains. The re-presentation of a seminal jewellery show Bone Stone Shell with a survey of jewellery practice since was for me a notable exception.

Short term installations of currently in the long light-filled ‘Boulevard’ space include two works from Bill Culbert’s 2013 Venice Biennale exhibition, a small suite of works covering twenty years of Peter Robinson’s practice, and, Framing the Museum a selection of art concerned with museums and galleries and the values that underpin them.

In the next set of rooms, Anonymous Bodies is a smartly curated selection of international black and white photographs of the body from the 1950s to 80s, and (following Collecting Contemporary) Collecting Modern, a consideration of the changes in collecting policy of the late National Art Gallery through a selection of work.

Together it gives the unfortunate, wrong impression that, with the exception of big-ticket items from established Biennale linked artists, Te Papa’s collection of contemporary work stopped sometime in the 1990s.

There have been exhibitions on the history of collection a few times before. I’m not sure who they appeal to. Yet more thematic focus on art’s relationship to the institution only emphasises a sense of inertia. It is safer to talk about the politics of the institution than the way artists’ ideas connect to the world. It gives the impression that Te Papa’s curators are being given limited space to develop their own ideas.

Meanwhile well beyond the gates our artists are staging projects that bring together different aspects of our culture. Two recent examples spring to mind: Fiona Jack’s consideration of the aesthetics and role of banners at Fresh Gallery, Otara, and poet Kerry Hine’s bringing together of the late 19th century photography of William Williams and her verse inspired by it at Mahara Gallery, Waikanae and the Auckland University Press published Young Country. Projects that are alive in the present in a way Te Papa has always sought to be.

There are the beginnings of an excellent show in Framing the Museum. You’d think there’d be plenty of work from the last 30 years to include in an exploration of art’s relationship to the museum. Instead exhibited is a largely familiar range of works from the late 70s and early 80s. It includes the timely showing of Billy Apple’s gallery and magazine interventions, Barbara Kruger’s superb Untitled (We are Unsuitable for Framing), Christo’s drawings of proposed wrappings of museum buildings, and a Guerilla Girls’ poster stating ‘The Advantages of Being a Woman Artist’ (e.g. “Having an escape from the art world in your 4 freelance jobs”). I don’t recall seeing Hans Haacke’s 1975 artist’s book Framing and Being Framed before. It documents his projects’ critique of institutions - placed in a vitrine we’re offered a small but fascinating peek.

Of note is the 1983 installation re-presentation of Peter Roche and Linda Buis’s 1980 performance Museum Piece. Pairs of black and white photographic prints of askew, quick night time shots of the exterior of the Auckland War Memorial Museum are presented in a line.

For the performance the pair circled the museum, each taking an image of the exterior every 20 minutes. In installation a clock hangs low on the wall below each pair of photographs, marking these breaks in time, emphasising photography’s temporal nature. Both the camera working in poor light and the white stone edifice lend an anaemic effect - life is drained from subject and object. The difference between the individuals and their outlooks is not readily discernible. The work stresses the individuals’ dislocated relationship with the institution, endlessly circling a memorial to the war dead. The reflection on Te Papa is again unfortunate. Thinking today of the proliferation of CCTV and smart phone cameras, the elements work together to create an ambiguous dark sense of a counter-surveillance attack on the state. Time keeps on ticking.

The introductory wall text for Framing the Museum has a bullet-pointed list of questions. Who decides what is of value? Are women fairly represented? What role does the art market play? Etc. It reads like a school education pack. It points to the breadth of the exhibition’s brief, and the lack of space and scope of work to really explore the questions it raises.

The labeling of Bill Culbert‘s work is also unfortunate. We read of Venice: the magic of seeing the canal through the doors, the light of the lagoon at the entrance. But we’re not there. The Te Papa space by comparison is like a big version of a Culbert milk container. The work misses the environment it was charged by: the interaction of Culbert’s floating floorwork with water, and his hanging fluorescent tube intersected dining table and chairs with architectural details.

In the central hands-on interactive area on level five Kerry Ann Lee has been commissioned to provide three works for light panels set in tables, from which visitors can trace shapes to make their own zines. Knowledge on a beam of light presents a cornucopia of colour-coded objects across era and culture sourced from images available for download online from Te Papa’s collection. Reducing objects to the same human hand scale, they are arranged to present a prismatic-inspired rainbow spectrum of colour. She topsy-turns tips out everything onto a new whimsical level playing field, not of one place or another.

Lee opens out the visual otherness of the artefacts of the museum, celebrating difference and individual selection. Interspersed amongst the objects is a range of questions sourced from internet-based quizzes challenging you to construct your own identity. Perhaps she also questions the open-endedness of our access to information. An opportunity is missed to present this commission in the context of Lee’s practice, or of work that operates, say, in similar encyclopedic ways (Peter Madden comes to mind).

What is wholly satisfying in the current Te Papa hang is the lively conversation between the works of Peter Robinson in Retorts and Comebacks. There is much to recommend a mini-survey like this, where half a dozen works give a clear picture of some strong threads running through a long, diverse practice. As the lovely title also suggests there’s a lively animated set of challenges through conversation made between the works, and Te Papa’s collection. Robinson’s visually striking exploration of codes, playfully opening out layers of meaning and function, and busting out sanctimoniousness of language being only of one tribe or another is well played out.

Language is the constant. The bulbous witty spare abstraction of the wall sculptures ‘Tongue of the false prophet’ (1992), with their affinity to taonga, punctuation and any number of visual vocabularies, are in strong conversation with the recent game-playing compositional complexities of the talking sticks of Defunct Pnemonics (2012). Defunct carries a tight animated tension as a group. They are lain on the floor or leaning against the wall, as if about to roll out their layers and speak their tongue. Again they feel at one here with the similar binary code Is and Os of Peter Robinson’s Venice work, I exist I am not another I am (2001), where existentialist texts are embedded in the tukutuku-like panels. This whole suite proves a rewarding companion to Robinson’s strong set of new felt works, shown in Diversions at Peter McLeavey Gallery in November.