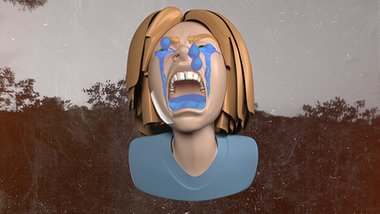 With Carpenter's referencing of the L=A=N=G=U=A=G=E movement and its incorporation of the equal sign as a pointer to the democratising of creativity and multi-authorship, the participation of several authors, we see the rationale for her unusual incorporation of projects that normally are assumed to be cultural opposites: exemplifying mass appeal versus rarefied elitism. These are creative activities that rarely overlap, each having an audience that often is disdainful of the other; where notions of ‘highbrow' and ‘lowbrow' are believed to be mutually exclusive, both taken seriously as superior taste, and never veered away from.

One of the founders of Gloria Knight, Juliet Carpenter is admired by her peers for her remarkable HD videos such as Shy Genius (2013) and Luma Turf (2013), complex, meticulously scripted works with careful voice-casting, calculatedly ambiguous layering, sophisticated love of language and interest in installation. Silent Treatment, her new fifteen minute work - shown in a (sadistically) seatless space washed with red light - is more obviously structured, with three clearly discernible sections. There is a middle portion of scripted voiceovers set against shots of Auckland treescapes and what seems to be striated, light contaminated, black/white film, and this is bracketed between audio sections of ‘cynical’ and ‘sincere’ music at beginning and end.

The first section visually just has a blue screen, and appears to reference both Derek Jarman’s Blue (a film about his dying from AIDS, with audio voiceover and solely blue field) and blue backdrops used for chroma-key subject superimposition. The sound consists of Randy Newman’s shockingly black song, I want you to hurt like I do, a track from his 1988 Land of Dreams album that is about fathers perpetuating the spread of suffering caused by their sins by deliberately contaminating the lives of their children - blue being a signifier for intense misery: feeling and/or causing it.

The second section features Carpenter’s own writing, as recited through the voices of an elderly man and woman. It explores aspects of L=A=N=G=U=A=G=E poetry, the radical American work promoted by Charles Bernstein and Bruce Andrews in the late seventies and early eighties that was deeply aware of its own materiality, leftist worldview and organisational textual structures. L=A=N=G=U=A=G=E has some similarities in its love of innovative restructuring procedures to the European group Oulipo but in general is much less playful. Nevertheless Carpenter’s script includes peculiar little aphorisms like ‘preference is an asterisk’, or ‘give up the first and second hand of memory’.

There is a manifesto from another writer that introduces the ethos of this avant-garde, line-based, anti-expressive writing approach, while the filmed imagery (often darkly under exposed) is of mangrove and pohutukawa trees, estuary mudflats and clay banks, with a perturbingly intense young woman in a red pullover clambering between branches. The digitally ‘damaged’ black and white film-stock, with scratches, specks and smoky yellow light-bleeds, seems to echo the briefly depicted globular secretions of salt on the leaves of the mangrove tree, for in broader terms, the choice of botany appears to metaphorically reflect the twisted bitterness and destructive sensibility of the character earlier revealing himself through Newman’s lyrics.

The last section however in contrast is almost all music, and has very little spoken language at all. Featuring the famously haunting piece of music by Pink Floyd, The Great Gig in the Sky, we initially hear a man faintly muttering “I am not frightened of dying. Any time will do - I don’t mind.” before the tune rises up through some extraordinary orgasmic scat singing by session musician Clare Torry, while on screen we see a turning, digitally constructed woman’s head - with blue tears pouring down her cheeks and filling her mouth.

These tears in taste perhaps allude to the salty secretions of the middle section, and this part of Newman’s lyric from the beginning:

With Carpenter’s referencing of the L=A=N=G=U=A=G=E movement and its incorporation of the equal sign as a pointer to the democratising of creativity and multi-authorship (1), the participation of several authors, we see the rationale for her unusual incorporation of projects that are commonly assumed to be two cultural opposites: commodities that have mass appeal (and are salable) versus process based writing that is densely verbal, obscure and unabashedly elitist.

These are creative activities that rarely overlap, each having an audience that often is disdainful of the other; where notions of anti-expressive ‘highbrow’ and soulful ‘lowbrow’ are believed to be mutually exclusive, both taken seriously by their followers as superior taste, and never veered away from. It is this embracing of ostensibly incompatible genres within an unforeseen hybridity, along with an examination of ‘detached’ versus ‘emotional’ signifiers, that makes Carpenter’s video with its hatefilled title so unusual. It shows one artist’s insatiable curiosity (and humour) - creating, with its unanticipated juxtapositions, resonating results that are utterly intriguing.

(1) For a thorough discussion of L=A=N=G=U=A=G=E poetry and multi-authorship see Barrett Watten’s The Constructivist Moment: From Material Text to Cultural Poetics, Wesleyan university Press, 2003, especially Chapter 2, ‘The Secret History of the Equal Sign: L=A=N=G=U=A=G=E between Discourse and Text’, pp 45-102.