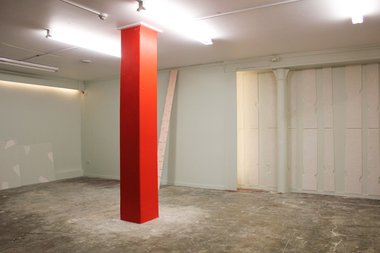 Instead of endless vistas the closed in space of the gallery denies any sense of the outside world - the lack of windows heightening the studio ambience of the space. Instead it seems self-contained, the installation acting as a whole to give an impression of an abstract painting made spatial. The irregular bands, panels and taller beams create a sense of basic structures and supports, so that the whole arc of building history might be contained within this exhibition, from primitive huts, through to modernism via classical columns.

Things appear and disappear quickly, exhibitions are announced and closed within a matter of days. In such an atmosphere of change it is exciting to see artists take on ambitious projects and Amy Unkovich’s latest show at FUZZYVIBES certainly delivers. As part of a series of collaborative shows, the artists have been charged to add to the initial propositions of curators Ophelia King and Nina Lloyd. The usual white walls of the space have been boldly partitioned in shades of palest pink, seafoam green and midnight blue. The central pillar in the space has been painted a vivid poppy red, and if these names sound like a catchphrases from the latest home colour charts, then that’s exactly what they are.

Unkovich’s previous works at Window used architectural fabrication techniques and material as an armature to explore painterly concerns of composition and space. In the artist’s hand the initial premise of beside the point takes on another meaning. Here these ideas have been expanded into the very architecture of the space. Using existing architectural features as compositional devices, the artist constructs a temporal viewing experience measured in bars of floor, wall, door, column, pipe. The pastel tones and brighter accents recall home decorating magazines along with their aspirations for modern living.

Irregular polygons of plaster have been affixed to the columns and lean-to panels. Their crystalline forms have a cartoonish character, recalling the patterning of polished concrete and composite marble. This technological innovation has replaced traditional and costly materials in many homes, yet the plaster surfaces of Unkovich’s work have all been intensely worked and betray their hand made status. These gestural marks invoke the vernacular of painting, as well as of stuccoed walls. The panels themselves have been covered in plaster and a veneer of paint fixed on top. This surface finish and the pastel tone combined brings to mind retro Formica furniture. These throwback gestures seem a sly dig at the lofty ambitions and aesthetic purity of geometric abstraction.

It was during the early twentieth century that such substitutes as Formica became available to home-makers, and also when Modernist architecture began styling domestic interiors into open - or free-plan spaces. The space directly under the stairs has been painted the darkest shade. Here the matte surface of the wall meets the glossy reflection of itself on the floor. The floor has been flooded and the shallow pool of water breaks the static monotony of the space. Yet in Unkovich’s reworking this also has been appropriated as another plane in the space, almost a nod to that very modern-est of structures. But where Mies van der Rohe’s Barcelona Pavilion epitomised a logical conception of space, Unkovich is more haphazard.

Instead of endless vistas the closed in space of the gallery denies any sense of the outside world - the lack of windows heightening the studio ambience of the space. Rather it seems self-contained, the installation acting as a whole to create a sense of an abstract painting made spatial. The irregular bands, panels and taller beams give an impression of basic structures and supports, so that the whole arc of building history might be contained within this exhibition, from primitive huts, through to modernism via classical columns. Yet I would be reluctant to suggest that Unkovich’s work makes any claim on the imperative to integrate art with life.

The inherently antagonistic relationship between architecture and painting has been given a superficial guise - less domestic or private space than a provision language of the inside - yet I find the installation nevertheless engaging. There is a playful aspect to the show, and as I retreat up the steps with a backward glance I notice for the first time the large pot plant placed above the door. This becomes a kind of ‘creative flourish’ that could also be a humourous jibe - the painter’s joke.

The layering of materials and histories in the combined works are less clearly delineated - there is a roughness and experimental quality that allows for porous meanings. While it may not have the longevity of architecture, it is an intriguing idea to allow artists act upon each other in a symbiotic manner, and I hope the next renovations will be just as exciting.