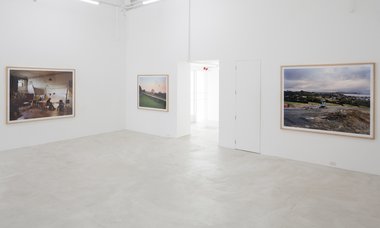 The light, the local Auckland (New Zealand) light - and at times summer heat - he captures can be amazing. And the acuity too with the lens, for every detail included - no matter how far away - is always in astoundingly crisp focus. But the question invariably arises, is that enough? Corson-Scott's images are unabashedly prosaic; you could also say ‘clinical', and lacking in poetic layering, mystery or humour.

Although he has shown his work in various group shows in Auckland, such as for example those held in Snakepit, this exhibition is Chris Corson-Scott’s first solo dealer presentation. He has ten framed photographs displayed around the central space of the gallery, while one other less thematically consistent work is included in a peripherally located stock show by the long window. Known for his long exposures using an 8 x 10 inch view camera, this artist makes large images that are in colour, though nothing as spectacular sizewise as say Gursky or Wall overseas.

The light, the local Auckland (New Zealand) light - and at times summer heat - he captures can be amazing. And the acuity too with the lens, for every detail included - no matter how far away - is always in astoundingly crisp focus. But the question invariably arises, is that enough? Corson-Scott’s images are unabashedly prosaic; you could also say ‘clinical’, and lacking in poetic layering, mystery or humour.

You have to ask yourself - especially when there is an accompanying blurb from legendary critic Michael Fried claiming Corson-Scott is a mature artist - can these images compare with the quality photography of say Richard Orjis, Yvonne Todd, Peter Peryer, Jae Hoon Lee, or Mark Adams (who also uses a view camera)? Many of Corson-Scott’s works are underwhelming in the sense that beyond their vivid detail, accurate documentation of meteorological conditions and interest in encroaching urbanisation and erosion of natural resources, there is little else. Nothing compellingly memorable or distinctive.

However while about half of this show is simply too bland - especially the shots of suburban house construction, or certain bush scenes inspired by Cezanne - there are six images that are worth zeroing in on for pleasurable lingering.

Mark Adams Retouching Photographs at Studio La Gonda (2013) plays on the fact that most artists are curious about other artists’ workspaces, the stuff lying around that either inspires their practice or else is a technical means for its implementation. As furtive nosey-parkers most of us like to see what sort of paraphernalia (specific equipment or books) other people accumulate, and (amusingly) the state of their walls: in Adams’ case (with the studio complex he co-owns with Haru Sameshima) the plaster smears over the cut Gib by the window leap out.

In Looking East on Big King (2013), we see a yellowy peach-coloured sky reflected on the upper surface of a long pipe and on the skyline a diffusely spongy tree echoing some nearby wispy clouds. The lushness of the soft green grass is a foil for the unforgiving solidity of the receding (sewerage?) pipeline.

With Kotanui Island and Rangitoto (After John Kinder) (2013), the sunlit rock formation of the tiny island in the centre looks like a flame shooting out of the dark sea - in contrast with the cold yellow horizon. This solid rock cone looks evanescent and surprisingly gaseous, and may be intended as a clever allusion to undersea oil drilling.

In Land development beside Waikumete Cemetery (2014), we see in the midst of a cluster of intense landscaping and road-building a blurred truck reversing (or accelerating) as earth is shifted. Meandering through the straggly remnants of native bush an undulating green hose, for introducing water, snakes its way across the bottom lefthand corner. The reptilian (Edenic) suggestion could be calculated.

Rain over a Development on the Whangaparoa Peninsula (2014) presents us with grey slab fences setting out property boundaries, along the edge of the construction of a street and piled up granular elements that collectively make up a Macadam surface. The image’s turbulent sky repeats the greys and blues conspicuously present elsewhere in the photograph.

From Clark’s simultaneous Summer Salon stock show, New Year’s Day (2013) depicts the crowds on St Heliers beach, evocatively suggesting the shimmering heat and the sound of kids playing in the sand and water. Viewer interest comes from scrutinising the tiny static bathing-suited figures and how they are interacting - and whether one might join them when they return to this beach in two weeks time.

hmmm. John. Photographs in art gallery exhibitions are hard to deal with because of the ubiquity of photographs in the ...

Hi John I am not sure if you could have got this exhibition more wrong. I visited it in Auckland ...

Hi John
I am not sure if you could have got this exhibition more wrong. I visited it in Auckland two weeks ago and for me, it rated as one of the best shows I have seen over the past year. I love the deceptiveness of the 'documentary' nature of all these images and the way that they kept on reminding me of the 'great' traditions of Western art. (affectionate, but completely conscious of the baggage...) The Mark Adams image of the artist in his studio alone makes this exhibition worth seeing. Vermeer, Caravaggio, Malevich - It's a stop-you-in your tracks moment in the space of the gallery - an image that elicits absolute silence and contemplation. I cannot think of anything else I would want from any artist or their work.

hmmm. John. Photographs in art gallery exhibitions are hard to deal with because of the ubiquity of photographs in the world. To talk usefully about them the reviewer must have a complete knowledge of the entire history of the medium and the history of it's use by practitioners in the realm of art in the world as a whole and in this case our world here in this archipelago. We know this anyway or should know it. Point is the review sounds dumb which isn't helpful either.

It actually is worth noting what Michael Fried said about Chris's work. He is an experienced looker and thinker. It is not useful to describe subjects as bland. All subjects are bland all photographs are bland, or interesting. Attachments like the bland or the romantic or the poetic are not attributes that attach to the photographs but are carried to the photograph by the viewer. The perceptive photographer wields these. There is no hierachy of subject matter. All this is too complicated to encompass in a brief review or comment however my comment is that you are mistaken about this work. In the end it boils down to do they look like images I want to have dealings with and to me they do for reasons which don't need to have anything to do with the above world history but just to do with the medium, our history and present...... ......
Merry Christmas