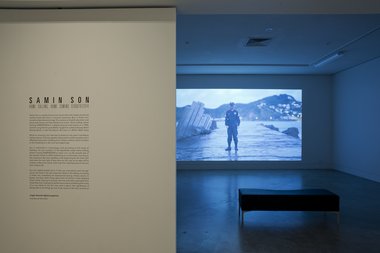 The soundscape removes Son's voice. He staggers around, traumatised, mad even, his fists clenched, calling out against his muteness to the point of tears. It may all sound rather melodramatic, but the pathos feels like it is coming from somewhere true. Son reaches out to the universal, expressing our pain and longing in a way strong performers have done so for us back to the ancients.

Solo is the second in a two-yearly exhibition at the Dowse for which the museum commissions new projects from five Wellington artists for the five different antechambers that comprise one of the museum’s galleries. This year the artists are: Ruth Thomas Edmond, Karl Maughan, Peter Trevalyan, Moniek Schrijek and Samin Son.

Each artist gets a significant space to extend themselves, while still being put in conversation with the other. The title Solo holds. Beyond careful selection there is no attempt to impose a theme or links between them. It’s a strong model for both recognising and developing local excellence. It gets behind the artist to go big, rather than in front of them, curatorially to fit in. Distinct differences in media and approach are celebrated - although the description of it as a ‘snapshot of contemporary art practice in Wellington’ is overblown.

I focus on one work from the relatively strong 2014 company, Samin Son’s single channel projection Home Calling, Home Coming 070007072014. The most affecting, it is also a notable progression of the presentation of this distinctive young artist’s ideas for exhibition, bringing together his strong engagement with sound, video and performance.

The title timestamps the performance: seven am on the seventh day of the seventh month of 2014. Apparently in numerology the number seven is lucky for this Korean born artist. Luck was something he was after this last winter. Resident in New Zealand since he was 13, at the time of filming he was working to gain a New Zealand residency visa, fearful that he had little time left (shortly before this exhibition opened it was approved).

Samin Son’s performance actions have constantly challenged the steadiness of his and our grounding. They have been strongly informed by the two years of Korean compulsory military service that interrupted his fine arts study at Massey University. The two experiences have become fused.

Home Calling, Home Coming is sited at a place of arrivals and departures - out on a concrete breakwater at the end of the airport runway in Lyall Bay, Wellington. This form is framed as stage set by the camera. Before Son’s performance even begins there’s a sublime tension between nature and human construction. Sea breeze drifts across the screen, as big rollers come in off the Strait explosively meeting rock. We shouldn’t be out here. Giant concrete slabs are propped up like shields against the ensuing waves, braced by bare concrete reinforcing rods. Waves hit the breakwater with great force at times, and on occasion cause a graceful plume of water to erupt into the air through a blowhole spout in the concrete floor. Framed like this, I find myself reminded of the tensions between form and nature as espoused by a modernist sculptor like Barbara Hepworth; kinetic wonder to rival Len Lye’s Water whirler in Wellington harbour.

It is dawn, a time of new beginnings. A lit orange windsock wafts gently against a violet sky. We hear a plane just above our heads preparing to engage landing gear with tarmac. Over the bay in the distance lights in houses start to turn on and twinkle.

Son begins, as is his custom in Korean military uniform, boots and cap. His face is blacked, as if coming out in to the day from a nighttime military operation. In Europe it was once common in folk performances for faces to be blacked to represent the long nights of the middle of winter.

Son stretches his body against the concrete ramparts. At first he behaves as if he has an army at command: yelling out orders, carrying out an inspection whilst chanting, leading star jumps. But then he tests his endurance, putting himself in what I think of as one of the most subordinate positions possible: legs outstretched, head on the ground, arms behind back. The roar of jet engines continues above, showers of spray cross him. The camera changes stationary positions frequently, in a manner not unlike a security camera.

Slowly the environmental sounds are replaced by a shimmering electronic aural wind. In turn it is interrupted by an insistent, reverberating industrial drumbeat, as if a pounder is being relentlessly rammed into the earth to compact it and secure stability against quakes. This is overtaken by a sharp strobing stutter, like a wave of feedback, drowning out all else. From within this a distorted looping chant and squalling guitar rise, like an existential howl from within the all-encompassing digital mesh that is our surround. It’s evocative of the sense of entrapment and dislocation from our physical space our computers can create in us.

During this Son begins a series of hand actions not unlike those employed in kapa haka, opening out with song to the forces of the natural world. The actions appear however to be Son’s own vocabulary, drawing from his different cultural affiliations.

The soundscape removes Son’s voice. He staggers around, traumatised, mad even, his fists clenched, calling out against his muteness to the point of tears. It may all sound rather melodramatic, but the pathos feels like it is coming from somewhere true. Son reaches out to the universal, expressing our pain and longing in a way strong performers have done so for us back to the ancients.

Then there is a shift. Son starts singing, and appears to be gaining strength in the song. His vocal track returns momentarily. He removes his cap, loosens and unbuttons his shirt, and more emotive stringed and vocal sounds start build waveringly towards distortion. Son removes his shirt and, with it, his make up. He has shed a skin. He appears to give thanks. He doesn’t triumph. He endures.

In the video’s final minutes the camera comes in close to Son’s face as he sings, before cutting to the wash of the water on the rocks and a recording. The song is a 1930s Korean wartime song that his grandfather taught him, ‘Gohyang Manli Sarang Manli’, or ‘My hometown; my love is a million miles away’. In his singing Son adds some English lyrics: “I see you everywhere even though you’re not there”.

The cinematography is beautiful in a way rare in local video art, or Son’s previous work. From the exquisite colouration of the dawn to the painterly richness of the breakwater with its rough mottled surface pooling water, reflecting the surround. With dynamic camerawork, strong editing and soundscape it’s unusually technically layered in a local context for a videoed work.

There are few artists locally that come to mind - Shannon Te Ao is one. In its shamanic calling out to the elements for grounding in the face of terror, and a subordination of natural instincts I am most reminded of the provocative imaginings of Lemi Ponifasio’s Mau dance company with its drawing on Pacific and Butoh performance inspirations and elemental electronic soundscapes.

Ponifasio creates powerful new images for reflection of our perilous state and place in the world. Son is showing some of the same potential. This work speaks of a determination, in the face of the elements, to be facing out and connected, whilst still planted here on the rocks of these shaky isles.

Son’s piece works well within in Solo. Its expressive energy and environmental interaction counterbalances the abstract reduction of the world the other cooler works provide through painting and objects. It opens the gallery out. Lets it breathe. You’d think the work’s scouring and blistering soundscape might be overbearing throughout Solo, yet with the speakers facing into the chamber the sound shimmers through the exhibition as a softer undercurrent.

It’s refreshing to see Son’s work given presence within such a diverse group of works. He steps up. Positioned so dramatically and aesthetically pleasingly in a conflicted site on our coastline, the work should resonate for the many who feel the tug between feeling at home here and the call of another home elsewhere.